In addition to the high level of confidence dealers are showing going into the new selling season based on the results of Farm Equipment's "2012 Business Trends & Outlook Survey," data from the USDA also points toward another strong year for farmers' investing in new equipment.

Historically, farm net income has been the most reliable indicator of farmer spending trends. In its August 30 report, USDA forecasted both farm net income and net cash income will exceed $100 billion for the first time during 2011. At $103.6 billion, the revised net income projections are 31% higher than the agency's 2010 outlook.

The forecast also calls for farm cash net income to increase by 16% year-over-year. In the report, the ag agency noted, "The 2011 forecast of net farm income is the second highest inflation-adjusted value recorded since 1973." 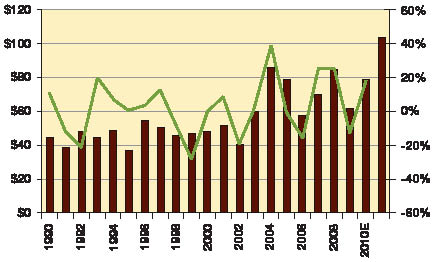 With the strong historic correlation between total farm net income and row-crop tractor sales, the forecast of rising net income for 2011 is setting the stage for strong overall equipment sales well into 2012.

While crop cash receipts are expected to remain high, rising by 19% vs. 2010 levels to $206.5 billion, livestock producers also appear to be back on solid footing as USDA forecasts an increase of 12% in livestock cash receipts, to $163.8 billion.

With the strong historic correlation between total farm net income and ag equipment sales, dealers fully expect that the momentum of 2011 will positively impact sales of ag wholegoods well into 2012.

A year ago at this time, equipment dealers exhibited a high level of confidence that the sale of new farm machinery would continue to strengthen throughout 2011. As it turns out, their positive view didn't go unrewarded as the demand for new equipment maintained its momentum throughout the year. 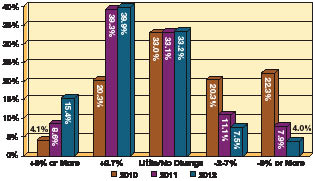 More than 55% of North American dealers expect 2012 revenues for new equipment to surpass the levels seen in the past year. Overall, 88.5% are projecting that revenues will be at least as good or better than they were in 2010.

This year, their outlook is even more self-assured. On a weighted average basis, the results of Farm Equipment's 2012 dealer forecast is for an increase in revenues from new equipment sales of 2.37% vs. 1.33% last year. 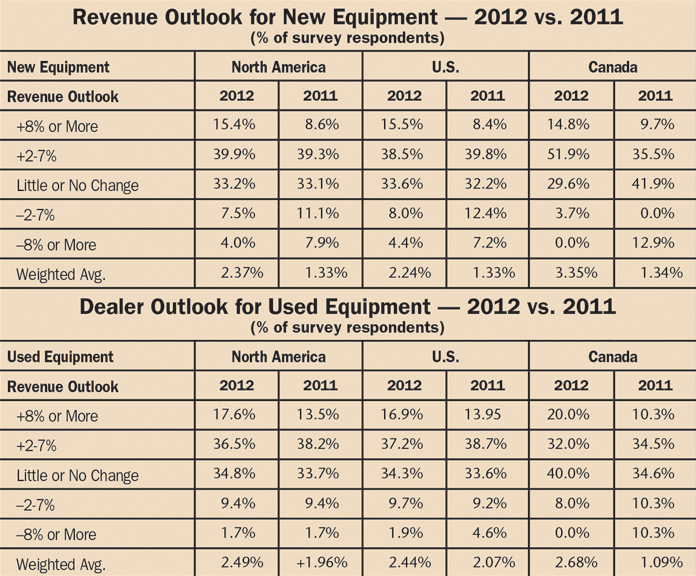 Overall, the "2012 Business Trends & Outlook Survey" indicates that over half (55.3%) of North American dealers expect revenue from new equipment sales to increase by at least 2% to more than 8% in the year ahead compared with 2011.

In all, 88.5% of dealers anticipate their 2012 wholegoods revenues from sales of new machinery will be at least as good or better than what they experienced in 2011. Only 11.5% of all dealers see their sales revenues falling below 2011 levels.

On a weighted average basis, dealers from Canada are looking for 3.35% increase for new equipment revenues vs. 1.34% at this time last year.

Despite some concerns about a buildup of used equipment inventories, particularly combines, most dealers say that the situation is manageable and they're confident that customer demand will hold up in the coming year.

More than half, 54.1%, of North American dealers anticipate increasing their sale of used machinery in 2012 vs. the prior year. In total, nearly 90% expect their sales of previously owned equipment will be as good or better than levels seen in 2011. Only 11.1% believe used farm machinery revenues will fall below what they saw in the past year. Less than 2% of dealers anticipate that 2012 used equipment revenues will come in lower than they saw in the last year.

Last year's survey results showed that slightly fewer dealers, 51.7%, projected higher levels of equipment sales vs. the previous year. This compares with only 28.5% who forecast their 2010 sale of used machinery would surpass 2009 levels. 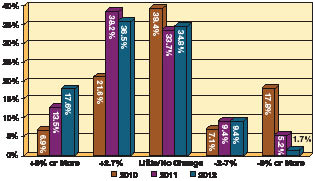 North American equipment dealers are anticipating a strong year in used equipment sales. Some 54% expect revenues for used machinery sales to improve by 2% to more than 8% in 2012. Nearly 90% are forecasting revenues will be at least as good or better than in 2011.

Dealers in Canada also see a healthy increase in 2012 used machinery sales. More than half (52%) say they anticipate revenues from the sale of used equipment will increase from 2% to more than 8% for the year. Another 40% expects there to be little or no change in sales revenues for used machinery, leaving only 8% who are projecting lower revenues in the year ahead.

Overall, Canadian dealers are looking for a weighted average increase in revenues of 2.68% for 2012 used equipment sales, well above last year's projected rise of only 1.09%.

As has been the case since Farm Equipment started its annual "Dealer Business Trends & Outlook" report in 2005, the GPS and precision farming systems product category heads the list of "Best Bets" for increasing unit sales in 2012.

These rankings are based upon the composite scores dealers assigned to 20 different product categories when asked, "Please indicate your unit sales projections for the following equipment in 2012 vs. 2011." The score is comprised of the percentage of dealers who indicate that they expect the product category to increase in sales by at least 2% and those who expect "little or no change" to the unit sales level of the product in the coming year vs. the previous year.

As it has in recent years, GPS and precision farming heads the list of products that have the best potential to improve dealers' unit sales in 2012. Others include farm loaders, mower/conditioners, 4-wheel drive tractors and windrowers/swathers.

When John Deere rolled out its new product line up for 2012 to its dealers and the media in August, John Lagemann, Deere's vice president of sales and marketing for North America, dubbed the current era the "age of telematics." Telematics is the technology that allows different systems and/or machines to wirelessly communicate with each other. With it, precision farming is moving into another level of sophistication and complexity.

As more farmers embrace these new technologies - from auto-steer to telematics - the dealer's ability to service and support the new systems will become a measure of his success. With the rising emphasis on precision farm products and systems, this year's survey also including "Precision Farming Specialist" to the question of which positions will dealers be looking to increase staffing. While there is no reference point to compare it with, nearly 20% of dealers say they want to hire people to fill the role of precision farming specialist in the year ahead.

This year, 96.5% of the dealers see the unit sales of GPS and precision farming equipment to increase by 2% to more than 8% or stay about the same as 2011. 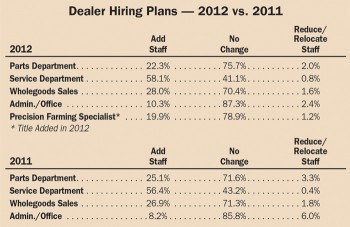 While they finished at the bottom of the list, combines (84.7%) provide for a difficult comparison coming off two exceptional years of sales. Nonetheless, nearly 59% of dealers project the sale of combines to be at least as good as it was in 2011, while 26% see unit sales growing by at least 2% in the year ahead.

Overall, sales of the various product categories of machinery are falling in line with dealers' expectations from a year ago.

As far as tractor sales go, dealers see 4-wheel drive units as holding the best potential for growing unit sales in 2012. Nearly half (47.5%) anticipate sales of all 4-wheel drive tractors to increase by 2% to more than 8%. Another 45.6% say unit sales of this tractor category should be about the same as last year. This put it number 4 on the list of 20 products.

The issues that concern dealers most have changed somewhat since last year, though the top concern, the increasing cost of new equipment, remained at the top of the list in 2012 as it was it 2011. In fact, four of the top five issues as ranked by North American dealers involve rising prices and costs.

More than 95% of dealers indicated that the high price of new machinery is "most concerning" or "concerning," while only 4.6% said they were "not concerned" with it.

Steel prices and supplies made the biggest leap, moving from 11th place last year to the 4th place for 2012. Nearly 92% of dealers say they're "concerned" or "very concerned." The availability of new equipment, the only issue of the top 5 that didn't involve pricing, is filling the 5th slot for the year ahead, moving up from the number 8 last year. Slightly more than 90% of dealers ranked it as "concerning" or "very concerning."

While still a major issue for dealers, the affordability of health care slipped to number 6 on the dealers' list of major concerns, from number 2 in 2011. Slightly less than 87% of farm machinery retailers checked "concerned" or "very concerned" about being able to afford health care benefits for their employees.

As far as increasing staffing in the year ahead, a slightly larger percentage of dealers have plans to hire for technical service, wholegoods sales and office administration compared with last year. On the other hand, slightly fewer dealers plan to add parts department personnel in 2012 vs. 2011.

With the growth of precision farming products, for the first time, the 2012 survey also added the position of Precision Farming Specialist to the list of hiring needs. In all, 19.9% of North American dealers report that they're planning to hire for this position in the next year. 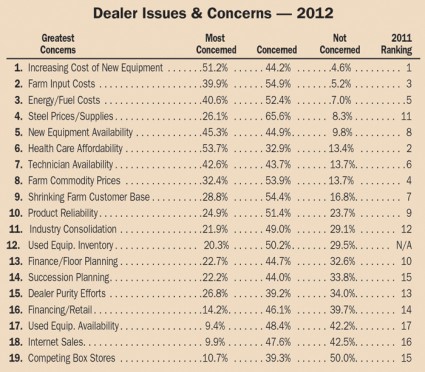 As usual, the biggest demand is for service technicians. More than 58% of dealers say they plan to add service staff in the next year vs. 56.4% in 2011.

In terms of how much and where dealers are planning to invest in their operations in 2012, higher levels of spending across the board.

In the year ahead, only 31% of dealers say the will not increase facilities or systems investments beyond what they did last year.

Nearly 5.5% of dealers report that they intend to increase their investment in facilities and/or business systems by 11% or more during the coming year. This compares with only 2.5% who intended to spend at this level a year ago.

The area of the dealership that will receive the most attention in 2012 will be the shop and service areas. Nearly 60% of dealers say they plan to make capital improvements in their shops. This compares with 48.7% who intended to do so last year.

More than 43% of dealers plan to invest in improving their showrooms in the year ahead.