When a farm equipment dealership decides to build a new headquarters, it is no easy decision. It requires many internal discussions and years of planning, with the ultimate goal of better serving customers both now and in the future.

Messick Farm Equipment, a 5-store New Holland and Kubota dealership based in Mt. Joy, Pa., recently purchased land and built a brand-new headquarters. Neil Messick, marketing manager with Messick Farm Equipment, says the decision was driven by a simple lack of space. The previous store in Elizabethtown, Pa., was a little over 100,000 square feet on 13 usable acres, and was established in 1952. The store was overdue for an upgrade.

The dealership is one of the region’s largest New Holland and Kubota dealers and sells products from numerous shortline equipment companies.

“We’ve been a consistently growing company for a number of years,” Messick says. “Any projection of what things look like 3-5 years from now was just extremely problematic. A lot of it was growing at the capacity of our business. Every one of our departments in one way or another was just really crunched for space.”

The new headquarters includes modern service bays in the service department, expanded shelving for the parts department, additional space in the sales department, a showroom big enough to park equipment inside and paved parking areas for customers and staff. The new 200,000-square-foot store sits on 28 usable acres.

“It took 4 years total, from the time we took the first steps to buy the property to our planning,” Messick says. “Three years of that was the planning phase. The actual construction itself only took a year, which was really surprising for as big of a project as it was.”

Messick notes it was challenging to find commercial real estate in their area, which has a lot of preserved farmland and few options for commercial construction. 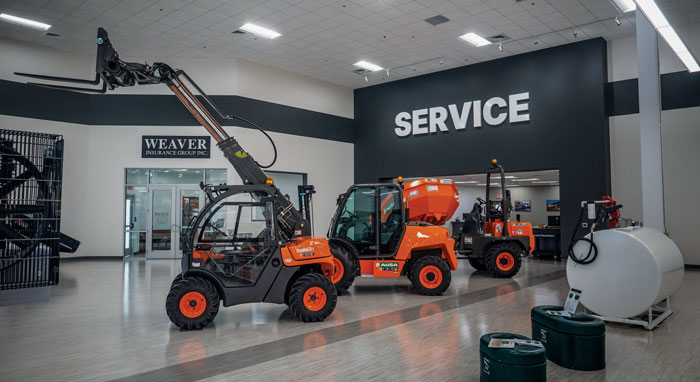 Messick Farm Equipment’s showroom now has the spacious capacity to park equipment inside so sales can continue even in inclement weather.

“We were paying Walmart kind of pricing for ground to be able to build on, so it was an extremely expensive project,” he says.

The planning process started with each department sitting down and thinking through how they can do things and serve customers better.

“That answer is different for every department,” Messick says. “For the sales staff, it was a better arrangement of offices for more privacy. We now have enough room to park equipment inside and walk someone around a machine when it’s raining. We have a room in back where we can pull a piece if somebody’s coming in to see something. All of those things contribute to improving the customer experience.”

Messick says upgrades were also made to make the dealership feel more like an automotive dealership, where lounges and food are typical.

“That’s a lot of our customers, when you’re talking to that rural lifestyle type person,” he says. “We improved those kinds of things to be a better, more comfortable place to shop that meets modern expectations.” 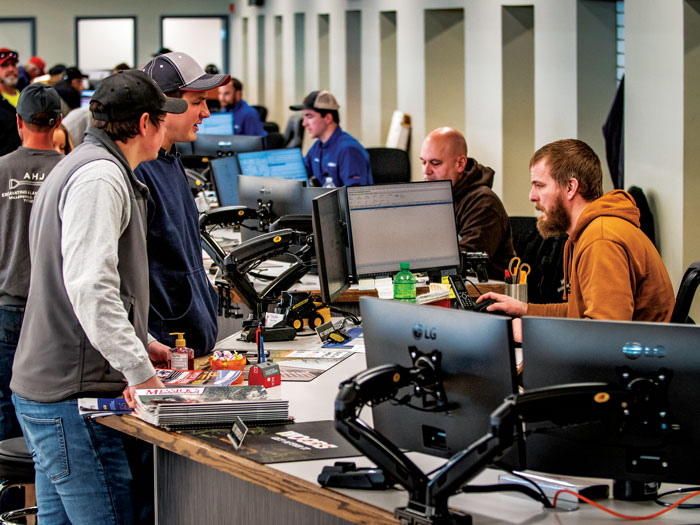 The facility expansion included additional counter space, so more customers can be waited on at one time — decreasing waiting time for customers and making for a better customer experience.

The parts department was revamped to improve speed and inventory, including additional warehousing and counters. The warehouse has 4 times the pallet rack space as before, the aisles are narrower — only 6 feet wide — and go all the way to the ceiling, which is 30 feet high. Special forklifts are used to go in to collect merchandise. Previously, the dealership had maxed out on counter space and still had lines of customers waiting to be assisted.

“We put in a lot of effort on the logistical back-end,” Messick says. “When you come to the front counter, there’s room for more people.”

“We created parking spaces in the shop for our road technicians’ trucks. It keeps the trucks out of the weather, and it makes the technicians more efficient because all their tools are right there with them in the shop…” – Neil Messick

“One thing we added that’s actually pretty unique is we created parking spaces in the shop for our road technicians’ trucks,” he says. “It keeps the trucks out of the weather, and it makes the technicians more efficient, because all their tools are right there with them in the shop.”

Messick Farm Equipment uses a service writer/service manager, automotive model in their business. Before moving into the new facility, staff were spread out and couldn’t hear each other.

“You don’t pick up that earshot idea of what the other person is doing when you’re not working beside them,” Messick says. “Now, they’re right beside each other with a window in the middle so they can hear what’s going on.”

Team members from Messick Farm Equipment visited some other dealers in the Midwest to get ideas during the planning process. 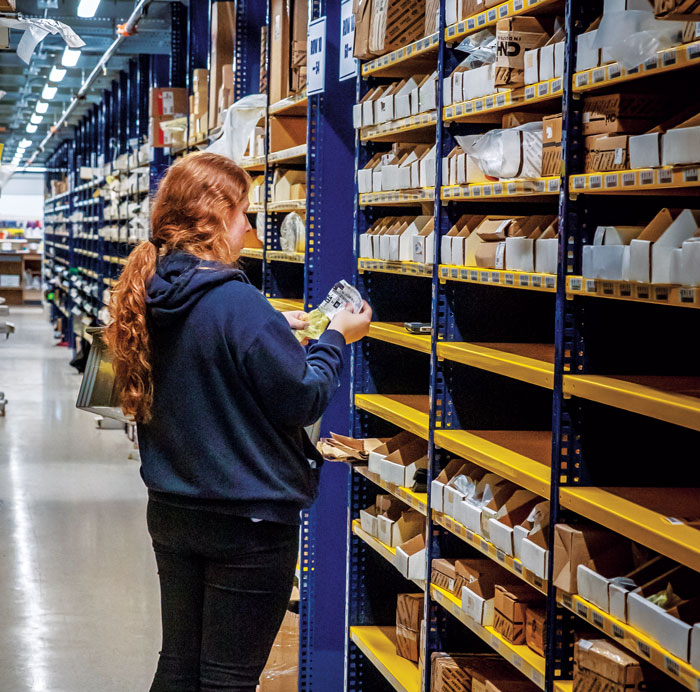 The warehouse at Messick Farm Equipment’s new facility has 4 times the pallet rack space as before. At just 6 feet wide, the aisles are narrower and go all the way to the 30-foot ceiling. Special forklifts are used to collect merchandise.

“Involving as much of your staff as possible in the decision-making process is very worthwhile,” Messick says. “The 3 years it took in planning were 3 years well spent. Don’t underestimate the amount of effort this takes in terms of time and planning on the front end, as well as moving and getting comfortable on the other end. It’s a lot more disruptive to your business than you might anticipate.”

Messick Farm Equipment has moved locations before for branch stores, which was not a big deal. With Mt. Joy serving as a hub for other locations and housing the administrative offices, moving the location was a massive undertaking.

“We also took a lot of advice from people who construct and plan warehouses, environmental planers, architects, those kinds of people,” he says.

“We used a lot of outside contractors. In the past, we might have been more guarded and thought we know the business better than anyone. Because of the scale of the project, it was worthwhile to bring in
outside expertise.”

Messick Farm Equipment’s customers have responded positively to the new headquarters and facility upgrades. Messick says that was evident at the open house hosted at the end of January.

“The amount of attendance and general support from the community was unbelievable,” he says. “We expected people to want to come out and see what we did, but the sheer number of people and their general attitude toward something like this was awesome.”

During customer tours of the new headquarters, Messick says customers responded positively to the investment put into the facility on
their behalf. 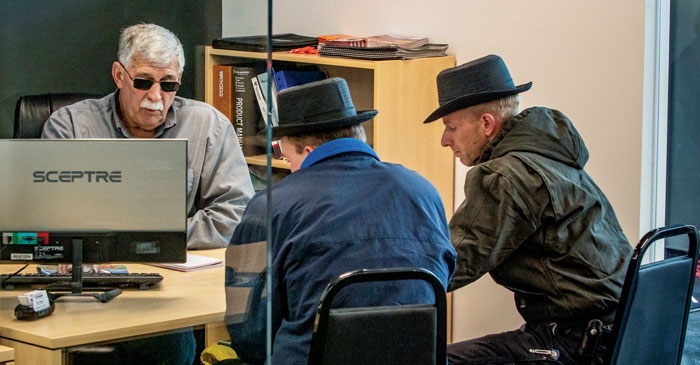 One aspect of the new facility design that was important was including offices that offered more privacy than the Elizabethtown, Pa., facility’s offices had.

“It was amazing to get that kind of feedback and buy-in from our customers,” he says.

“This impacts their bottom line in a way because there’s expenses that go along with it. But the response went way beyond our expectations.”

As staff are still getting settled in, high levels of efficiency have not yet been achieved, but Messick is confident the changes will be helpful in the long run, especially for hiring.

“When we bring people in for interviews, the goal is that we’re going to be the best place to work,” he says. “There’s nicer lunchrooms, training facilities, coffee stations all around the building. For our service technicians, there’s changing rooms, a shower, brighter facilities, those kinds of things. You need the best people to be the best dealership. In the modern hiring environment, investing in our facilities was a reflection of wanting to hire the best people.”