The No-Till Planter Race: Did IH Get There Before A-C?

International Harvester appears to have been the first to come to market with a no-till concept planter — 13 years before Allis-Chalmers’ model found commercial success in 1966. But IH exited production just 2 years later after only 23 shipments.

As our staff was delving into research for the “Timeline of No-Till History," the No-Till Museum we’ll be bringing to the National No-Tillage Conference in Louisville, and an all-new history series planned in 2022 to mark the “triple crown” of no-till milestones, we discovered some mystery over the first no-till planter. And it’s the kind of discovery that’s sure to fuel additional debates.

It’s been widely reported by Frank Lessiter since putting out the first issue of No-Till Farmer 50 years ago that Allis-Chalmers (A-C) holds the distinction of having produced the first commercially successful no-till planter in 1966, then branded as the No-Til planting system. That is fact.

What we discovered — from scouring farm message boards, combing through videos and old farm publication articles, and making inquiries with several ag equipment historians — is less widely known. That is, in the early 1950s, International Harvester (IH) manufactured, marketed and sold what some claim is the first no-till planter. That was a full 13 years before the first A-C system hit the market (see sidebar at bottom).

Now, all you A-C’ers out there, don’t worry about this discovery dethroning your orange implement from its proud distinction in no-till history. A-C’s No-Til planter remains, without doubt, as the first that was “commercially successful.”

An examination of AgTalk message boards and a video by Classic Tractor Fever TV (an excerpted video is available at www.no-tillfarmer.com/historyM21video) tipped us off to IH’s role in no-till planter history. In the Classic Tractor Video, Purdue Chief Ag Engineer Don Rhine and Mauri Williamson, Executive Secretary of the Purdue Ag Alumni Association, now both deceased, described the 1954 planter they discovered, restored and would eventually place in the Indiana State Fair’s Pioneer Village Museum.

Rhine stated that the IH unit, which was initially developed at Purdue by ag engineer R.R. Poyner, qualifies as the first commercially produced no-till planter ever built. Incidentally, Purdue researchers started working on the concept as early as 1944, one year after Edward Faulkner’s seminal book Plowman’s Folly was released, espousing the principles that we know as no-till today.

The first demonstrations of Poyner’s unit were held in the Spring of 1947, Rhine said, providing “a glimpse of the beginning of no-till.” Williamson recalled that Purdue agronomist George Scarseth, an early no-till proponent, used Poyner’s prototype to plant 40 acres of corn in 1951.

While there are differing stories of exactly when Poyner joined IH, there’s no question as to his significance to the unit making it to market. “He had developed a prototype for a planter designed to work in unbroken ground,” says Tom Clark, historian of what is now known as Navistar. His “once-over tiller-planter” received U.S. patent 2,577,363 (for “mulch-tiller-planter”).

SALES LIT, BUT THE SALES DIDN’T COME. Pictured are 1954 sales brochures of International Harvester’s McCormick M-21 Till Planter, provided by Bob Buxton of the International Harvester Collectors Club. IH shut down production in less than 2 years after selling only 23 units of the 50 original planters produced.

IH ran with Poyner’s idea, and eventually built the planters at its Richmond, Ind., facility from 1953-55. According to Rhine, IH built about 50 of the planters, yet sold only 23 before giving up. Besides the few given to land-grant universities, the remainder, Rhine guessed, ended up as scrap at the foundry.

Poyner’s original “once-over-tiller” concept may have seen some changes from prototype to production, with the result being more soil being moved.

“The 2-row unit planted seeds and added fertilizer, but in the process disturbed a lot of soil,” says Clark. “It was then sold as a ‘Till’ planter (branded as IH’s McCormick M-21 Till Planter to be exact), but ultimately failed due to the phosphate fertilizer used.”

“It worked the ground, put down the deep fertilizer and planted fine. But then it put on the phosphate and killed half the seed. That was the trouble with planters then,” said Williamson, echoing Clark’s assessment.

Additional information was found in a 1992 Farm Show article, titled “First No-Till Planter Was Ahead of Its Time.” The article reported that the planter was designed to fit a Farmall tractor, with cutting discs in the front, underneath the middle and with planting units on back.

Rhine said many of the principles used on that original planter were incorporated into modern no-till and ridge-till planters. He said the planter was used successfully by many researchers and that some farmers felt it might’ve caught on had weed control products been available at the time. (Glyphosate, or Roundup, wouldn’t be cleared for agricultural use for another 20 years.)

Another Clue, But Brand Name Unmentioned

Another clue to Purdue’s connection to an early 1950s no-till planter is found on p. 49 of Frank Lessiter’s book, From Maverick to Mainstream: A History of No-Till Farming. A short sidebar article titled, “Early-Day No-Till Rig Built in 1950s” is told from the perspective of the late Howard Doster of Purdue but did not mention the IH or McCormick brand. Below is that sidebar, as it appears in the book:

“In 1972, a college student brought his uncle’s old no-till planter to Purdue University ag economist Howard Doster. It was among 50 planters that had been manufactured in the 1950s based on a prototype created by Purdue agronomist George Scarseth.

“The two-row machine featured a huge flat knife-like blade to slice grass sod ahead of each planter unit. But since it was built before herbicides for no-till burndown and weed control such as paraquat and atrazine were introduced, it was never a successful no-till unit.”

In International Harvester Farm Equipment: Product History 1831-1985, authors Ralph Baumheckel and Kent Borghoff included a few paragraphs on the M-21 and the 4M-21 (adapted to the Farmall 400 tractor). The concept and objectives were right, they say, but the timing was wrong. “The high horsepower requirement per row and the lack of effective grass and broadleaf weed control kept the planter from becoming accepted commercially. However, decades later the same objectives would be achieved by different means.”

Rhine was incorrect the unit was the sole one in existence. Thanks to our friend Paul Wallem, a former IH executive, dealer and author of two IH books, we were put in touch with Bob Buxton, president of the IH Collectors Club. Buxton is aware of a few remaining M-21s, including one recently discovered in a South Dakota John Deere dealership. Of that South Dakota unit, Buxton says, “It’s in very good condition, is being restored and will be donated to the IH Collectors Trust and eventually placed in a museum.” He added that the 90-year-old donor, a former IH dealer, insisted that it be available for IH special events.

“As with several IH products, it was years ahead of its time,” Buxton says. “It was a one-pass operation that prepared the soil and put fertilizer and seed down in one pass. You were then ‘done till harvest.’

Visit www.no-tillfarmer.com/historyRosendahl to read a Guest Blog by John Rosendahl, a long-retired Allis-Chalmers service department employee, who recalls his personal memories in “Remembering the Early Days of No-Till Planters.”

“We’ve got to remember this was 1954. With no chemicals or cultivation, weed control was an issue and was its downfall.”

Buxton’s use of “done till harvest” raised the question about the unit’s name, which ended up being marketed as a “Till Planter.” He’s unsure of the exact origin of the Till Planter name but adds that “no-till” wouldn’t arrive in common vernacular until much later.

IH was not alone in attempting no-till but waving the white flag. Lessiter, who included a “Drills, Planters That Left the No-Till Scene” chapter and pictorial history in his history book, recalls others.

“Back in 1972-73, Case also came out with a no-till planter. They pulled it from the market because they found it didn’t do the necessary job with no-till. That was their only planter product into the no-till market at the time,” he says. “I always admired them for admitting their no-till planter didn’t work.”

The First Commercially Successful No-Till Planter by Allis-Chalmers, Named as Among the Worldwide Wonders of Ag

In 1966, Allis-Chalmers (A-C) developed and manufactured the first commercially available no-tillage planters. Instead of turning under 500-1,000 tons of topsoil per acre with moldboard plowing, the company’s engineers came up with several unique coulter designs and planter frames that turned no-till into a reality. 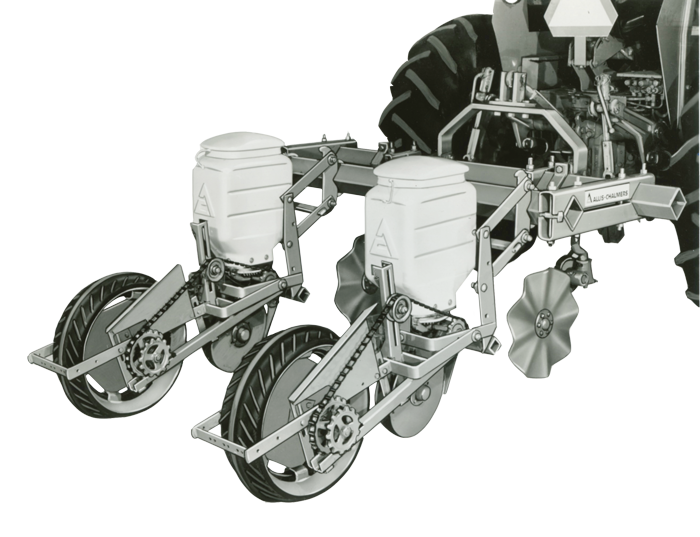 These planters, which would be trademarked as No-Til planting systems, were capable of no-tilling corn in 15- to 40-inch rows.

The difference-maker was the A-C No-Til Coulter. According to Allis-Chalmers Farm Equipment 1914-85, written by long-time company employee Norm Swinford, wheel track planting raised the curiosity of engineers. Specially, the practice of wheel track planting confirmed that only a small area of fine, firmed soil was needed for soil germination. Planter experts were soon asking themselves the question: “Why do we need to turn over 500-1,000 tons of soil per acre with a moldboard plow when we only need 8% of the ground for a seedbed?”

The question led to the development of the “A-C No-Til Coulter” by Maynard Walberg, an Allis-Chalmers implement engineer. It was a deep-fluted, 17-inch diameter coulter that would slice through crop residue or sod to prepare a 2½-inch seedbed ahead of the planter unit. A heavy rubber torsion-spring provided penetration in tough soils and protected the coulter when dealing with rocks or other obstructions.

The company offered three blades — which were produced by Ingersoll’s Chicago plant — for different soils and field conditions, but the most popular was the full 2½-inch fluted coulter.

To accommodate the coulters, A-C engineers designed planter frames with three toolbars for 20-40-inch rows. The first toolbar held the coulters, the second toolbar carried the fertilizer boxes/tanks plus openers, and planter units were attached to the third toolbar.

According to Tim Brannon, who joined A-C as a product rep fresh out of college in 1975 before becoming a dealer 3 years later (known today as B&G Equipment, Paris, Tenn.), A-C had a market share as high as 80% in no-till planters. He recalled that he sold 60-some no-till planters in the early years. “No two were alike. They were like erector-sets, so many different options for the specific conditions,” he says.

“A-C had a lot of firsts in innovation, but we were never as good at selling as we were at innovating, and I can say that as I was on the selling side. We were an innovative company that went all-in for technology, but sales didn’t catch up.” 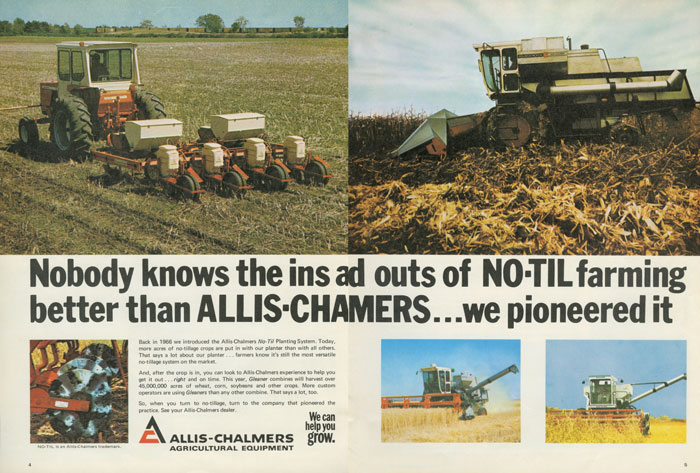 PLANTING A FLAG IN THE GROUND: This 2-page spread on Allis-Chalmers No-Til Planting System appeared in the premier edition of No-Till Farmer in 1972. The ad copy reads: “Back in 1966 we introduced the Allis-Chalmers No-Til Planting System. Today, more acres of no-tillage are put in with our planter than with all others. That says a lot about our planter — farmers know it’s still the most versatile no-tillage system on the market.”

For More Information, check out "What Ever Happened to the Legendary Allis-Chalmers’ No-Till Planter?"