A recent Farm Equipment survey found a majority of farmers believe shortlines have the edge over majorlines in both equipment price and customization.

For the purposes of the survey, the following brands were considered majorlines: John Deere, Case IH, New Holland, AGCO and Kubota.

Farmers were asked to list the shortline brands represented on their farm in the following categories: seeding/planting, tillage, haying, spraying, mowing and harvesting. The tillage category received the most response, with 75% of growers listing an entry. Mowing and haying had the least entries, with 55.8% of farmers leaving a response for each category.

Which Majorline do you Most Identify Your Farm Operation with? 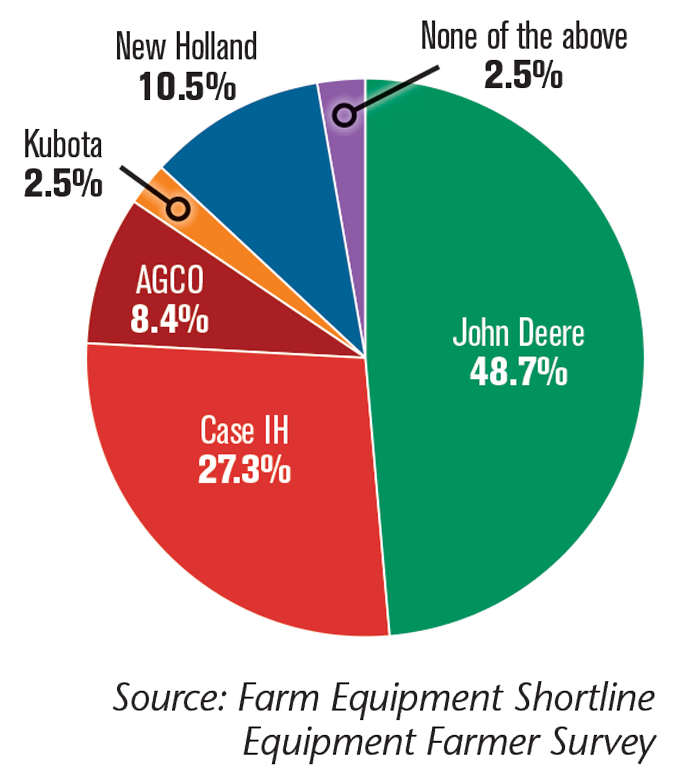 Seed/Planting Equipment. Kinze was the most mentioned shortline in the seeding/planting category, being mentioned in almost 39% of the submitted comments. Great Plains followed at around 15%. Landoll and Horsch were two other brands with notable mention, receiving mention in around 5% and 4% of submitted comments, respectively. Precision Planting, which was considered a shortline for the purpose of this survey, also received mention in around 4% of submitted comments. Other brands mentioned by less than 4% of surveyed farmers included Crustbuster, Monosem, Remlinger and Weaving. 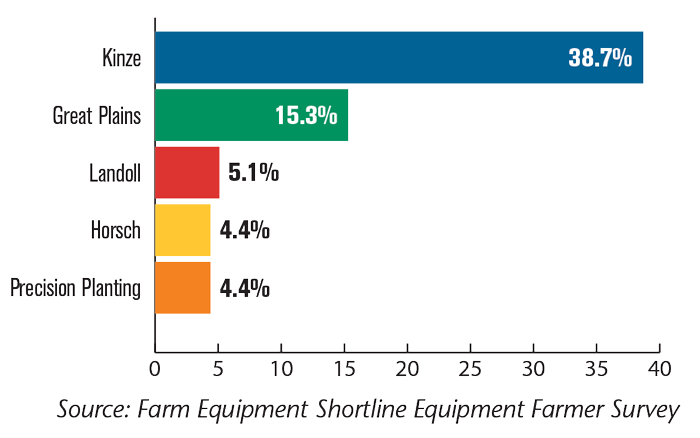 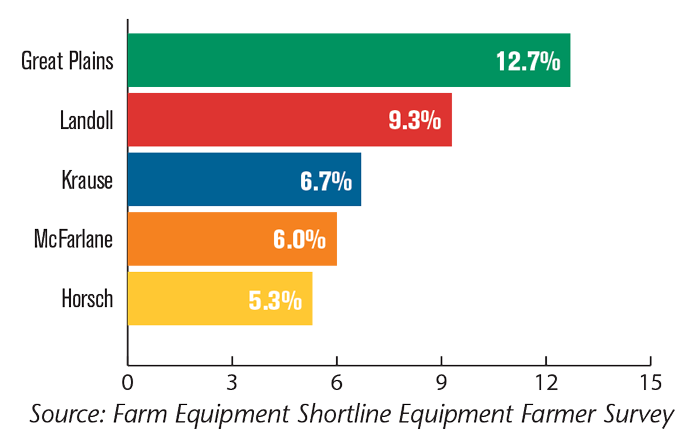 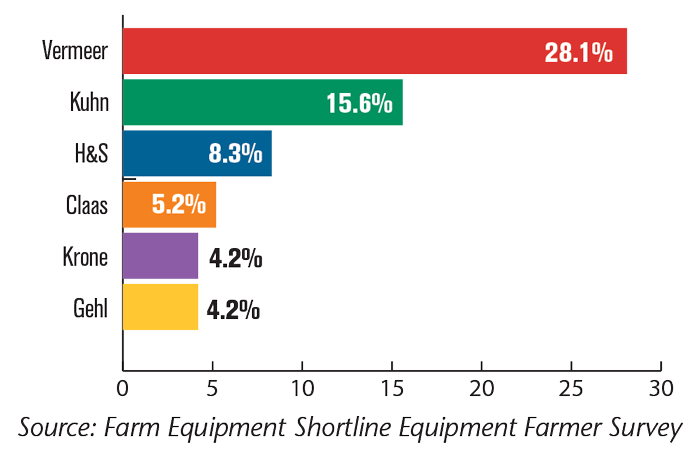 Spraying Equipment. Hagie tied for first with 8.7% of farmers saying the brand had a presence in their spraying operations. Another 8.7% of farmers also mentioned using Demco spraying equipment on their farm. 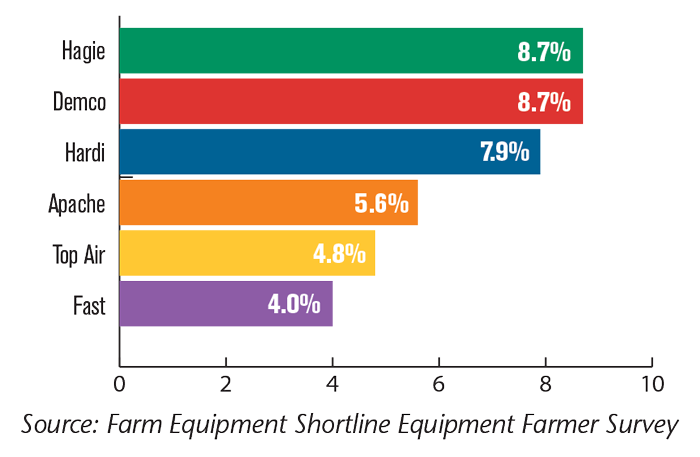 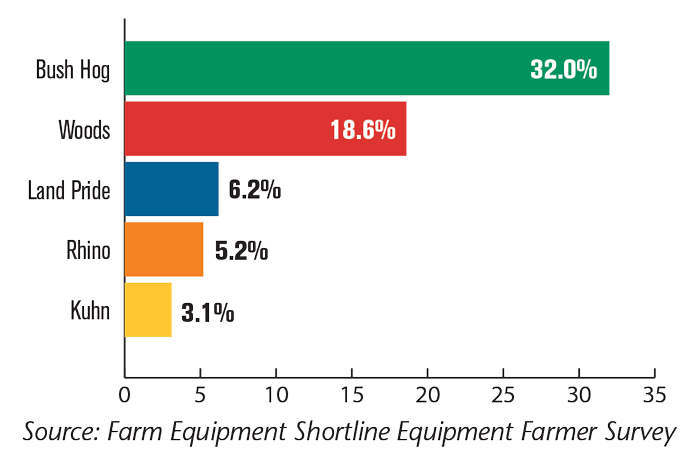 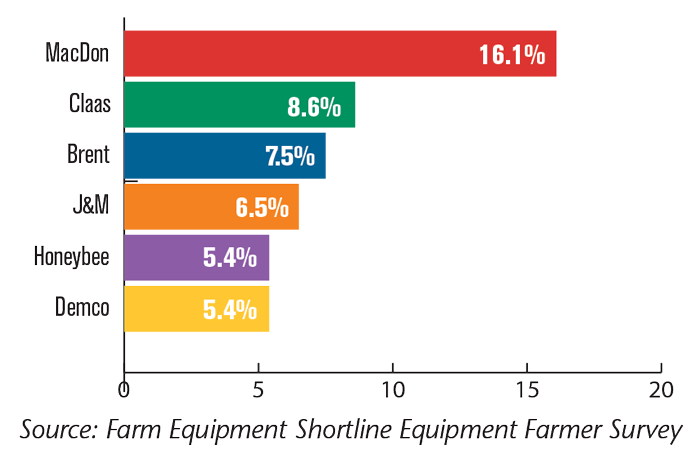 Which Brand of Shortline Equipment has Been Most Significant to Your Operation? 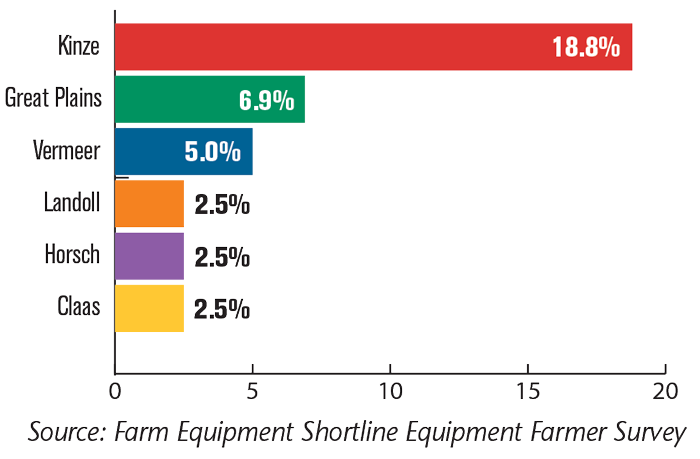 What Prompted You to Purchase that Particular Piece vs. What the Majorline OEMs Had to Offer 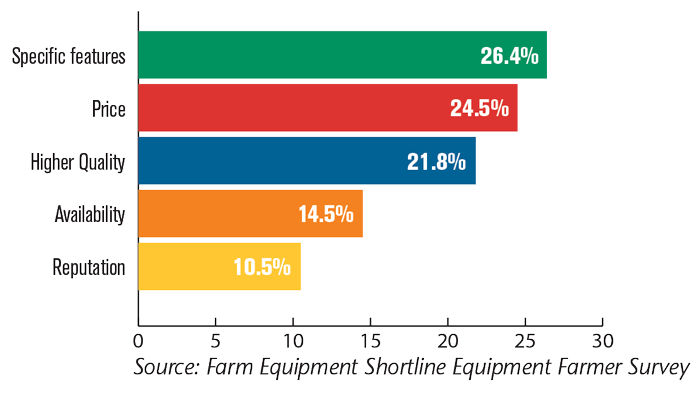 Growers were also asked to explain what prompted them to purchase the piece of equipment they listed as “most significant”. The most common answer, being mentioned in 26.4% of responses, was the equipment had specific features the farmer either needed or liked for their operation. Common examples given were

Another 24.5% of surveyed farmers indicated price was a factor in their decision to purchase their most significant piece of shortline equipment, with many simply listing “price” as the sole reason. One farmer specifically mentioned not picking their shortline equipment because of its brand, saying, “I bought it used because of the price, and it was nice enough for what I needed. Whether it was one of the big OEMs or a shortline had nothing to do with that purchase.”

Some 22% of surveyed growers said the shortline unit being higher quality than its competition was a deciding factor in the purchase, with many specifically naming the majorline manufacturer they compared it to.

Availability also played a large role in farmers’ decisions to purchase shortline equipment, with 14.5% of farmers mentioning it as a deciding factor. Several farmers mentioned purchasing a shortline machine because their local dealer did not have a majorline version of that equipment in stock. Others stated that their majorline simply didn’t manufacturer the machine they needed or didn’t offer it in the specific size or configuration they were looking for.

Reputation and recommendations were a deciding factor for 10.5% of surveyed farmers, many mentioning either trying their neighbor’s machine before buying their own or simply hearing from others that it was a high quality machine. One dealer specifically mentioned that the machine was recommended by a local university tillage specialist.

Other reasons farmers gave for buying their most significant piece of shortline equipment included having better service than majorline counterparts, more reliable parts availability, a good relationship with a sales rep and doing extensive research on the machine.

Have You Purchased Shortline Equipment from a Dealership Other Than Your Primary Dealer for Tractors & Combines? 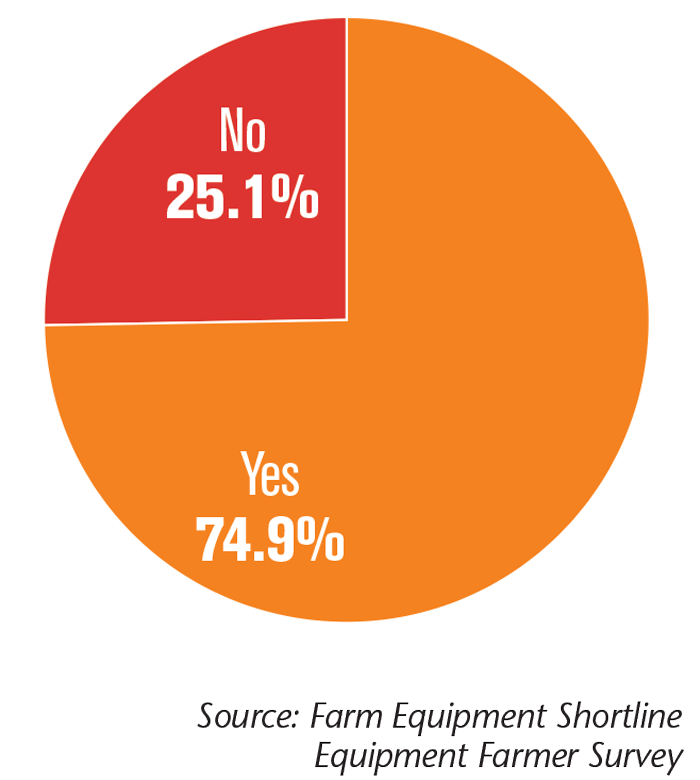 Which Manufacturers Do You Regard as Having the Edge in the Following Categories? 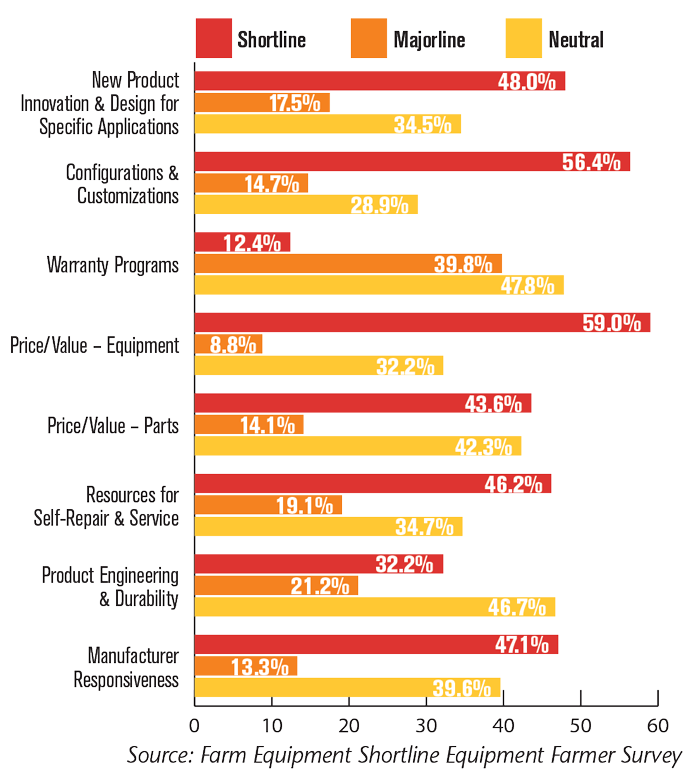 Shortline manufacturers received a majority vote from farmers in configurations & customizations and price of equipment at 56.4% and 59% respectively. The most neutral categories were warranty programs and product engineering and durability, each receiving 47.8% and 46.7% neutral votes respectively. Parts value also received 42.3% neutral votes.

Overall, farmers seemed most confident in shortline manufacturers when it comes to new product innovation, customization, the price of the equipment and parts, resources for self-repair and the company’s responsiveness.

When You Inquire About a Specific Shortline Product not Handled by Your Primary Dealer, What is the Most Common Response? 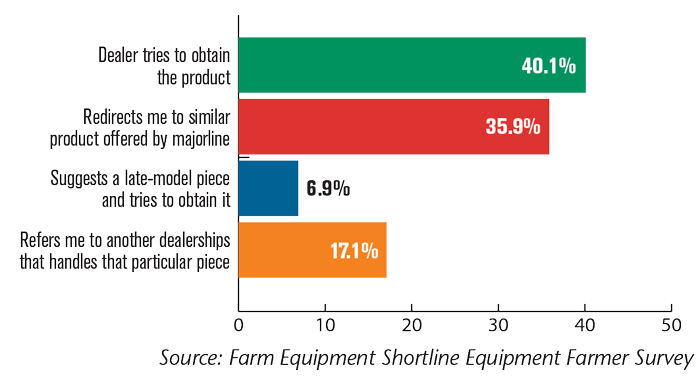 Dealers were most likely to try to gain shortline equipment for their customers when they don’t have it, according to surveyed farmers. Some 40% of farmers indicated this was the most common response when looking for a specific piece of shortline equipment vs. 17.1% who said their primary dealer refers them to another dealership that has the particular piece. Some 35.9% of farmers said their dealer steers them to a similar machine from their majorline and nearly 7% said their dealer tries to obtain them a suggested late-model machine.

Has Visiting Another Dealer (Besides Your Primary Dealer) for Shortline Products Resulted in You Purchasing Equipment? 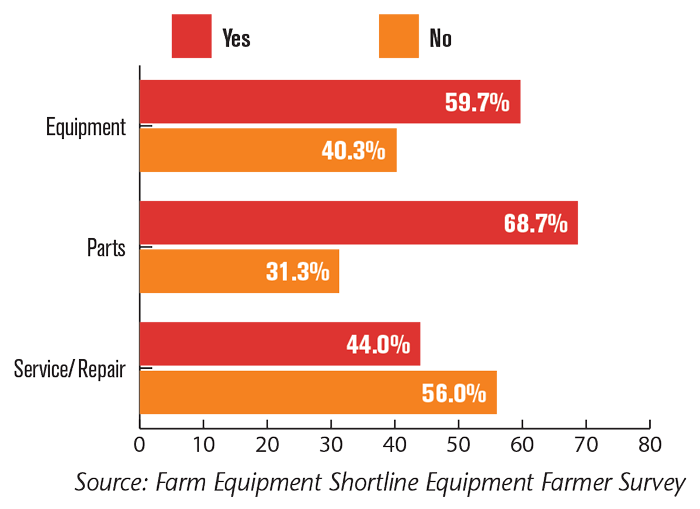 When asked about whether or not visiting another dealer for shortline products had resulted in a purchase, farmers indicated they were most likely to buy shortline parts than equipment or service.

When asked to elaborate further, many farmers mentioned shopping around for better prices on equipment and parts, with one farmer stating, “Parts from OEMs seem to cost 33% more over shortline manufacturers. Plus shortlines seem to put more thought into manufacturing parts, so we’re getting more bang for the buck.” Another farmer mentioned sourcing their own parts, saying, “I source my parts and look for price and quality. My time is worth something. I‘ve noticed some dealerships supplying poor quality and charging more. I don’t appreciate price gouging.”

Other reasons mentioned by farmers were their primary dealer not providing parts or service for their shortline equipment, disliking working with larger dealerships that are near them or simply not being particularly loyal to a “primary dealer.”

If Consolidation/Brand-Purity Efforts at Majorline Dealerships Continues at its Current Pace, How Will You Most Likely be Impacted? 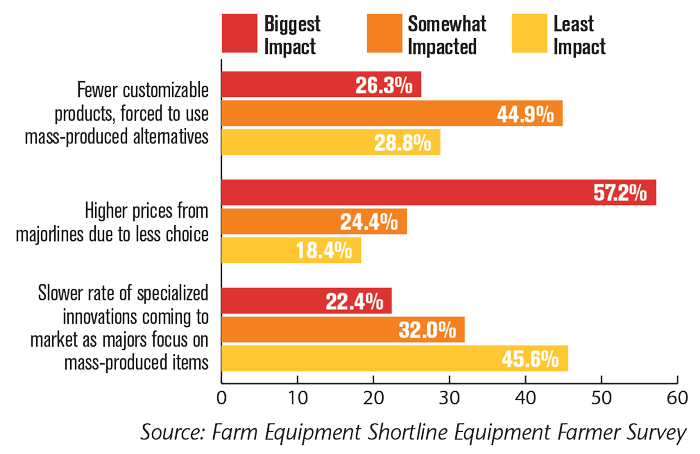 Brand-purity at dealerships (forcing shortlines out of majorline dealerships) has been an ongoing trend in the ag equipment industry for some time. When asked about the issue, farmers were most concerned about higher prices due to a growing lack of choice in equipment purchases, 57.2% of farmers believing this would have the biggest impact. 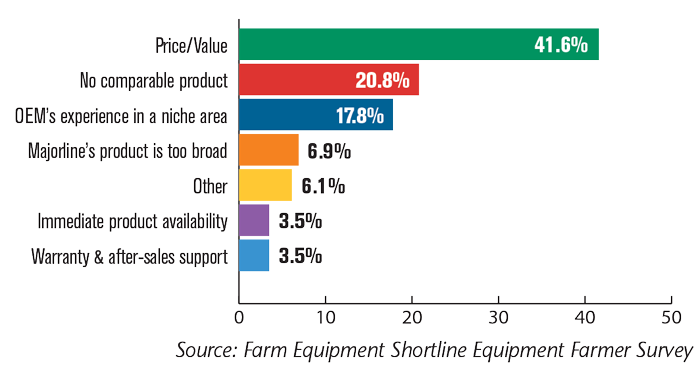 When asked what their primary reason would be for purchasing a shortline product over a majorline’s product, price/value was the top runner with 41.6% of farmer’s indicating that as their primary reason. A lack of comparable product from the majorline came in second at 20.8%, while the shortline manufacturer’s experience in a niche area was the third most selected option with 17.8% of responses. Almost 7% of farmers said their majorline’s product was too broad compared to the shortline options available. Immediate product availability and warranty/after-sales support each received mention from only 3.5% of surveyed farmers.

Among responses collect in the “other” category, farmers listed poor customer support from majorlines, avoiding brand-new tech they cannot repair themselves and the shortline machine’s performance against the majorline’s version.

Do You Agree that Independent Manufacturers are the Driving Force for Technological Advancement in Their Respective Product Segments? 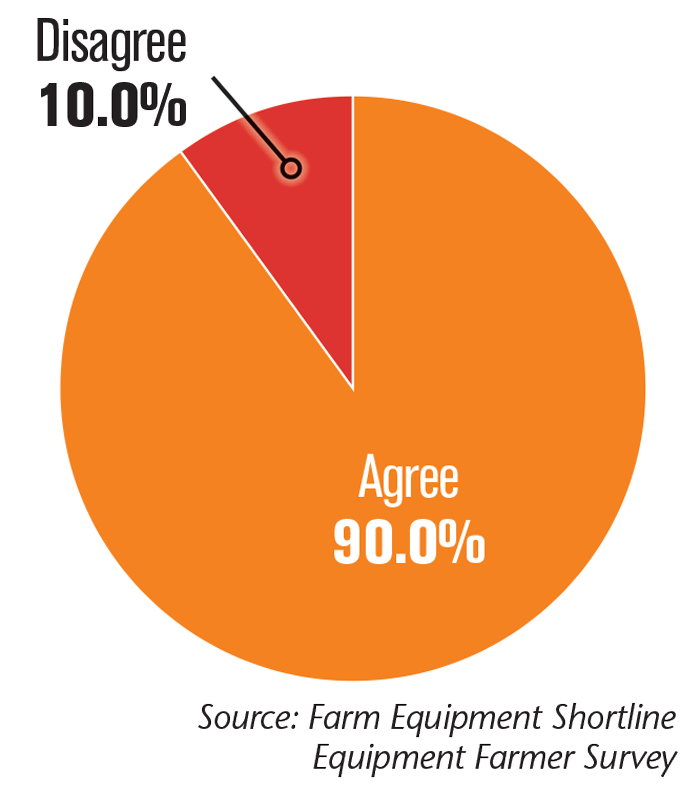 Which of the Following Best Describes Your Farm’s Pattern of Embracing New Farm Equipment? 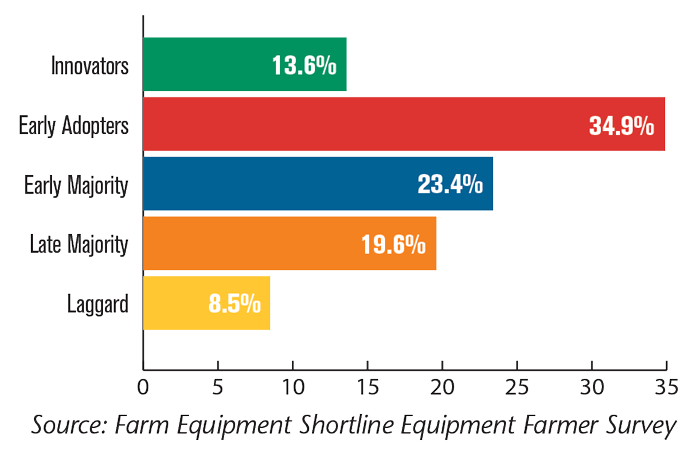