According to Farm Equipment’s second annual survey to farmers about their shortline manufacturers, farmers continue to buy shortline equipment due to the quality they get for the price and the major lines’ lack of experience in niche areas. Farmers also indicated they see shortlines as having better self-repair options for their customers and take the edge in responsiveness.

For the purposes of the survey, the following brands were considered major lines: John Deere, Case IH, New Holland, AGCO (Fendt, Massey Ferguson, Challenger) and Kubota. For more demographics, see "Who are This Year’s Surveyed Farmers?" below.

For the second year in a row, Kinze was the most common shortline planter brand for farmers to own, with 38.7% owning Kinze planters, the same percentage as last year. Kuhn Krause was the top tillage shortline brand with 15% of farmers saying the brand is used on their farm vs. the 13% that made Great Plains last year’s top tillage brand. It should be noted that while Great Plains was included as a shortline brand in this year’s study, it is owned by Kubota. 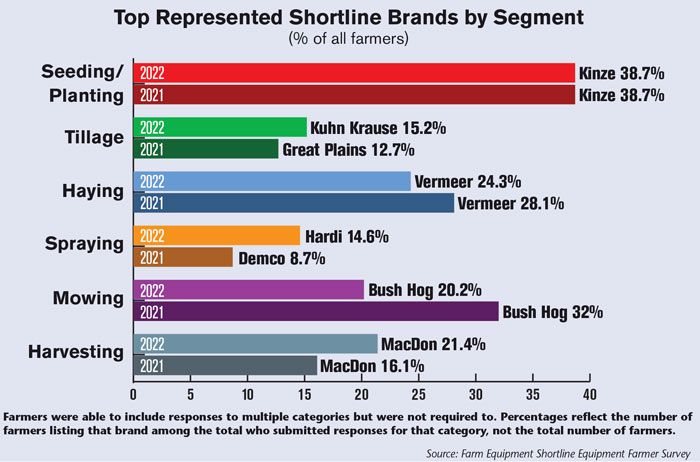 When asked what shortline brand had been most significant to their farming operation, Kinze was once again the most selected shortline at 15.4%, down from 18.8% last year. Great Plains was once again the second-most mentioned brand at 4.3%, also down from 6.9% in the 2021 survey. MacDon was the third-most owned shortline, being mentioned by 3.9% of all the farmers that took this year’s survey. Landoll and Vermeer finished the top 5 most-mentioned brands, each being owned by 3.1% of all surveyed farmers. Farmers mentioned 59 different shortline brands across all responses. 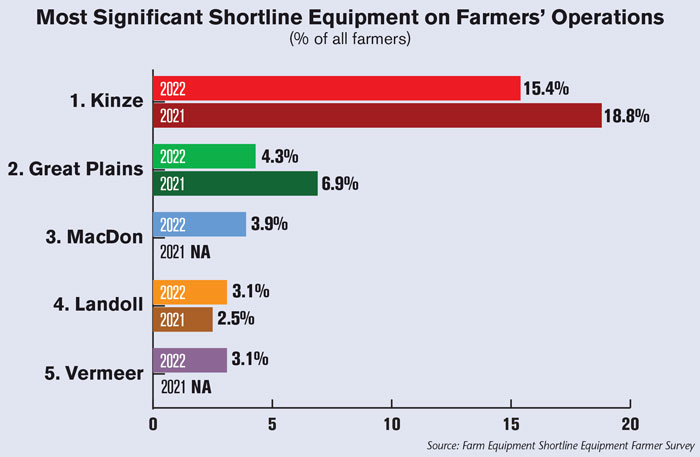 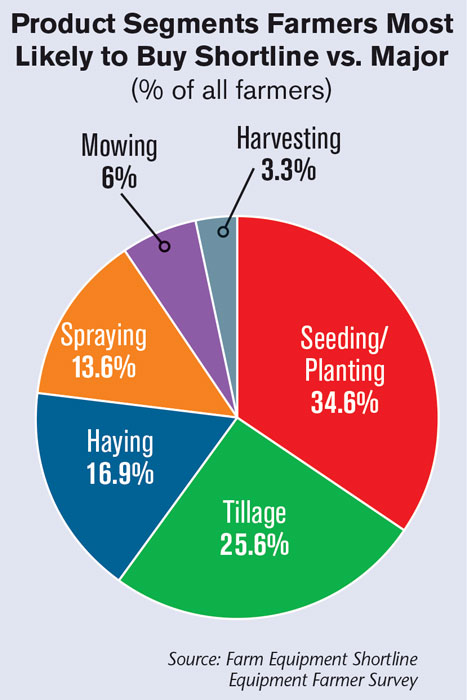 Farmers were asked to provide their specific reasons for purchasing the shortline machine they wrote in for their most significant shortline piece of equipment, with 25.6% mentioning the specific features of the machine. This was down slightly from 26.4% saying the same last year. Some 24.2% of farmers mentioned the price or value of the machine in their response, also down from 24.5% last year. Another 22.1% were driven by the quality of the machine vs. 21.8% in 2021.

Availability of the shortline machine was a more common answer in the 2022 survey than last year, with 18.9% giving it as a reason for the purchase, up from 14.5% last year. The percentage of farmers driven by the reputation of the shortline brand was only 3.9% this year, a notable fall from 10.5% last year. 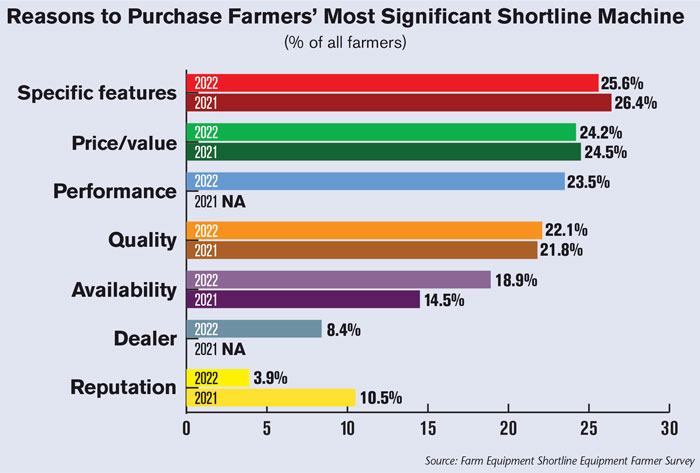 The most common reason farmers gave for why they would choose a shortline over a major line was price/value at 41.3%, roughly the same as last year. Not being able to find a comparable product from the majors was once again the second-most common reason with 23.8% of farmers choosing it, up from 20.8% last year. A little over 15% of farmers focused on a shortline manufacturer’s experience in a niche field as a reason to buy from them, a decline from 17.8% last year.

The majors’ products not being specialized enough was a slightly more common reason this year, with 8.9% of farmers picking it vs. 6.9% last year.

In this year’s “other” category, farmers mentioned having a hard time getting service from the majors, proximity to the shortline’s dealer and warranty. 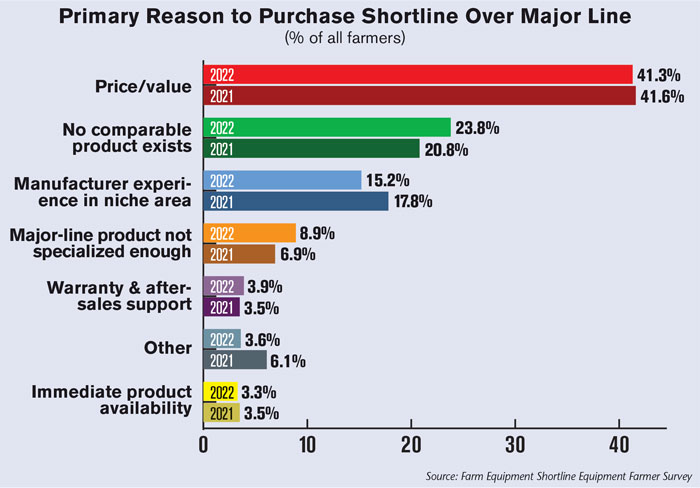 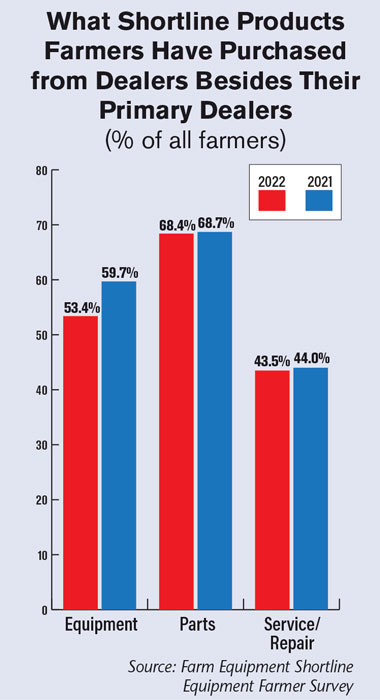 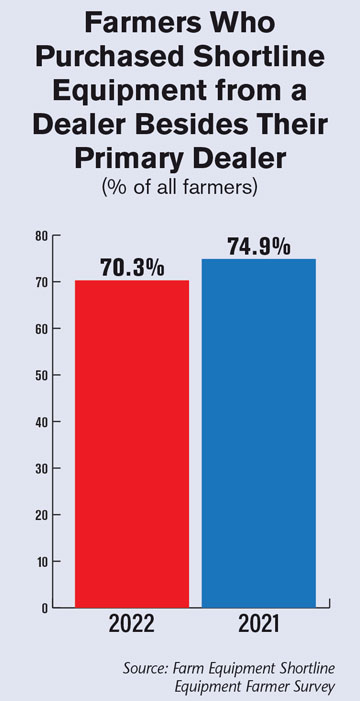 Farmers this year once again said that, when asking their dealer about a shortline product it doesn’t carry, the dealer most commonly tries to get it for them (34.3% of farmers said this). This was down, however, from 40.1% last year. Another 33.3% said their dealer directs them to a similar product their major offers, down slightly from 35.9% in 2021.

Among the 13.1% who selected the “other” category, responses included farmers not asking their dealer for products they don’t carry, looking for the machine themselves, finding another dealer and being offered no help from their primary dealer. 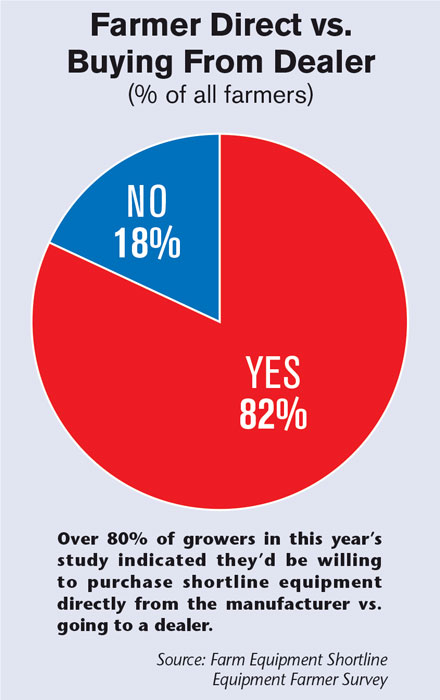 Topics where farmers were the most neutral one shortlines vs. majors were warranty programs (53.8% neutral), price of parts (45.8%) and product engineering (41.8%). 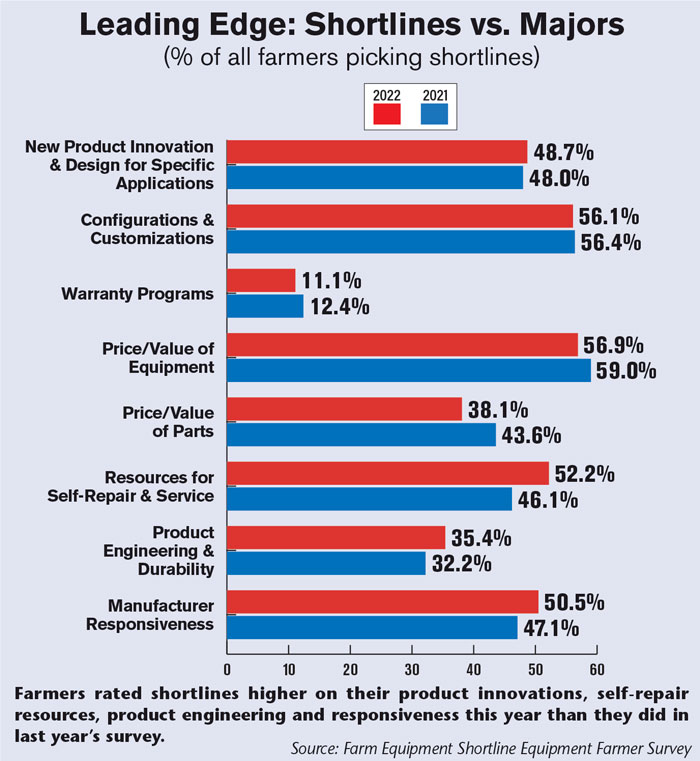 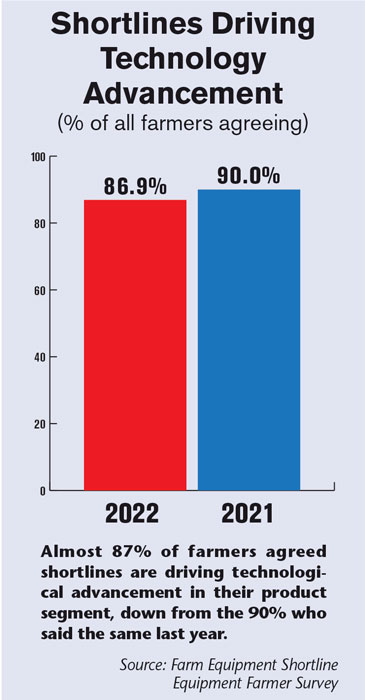 Rising prices were considered the biggest potential impact on farmers as a result of brand purity at major-line dealerships, with 58.9% picking that option. Having fewer customizable products followed with 29.1% of farmers considering it to be heavily impacted by brand purity effort, followed by a slower rate of specialized innovations at 21.7%. 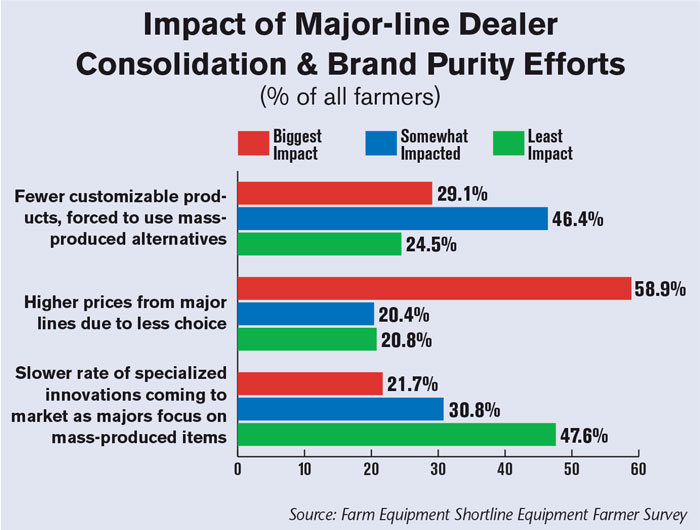 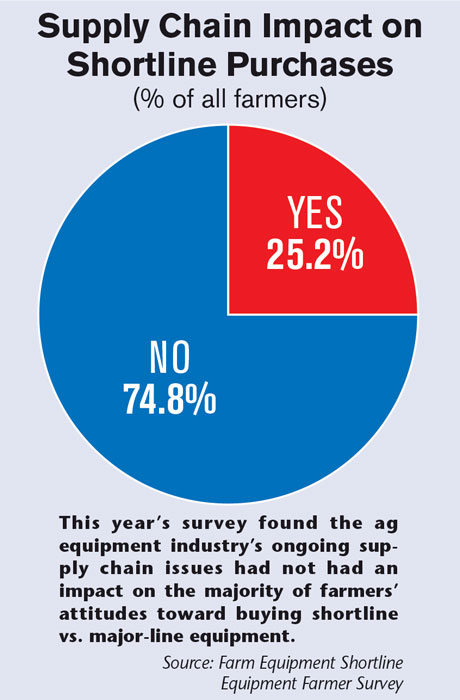 Who are This Year’s Surveyed Farmers?

This year’s Farm Equipment 2022 shortline equipment farmer survey asked additional identifying information of its participants. The majority of respondents were over 55 years old, farmed less than 1,000 acres and grow corn and soybeans. 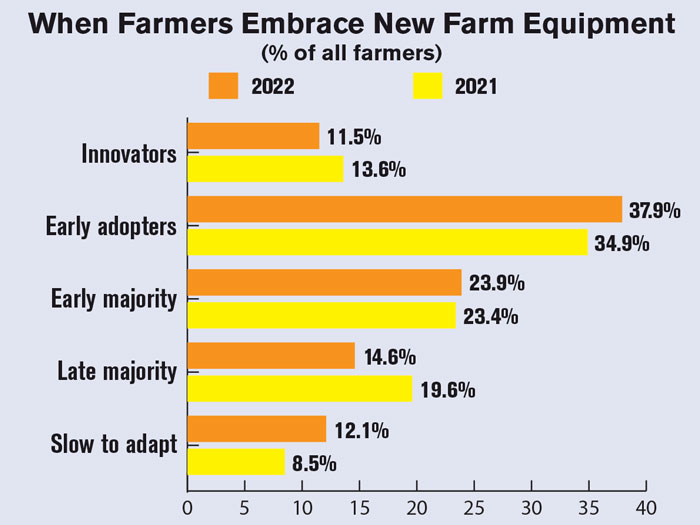 Almost 38% of farmers in this year’s survey considered themselves early adopters of new farm equipment, up from 34.9% last year. The percentage who consider themselves innovators declined, however, from 13.6% to 11.5%. The percentage self-identifying as part of the early majority when it comes to new equipment stayed mostly unchanged at 23.9%. 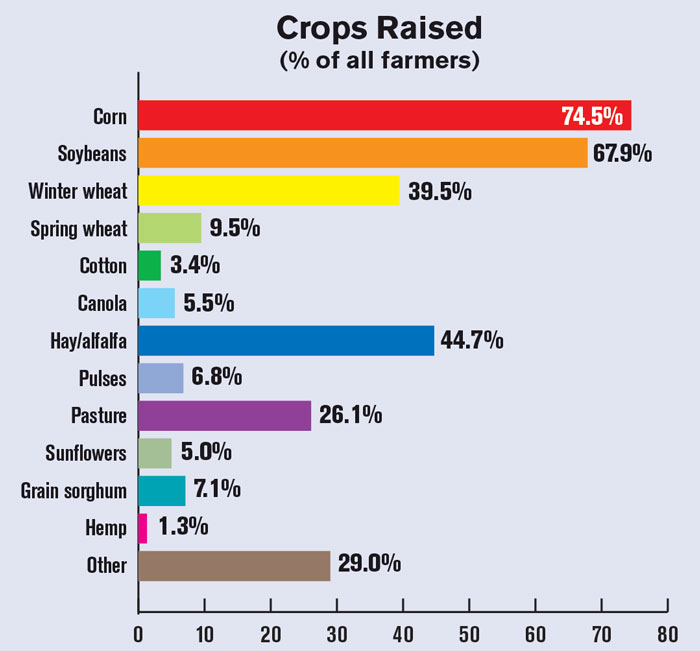 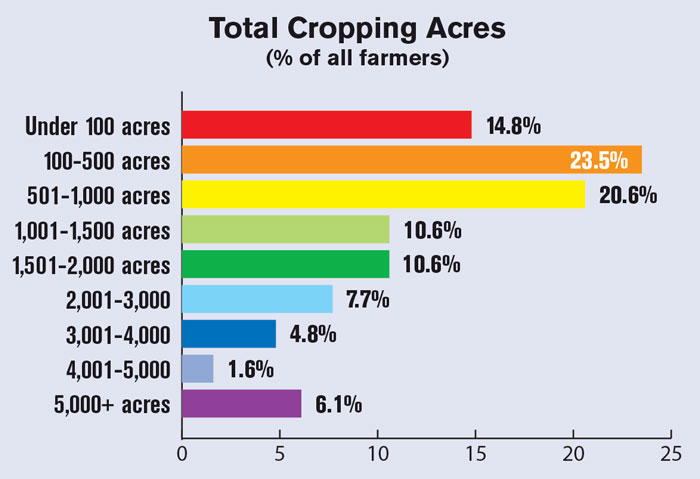 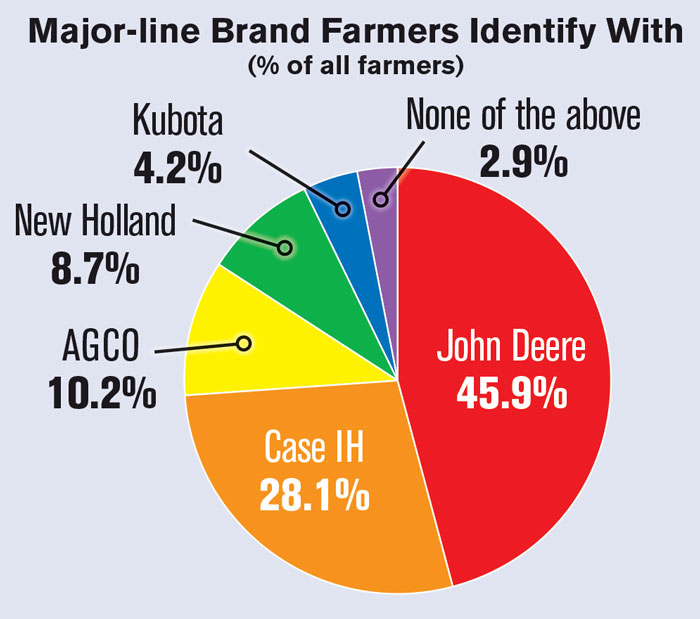 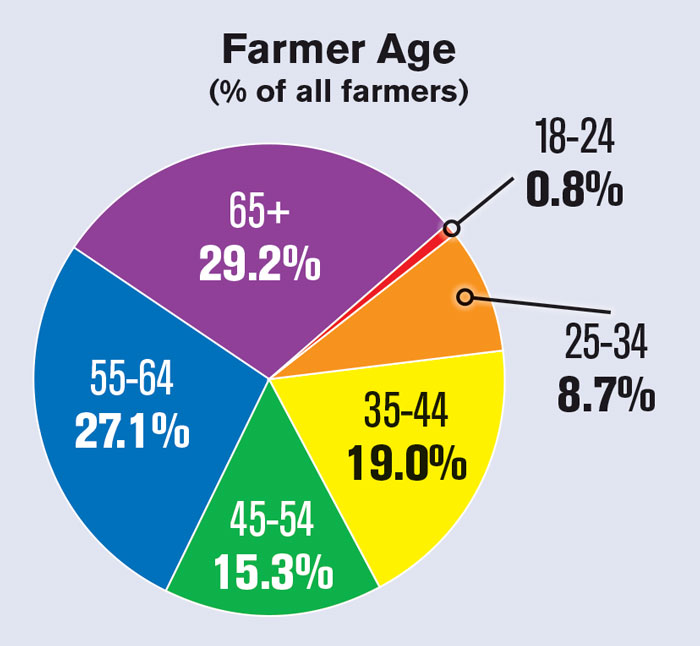 Over half of surveyed farmers this year were 55 or older, with over 29% being over 65 years of age. Almost 10% of this year’s farmers were under 35 years old, with just under 1% being under 25 years of age.

A Look Back at Some of Ag’s Top Shortline Innovations

A Case for Shortline Equipment