With schools and restaurants closed across North America due to the coronavirus, the demand for milk and cheese has dropped. With nowhere for their product to go, many dairies have been forced to dump their milk. Dairy farmers make up a significant portion of Messick’s customer base. Seeing their customers struggle, staff at the 5-location dealership wondered if there was anything they could do.

“We were sitting around in the morning just talking before business really started up. We were talking through, ‘Oh, why, why is this happening?’ Everybody's sitting around the office talking about dairy supply chain issues. We know all the schools are closed and we were rationalizing why this is an unsolvable problem,” says Neil Messick.

Messick says one of the secretaries suggested calling processors and seeing if they could buy some of the milk.

“We kicked the idea down the road for a day or two, but then we kept hearing about it. In my area, my wife tried to go to the grocery store and all she could buy was half gallons because all the gallons were gone,” says Messick.

He got back to thinking about the idea but thought, “There’s no way I can just pick up the phone and go and buy milk” from the processor. That thought process stopped Messick from doing anything for a while, but then one day someone gave him the phone number for a guy at the local processing facility.

“I called and it literally took 3 minutes and then another 3 minutes in a follow up email and on April 9, a truck of 500 gallons is coming here. I just couldn’t believe that it was that easy,” he says.

Every Messick’s employee is going to get 2 gallons of milk from the delivery. Messick says they’ll send a truck out that will run a route to all 5 of the dealership’s stores. The milk that doesn’t get distributed among the staff will go to two local food banks the dealership works with in town. 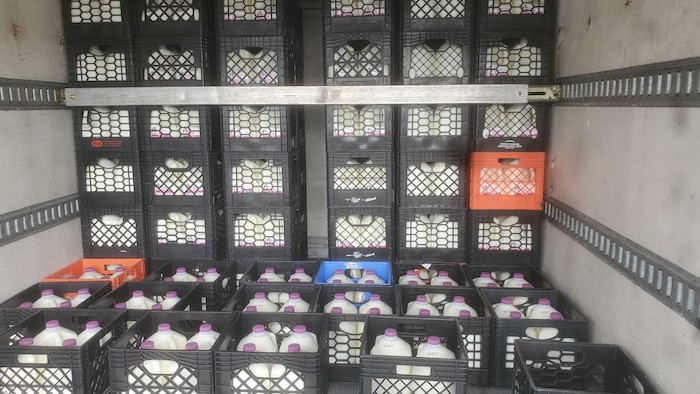 “The foodbanks have needs for all this stuff right now too. The demands on their services are much higher, so they are very happy to be able to take it,” he says.

Just 6 hours after arranging for the milk purchase, Messick learned that one of the dairy farmers who he goes to church with needed to dump 30 tons of milks. “How can we be so bad at connecting the dots on this? It became almost angering, frankly,”  he says.

While Messick says he’ll consider making another milk purchase, he adds that their group can only drink so much milk. However, he has this challenge to the rest of the industry:

“I challenge the manufacturers and the other dealers to do something like this. We profit off these guys in the good times. Why aren’t we there for them in the bad times?”