By Mike Wiles posted on April 1, 2019 | Posted in Manufacturer News

Doug Bruce shares how Osmundson evolved over the past 116 years to become a key supplier of blades & coulters for agriculture’s OEMs.

Osmundson Manufacturing Co. has carved a global niche in the equipment business by forming ground-engaging tillage parts from raw steel in its Perry, Iowa, facility. While the Osmundson name isn’t as well-known as John Deere, Great Plains, Landoll or Kinze, it’s not uncommon for their products to be in the booths of all those companies (and more) at the major farm shows.

The company has evolved over its history to manufacture components for the original equipment manufacturers as well as high quality replacement parts. It is content to let the OEMs develop large machinery while it supplies the high strength parts needed to allow the machinery to cover more ground at increasingly higher speeds.

The 100-employee company was founded by an inventor and manufacturer from Norway, Osmund Stolla, who, along with a cousin and brother, boarded the family’s sailboat and crossed the North Atlantic to New York around the turn of the 20th century.

After selling the boat, he came to Iowa and attempted to get a manufacturing contract with John Deere. When that didn’t happen, he opened the Perry factory in 1903, making tiling spades to install drain tile. One of those spades resides in the Smithsonian Institute, an example of one of the most innovative tools of the time.

When World War II broke out, the elder Stolla relocated to Minneapolis and opened a factory that manufactured food industry products. His son, William Howard Stolla, assumed ownership of the agricultural operation and started the forging and heat treating operation to offer replacement parts to farm and home stores.

Later, Donald Bruce entered the picture, marrying Stolla’s daughter and the couple together ran the Perry factory. Bruce, who was a born salesman, was not passionate about the manufacturing process, but his son Doug, exhibited a fascination for the factory environment.

Farm Equipment sat down with fourth generation owner Doug Bruce, to discuss the difficulties of surviving the 1980s, the nature of their unique manufacturing process, and developing and supplying OEM components.

Great Timing to Take Over a Business

“I was always a factory guy; it wasn’t something that I evolved into,” Doug Bruce admits. “When I went to college that was the direction I took. I got a master’s degree and took enough accounting that I could have sat for the CPA, but I didn’t want to push numbers all day. If you’re going to be in industry, you need to understand everybody’s job, and that was my goal, so I could at least talk to them intelligently. What I really enjoy is manufacturing and design. I’m at home there; I love the guys and hanging out in the shop.” 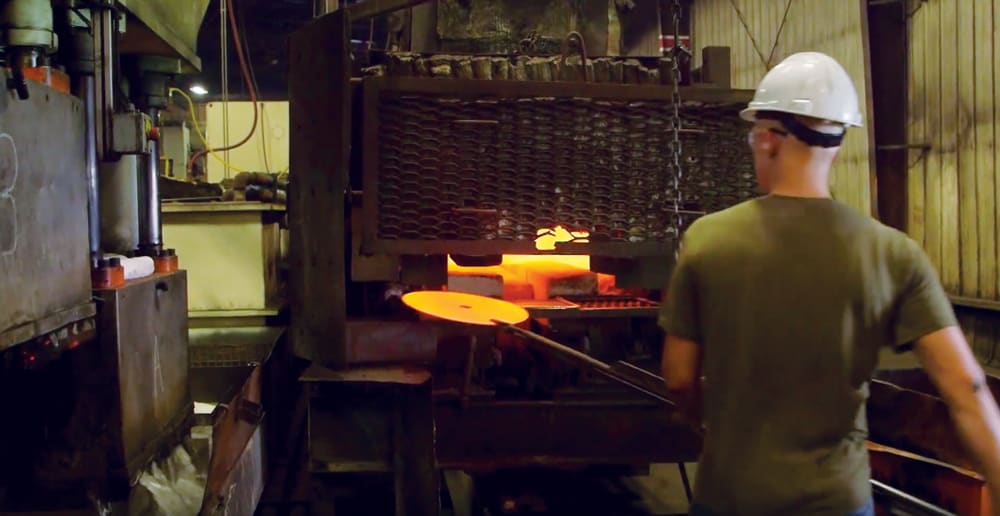 Osmundson has 5 major hot work lines and the center furnace will do about 9,000-10,000 pounds an hour of heating steel. “We form it, quench it, then it goes through a wash and temper area,” explains owner Doug Bruce. “We have presses on the hot work end, whether it’s pre-working metal before we heat treat it or after we get it hot, shaping, bending and those type of things. From there it goes through the hoist line, is checked and painted, packed and re-inspected.”

Bruce would need that education as he bought his parents out in the early 1980s, just before the bottom fell out of the agricultural market. Commodity prices were low, interest rates high, and farmers and manufacturers were going away in mass numbers. “My folks retired and I had a tough nut to crack, but I had a great bunch of people,” Bruce reflects. “Jim Tibbles, now president of Osmundson, was a great finance guy in analyzing how we could get back on our feet and start selling.

“Jim came to us from of one of the big national public accounting firms,” Bruce continues. “He always kept actual numbers on where we were. This gives a bank confidence that you know the situation you’re in, that you’re not just saying it’s going to get better. We said ‘this is our plan; we’re going to stick to it. We don’t think farmers are going to buy any less and we’re at the lowest ebb of purchases and equipment refurbishing; it’s only going to get better.’”

Bruce remembers how operating capital was hard to obtain in the early ’80s. “The bank we were with at that point did not want to finance agricultural companies; they called our line, so we moved to another bank in Des Moines. They agreed to take a chance on an ag company, but after a year the vice president who worked with us received an edict from the board and the business relationship was over. He did suggest we try a ‘risk bank’ headquartered in Minneapolis, so we went there. The funny part about it was they were charging just as much as the Iowa banks, so we were already paying a high risk amount and they just didn’t say it.”

Bruce says the Minneapolis bank was willing to offer creative financing. “They loaned money on our finished goods and raw steel at a ratio. ‘Work in process,’ or incomplete manufactured products, are worth nothing because the bank can’t finish it, but we worked that out. We were with them for about 8 years until we were borrowing at the lowest rate they had and they said ‘you need to go to another bank.’ So, they basically kicked us out and referred us to a bank with lower rates. That’s our evolution; we had good partners with all these banks.

“We were never well capitalized,” Bruce remembers, “but I wasn’t smart enough to quit. At one point we didn’t buy a pound of steel for 9 months — we had that much inventory. We didn’t have many employees, but we maintained cashflow, sold some things and figured out a way to glean a profit and work out of debt. Everybody pulled together and we still have quite a few of those guys working. The 20-year guys are common in our company; we have a lot of 30 and 40-year guys.”

Coming out of the farm crisis, a decision by one of Osmundson’s main competitors and the leader in supplying parts to manufacturers, forever altered Osmundson’s business model. Bruce explains, “They elected not to modernize their U.S. operation. They eventually closed in Chicago, so John Deere contacted us and said ‘Can you make these parts?’ Then the OEM business took off for us.”

Bruce coordinates his research and development process with the major manufacturers. “We design a new product, take it to them and say ‘we think we have a better horseshoe and it’s what you need to attack the soil with.’ They’re great at building the big piece of equipment; we try to watch their machines and take it to the next generation. We develop OEM products to handle more residue, improve speed, not throw dirt or with a longer wear cycle. They’re trying to develop manufacturing, ease of hook-up or pulling, and how it acts in the field. We go to their field trials and evaluate our different products; they decide what goes on their new equipment line.” 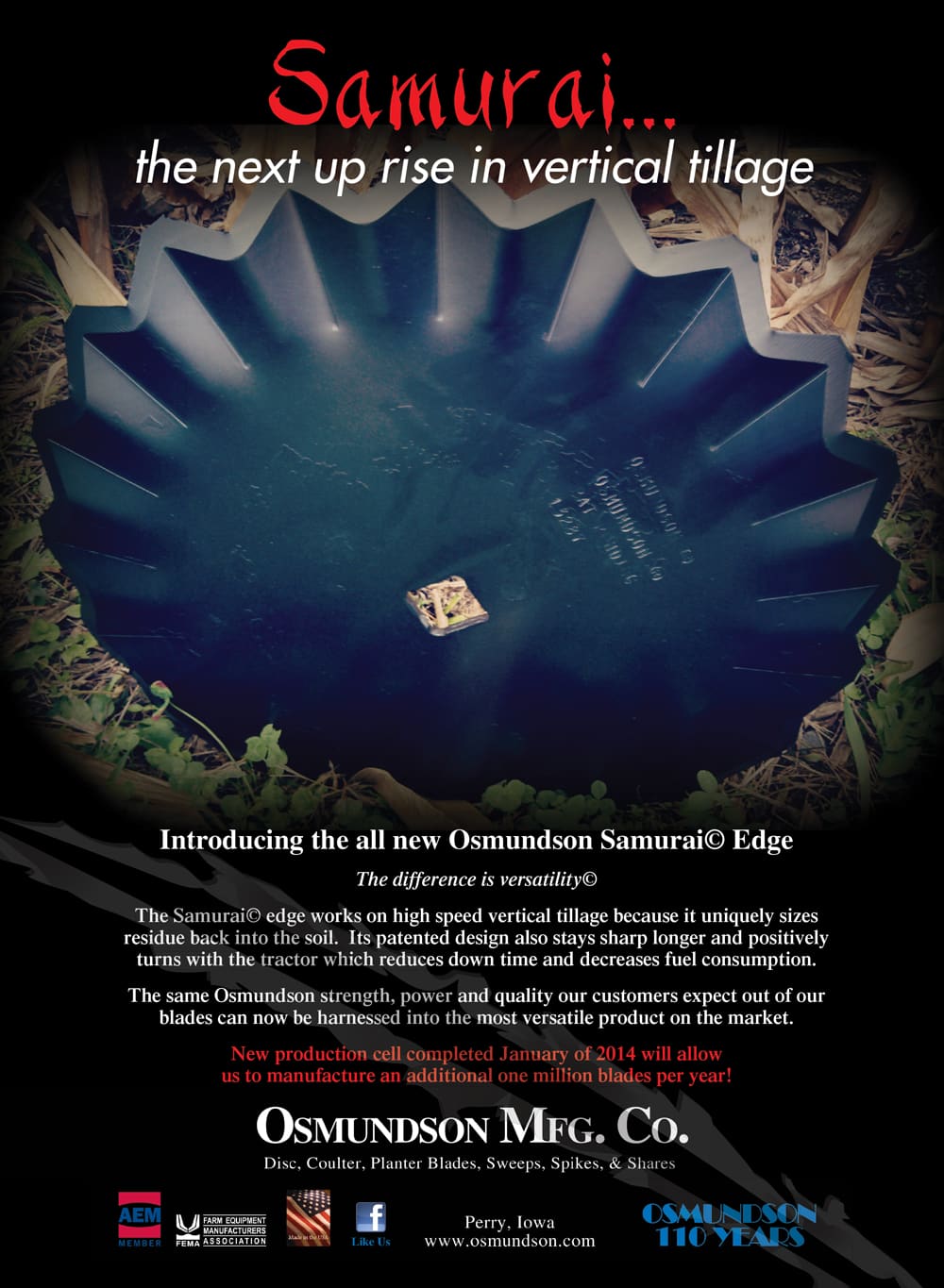 Bruce says the advent of vertical tillage and high speed applications impacted his business. “It’s helped. We have half a dozen patents that we use in different locations from North Dakota down to the sand in Georgia. Vertical till is critical and speed is what everybody’s after. If you can’t prepare the field and get it level fast, it’s going to be hard for you to plant that fast. Everybody would like to plant at 10 mph; you can cultivate at 10 mph. I have some guys testing our equipment that go 14 mph now and get a good finished field.” 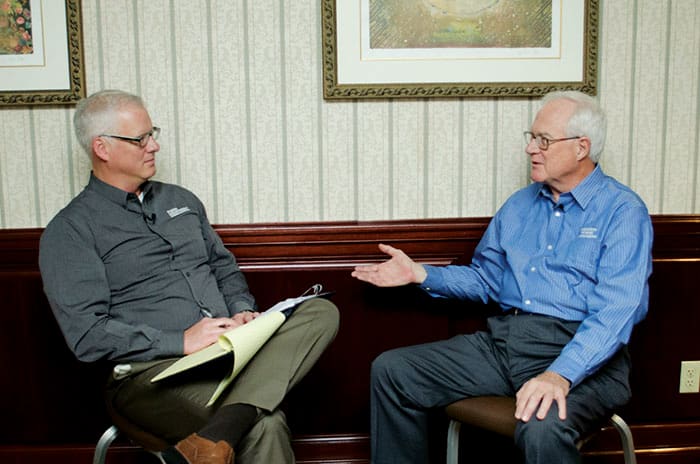 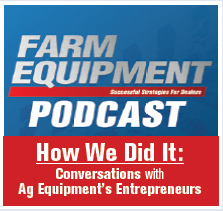 Listen to the story of Osmundson in Doug Bruce’s own words. Listen to the “How We Did It: Conversations with Ag Equipment’s Entrepreneurs” podcast.

Bruce says the timeframe between the R&D process and his product offered on new machines varies between OEMs. “The longest would be Deere; they usually average about 4 years. Some of the shortliners, it can be 2-3 years. I’ve seen the aggressive guys put them out in one season and, in the next season, it’s ‘let’s go,’ because it solved the problem. So, it can be as short as 18 months and as long as 5 years.

Looking Toward the Future

Bruce says the challenges have not only come from changing farming practices in North America. “We have 17 or 18 worldwide patents now and export to China, Southeast Asia, Australia, Russia and the Ukraine. We’re getting a footprint with their OEMs pushing innovation.

“We’re currently working on a contract in Japan with a newly, patented products for rice. Because rice is a very ropey and difficult crop, we have a product that we call a ‘Samurai’ and the Japanese were really thrilled about it. 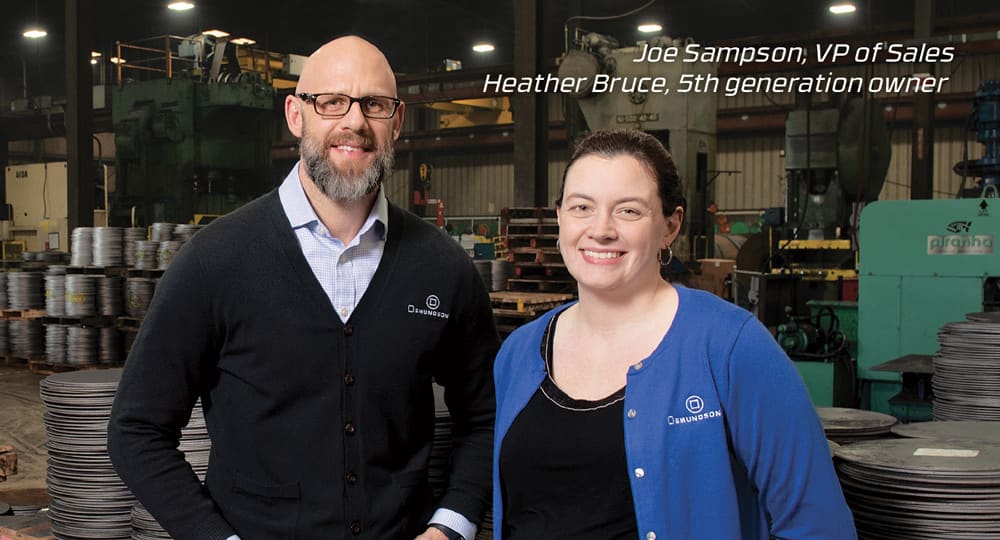 “Rice is so sharp and hard to handle; you have to use leather gloves. It’s a very aggressive product and, on their first test, they’ve been thrilled with how it works chopping up rice stalks.”

Now on the team is the 5th generation Osmundson leader, Bruce’s daughter, Heather. Bruce says Heather, who is vice president of production, has finished a collegiate career to prepare her for leadership in the organization and they share a passion.

“She loves manufacturing and has designed her career to come in this direction between 3 undergraduate majors and a double business major.”

Bruce sees a bright future for his daughter and the company, which is poised to exploit the current trends in agriculture. “At the last FEMA conference a friend of mine spoke about the fact that there will continue to be fewer farmers cultivating more land, so they will have to go faster.”

Bruce says making stronger tools enabling manufacturer’s machines to cover fields more rapidly will lead to additional expansion for Osmundson Co., “The future is anything that speeds up planting and cultivation.”

Farm Equipment‘s Ag Equipment Entrepreneurs series is brought to you by Osmundson.

From our made in America steel to our made in America process, we are proud to stamp Made in the USA on every part we manufacture. Osmundson blades use a boron based steel grade exclusively designed for quality, durability and impact resistance throughout the life of the part. Each raw element and steel chemistry is carefully measured, analyzed and calculated to ensure consistency 100% of the time. We use United States steel, which sets the standard for quality, performance and innovation that the rest of the world continues to follow. Our blades are put to the test in every field condition in every continent of the world. Our vast variety of sizes, shapes and thicknesses meet and exceed the specific needs of each end user. The Osmundson blade is committed to manufacturing with strength, pride and innovation. Visit www.osmundson.com.

6 Ways to Make Your Harvest Profitable