Farm consolidation over the last 3 decades has led to fewer, but larger production farms, while small lifestyle farms have risen in number and will drive demand of small farm equipment.

Dow and DuPont. Monsanto and Bayer. John Deere and Blue River Technology. AGCO and Precision Planting. In almost every segment of the agriculture industry — from chemical and seed, to farm equipment and technology — consolidation is taking place. And the cause of these major mergers is a direct reflection of what is taking place on the end user side: farm consolidation.

Over the last 3 decades, farm production has continued shifting to larger operations, with crop acreage being concentrated into fewer, but larger farms, according to statistics by the USDA Economic Research Service (ERS). But while the number of large farms is decreasing, the number of small lifestyle farms is growing rapidly. All of which will impact the number of farm equipment dealers there are and the size of equipment they’ll sell, Glass says. 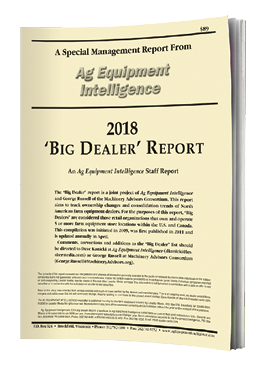 While the 2017 census had not been released as this article went to print, Glass predicted the trend would continue, estimating there would be only 2,065,000 farms as of last year.

Despite the number of farms decreasing, he points out that the total number of acres has not declined at the same rate. In 1982 there were 986 million acres, while as of 2012 it was down to 915 million.

“What that says is the average farm size has gotten larger,” Glass explains. “As these guys go out of business, their neighboring farmer has picked up the property or they’ve rented it out to someone. It’s still staying in production.”

The report also found that “consistent with the shift in value of production, cropland acreage has also concentrated into fewer, but larger farms,” stating that 36% of all cropland in 2012 was on farms with at least 2,000 acres of cropland, compared to 15% in 1987. During that same timeframe the amount of cropland operated by midsize farms (those with 100-999 acres) fell. In 1987, 57% of U.S. cropland was operated by midsize farms. By 2012 that number was 36%, the same share held by the largest farms. (See Figure 1.)

The report found consolidation in crop production has been persistent in each 5-year census from 1982 to 2012, regardless of the crop, with midpoint values for harvested acreage increasing in 53 of the 55 field, vegetable, melon, fruit, tree nut and berry crops reviewed. Most increases were substantial, as 40 of those crops saw their midpoint values

Consolidation in livestock, on the other hand, has been episodic, with little changes occurring over some period followed by dramatic shifts. The USDA ERS found livestock production has consolidated for most livestock sectors since the 1980s, except for beef cow-calf operations.

The USDA ERS notes that consolidation appears to have slowed from 2007 to 2012, with the average annual midpoint growth for the seven livestock sectors (broilers, fed cattle, hogs and pigs, turkeys, beef cows, egg layers and milk cows) falling to 3.3% in that 5-year span compared to 6.3% from 1987-2007.

As consolidation has grown, so has farm specialization, in both crop and livestock operations. Instead of growing several crops, the report found more farms are focusing on no more than two or three. For example, 57% of corn production in 2015 occurred on farms that produced no more than two crops, compared to 37% in 1996, the report says. Similar patterns have occurred in soybeans, cotton, hay, peanuts, rice and wheat.

at least double over that time period. (See Figure 2.)

FIGURE 2. The midpoints for harvested acreage more than doubled for corn, cotton, rice, soybeans and wheat between 1987 and 2012, and increased persistently in each census year, except for cotton in 2012.

For livestock operations, the trend has been to focus solely on the animals and rely on outside sources for feed. In 1996, only 22% of livestock farms had no crop production, while 36% had none in 2015.

“Specialization grew in each major livestock commodity in 1996-2015, and is highest in poultry, where over 52% of 2015 production occurred on farms with no crop production,” the report says, noting that because poultry manure is lighter than other manures, and therefore easier to transport, it’s more likely a contract poultry operation can dispose its manure off the farm, further discouraging the growth of crop production on the farm.

The reason farm consolidation is occurring is because it takes a larger number of acres to be profitable today, Glass says.

“In the ’70s and ’80s, a farmer with 500 acres could not only be profitable, he could actually have a very comfortable life,” he says. “Now a 500-acre farm, you just cannot grow enough crop to make any money out of it. If you cover your expenses, you’re doing good,” he says.

“I think the financial truth is that if you don’t have a big farm, you’re not going to make enough money to stay in business…”

But those farms with at least $1 million in revenue only make up 4% of total farms — 92,000 farms total. To provide a visual, Russell says that if one person represented each of those farms, everyone in that 4% would fit in the University of Nebraska’s Memorial Stadium in Lincoln, Neb.

The USDA ERS report also points out the significant role technology has played in consolidation over the past 3 decades. As equipment has gotten larger and faster, it’s allowed a single farmer or farm family to manage more acres. Innovations in field practices, such as no-till farming, have also helped reduce the amount of time farmers spend on field tasks, also allowing them to manage more land.

FIGURE 3. Larger family farms averaged a stronger financial performance in 2015 than smaller farms. Twenty-four percent of farms with gross farm cash income (GFCI) of at least $5 million had operating profit margins (OPM) of 10-25%, while 50% had OPMs higher than 25%. Most small farms had an OPM of less than 10%, while 54% of midsize farms had at least 10%.

Because large farms have greater profit margins, they’re able to continue investing in the farm to grow it even further. The Federal Reserve Bank of Kansas City’s Economic Review special issue “Agricultural Consolidation: Causes and the Path Forward,” published in 2017, explains that large farms are typically able to purchase machinery, hire additional labor — especially those with expertise in areas like technology, risk management and finances — and rent additional farmland, among other advantages, which will further consolidation.

To sum it up, if a farmer wants to stay profitable, the farm has to get bigger and more efficient.

“I think the financial truth is that if you don’t have a big farm, you’re not going to make enough money to stay in business,” Glass says.

While finances play a primary role in farm consolidation, Glass doesn’t believe many farmers are actually going out of business. Instead, he thinks the prime mover for consolidation is when a farmer retires and doesn’t have a younger generation who wants to take over the farm.

“Quite often, consolidation happens within the family,” Glass says. For example, if two brothers are approaching retirement, and one has a child who wants to farm and the other doesn’t, there’s a strong possibility that child will take over both of their farms, either by buying them or leasing them.

“No matter how they acquire it, it’s a consolidation taking place because what you’ve done is taken two farmers and replaced them with one,” Glass says.

He also dismisses the notion that there aren’t enough young farmers coming into the business. He points out that when the ag census is conducted, it asks for the principle operator, which is where they get the average farmer age. But it’s likely there are younger generations working on the farm. “I don’t think there’s any danger of us losing farmers,” he says.

FIGURE 4. In three decades, farms with the highest annual farm sales have grown in the percent of total farm sales, while farms with lower revenue have steadily decreased.

“The number of farmers is going to get smaller. But that’s more a financial function than anything else.”

Dealer Consolidation a Reflection on Farms

When Glass began tracking tractor sales in 1969, he soon realized the key to forecasting sales was to look at the number of farms in the country.

“There’s a basic thing you have to look at every time with consolidation,” he says. “You really have to go back to the user, the end farmer. And you have to ask, how many farmers out there are willing to buy something? That’s going to determine how many dealers are going to be selling something.”

Glass says in the 1970s there were around a dozen tractor manufacturers, while today that’s reduced down to four main ones.

“If the dealer can’t be profitable where he is, and the manufacturer is not profitable with the dealer organization they’ve got, they just start making plans. ‘OK, we’re going to reduce the number of dealers we have, give dealers bigger areas to work,’” he says.

While the number of production farms is decreasing, there’s another trend occurring: an increase in lifestyle farms, also known as hobby farms.

According to the USDA ERS, 90% of farms were small and accounted for 51% of land operated by farms in 2016. However, they only make up 23% of production.

Glass believes that while the number of lifestyle farmers will not change significantly, the amount of acreage they operate will increase. He predicted for 2017 that the average farm size would be around 440-450 acres per farm, a slight increase from 430 acres reported in the 2012 census.

This is an important trend for dealers because Glass predicts tractors with less than 40 horsepower are going to make up about 60% of tractors sold in the U.S.

“These guys are buying tractors and they’re mowing grass with them, they’re grading their driveways, they may have a couple horses and they’re cleaning their barn with their rear blade with the tractor,” Glass says.

“And that’s about all they do with it. A farmer will typically put anywhere from 300-500 hours a year on their tractor. A lifestyle farmer averages about 75 hours a year. They’re not there to produce an income.”

He adds that the northeastern part of the U.S. — from Virginia up through Ohio, Pennsylvania and into New England — is a dominant area for small tractors because it’s filled with small farms, predominantly lifestyle farms.

Small tractors are also big in the southeast, southwest and California where there’s a lot of vegetable production.

“I think the growth in farms is going to come in lifestyle farms.”

Glass also points out that not all lifestyle farms are small in size. Last year he visited a lifestyle ranch in New Mexico. While it was once a full production ranch, today it’s used as a place for the owner to go hunting and fishing. He also knows of another 5,000-acre farm in Nebraska where the owner did the same thing by turning it into a personal game preserve.

Even though not all lifestyle farms are small in acreage, they’re still buying smaller equipment, simply because they don’t need anything bigger.

“Because the more you have going into lifestyle farms, the less you have that’s producing agricultural products, and the less it’s going to require the bigger, high-dollar tractors, combines and those sorts of things.”

Laura Barrera is the managing editor of No-Till Farmer and Conservation Tillage Guide magazines. Prior to joining No-Till Farmer, she served as an assistant editor for a greenhouse publication. Barrera holds a B.A. in magazine journalism from Ball State University. Contact Laura: lbarrera@lesspub.com

As U.S. Farms Get Bigger, They Require Multiple Operators