Equipment dealers should keep a close eye on organic farming operations in their areas. This segment of agriculture continues to exhibit strong growth patterns, and American consumers increased their purchases of organic products once again in 2017, according to a recent survey from the Organic Trade Assn. While many of the smaller organic farmers often rely on older, used machines, individual operations are growing in size and, at some point, require better equipment.

In mid-May, the business association, in partnership with the Nutrition Business Journal, published the findings of its 2018 Organic Industry Survey. The survey was conducted between Jan. 25 and April 22, and 250 companies participated.

“Our survey shows there are now certified organic products in the marketplace representing all stages of the life cycle of a product or a company — from industry veterans to start-ups,” says Laura Batcha, chief executive officer and executive director of the Organic Trade Assn. “Now we’re able to choose organic in practically every aisle in the store.”

Even with the record breaking year in organic sales, the year-over-year increase is smaller than the gains that organic products saw in 2016 compared with 2015. Sales increased by 9% for that one year span. Association officials say slower growth in the organic dairy and egg category is to blame. Organic egg and dairy grew 0.9% to $6.5 billion.

Fruits and vegetables continue to be the largest organic food category, with a 5.3% growth up to $16.5 billion for 2017. Sales of organic dried beans, along with dried fruits and vegetables, increased by 9%, reflecting growth in demand for legumes and plant-based products.

The Organic Industry Survey first measured organic sales in 1997, when sales were pegged at $3.4 million. The 2017 installment of the survey shows a growth in sales of nearly 15 times that of 1997. 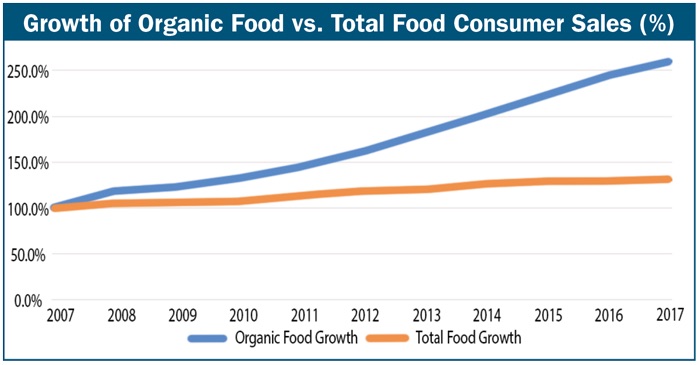 [Podcast] Lessons from 2017 to Improve Used Equipment Sales in 2018