What Caught Your Attention in 2017?

Read these summaries of the most-viewed content via Farm Equipment’s Digital Media offerings during the first 11 months of 2017.

As trends and forecasts constantly shift throughout the ag world, it’s important to accurately keep up with the most newsworthy topics. The Digital Media Dept. at Lessiter Media conducted an “audit” of Farm Equipment’s content for 2017 to show what is gathering the lion’s share of attention on the industry’s laptops, tablets and mobile devices. The list below is a “journal,” so to speak, of some of the most talked about content for the past 11 months. The Farm Equipment staff monitors these analytics to keep a pulse on readers’ concerns, and go to work asking questions to provide actionable content to address these issues. To see the original piece (and ensuing industry commentary), you can type the article headline into the Search position at the upper right hand of the home page at www.Farm-Equipment.com. Additionally, if you’ve missed any content in real-time, you can catch up by registering for our FREE e-newsletters. We’ll connect you to breaking news and commentary as it occurs, and also provide updates on other content, including webinars, podcasts, videos and more. 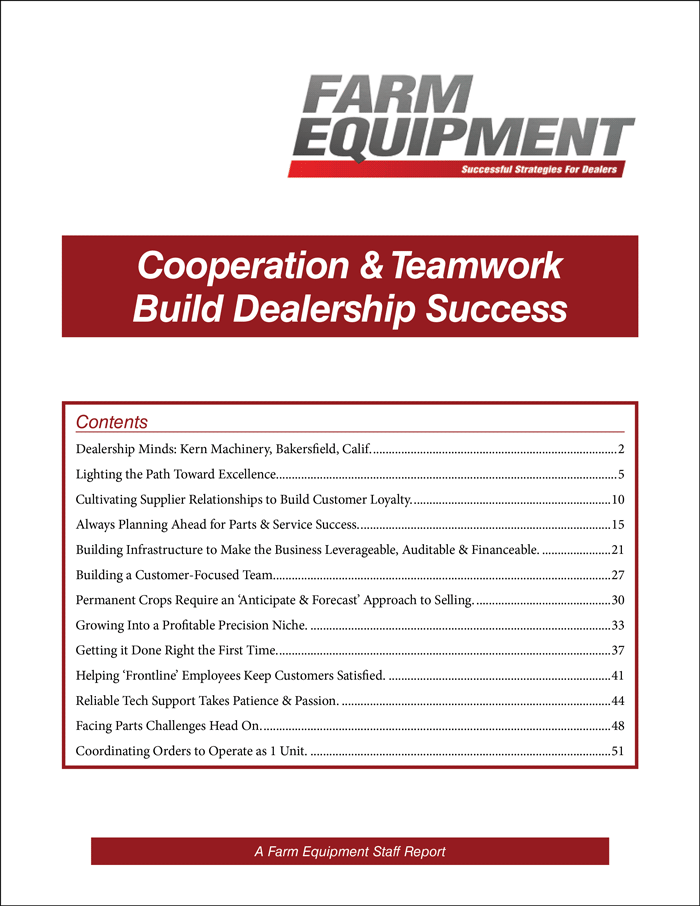 The most downloaded e-book of 2017 was “Cooperation and Teamwork Build Dealership Success.” This free 53-page Special Report features insights from 15 different employees of Kern Machinery, a highly successful 7-store dealership based in Bakersfield, Calif. Several members of the Farm Equipment staff visited the operation firsthand to share the dealership’s secrets to success, from bilingual employees to developing a precision niche, all helping Kern Equipment to double their revenue over the past 5 years and add over 155 employees.

The most viewed video of 2017 was filmed by Executive Editor Dave Kanicki. In it he interviews Vermeer product manager Josh Vrieze, featuring the manufactuer’s first self-propelled baler. While only up for 4 months, editors suspect its popularity is due to the ground breaking nature of the new product. An additional video from Kanicki’s visit with Vermeer, titled “How Vermeer’s ‘Skunk Works’ Approach Resulted in the First Self-Propelled Baler,” provides a behind the scenes look into Vemeer’s innovative strategies, specifically their mission to provide and meet the unarticulated needs of customers. 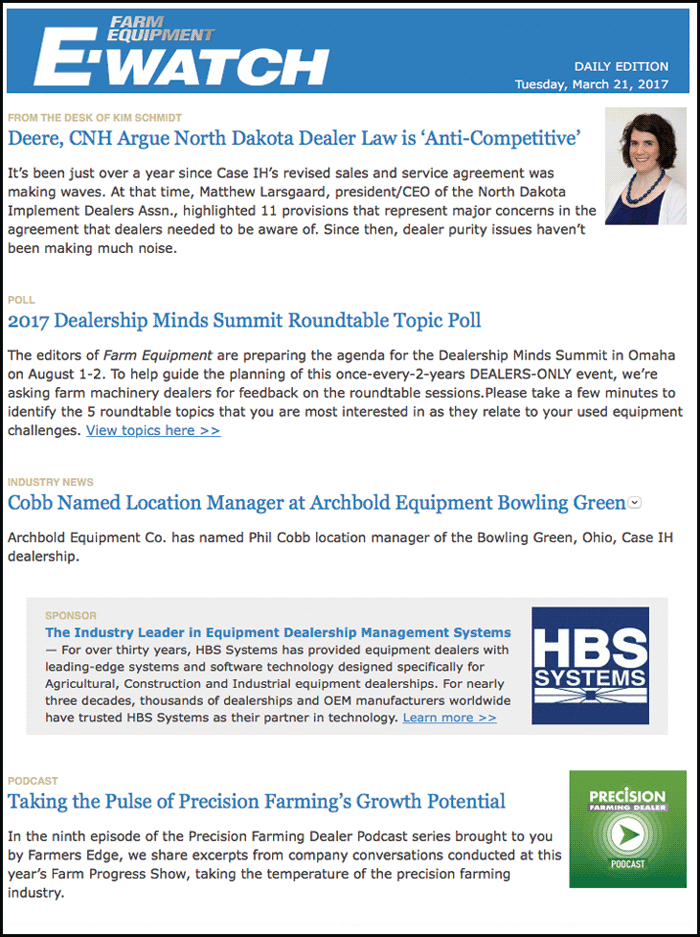 This piece by Kim Schmidt on March 20, 2017 addressed the news about John Deere and CNH’s response to the passage of North Dakota’s Dealer Bill of Rights law. The OEMs claimed the law was anti-consumer and anti-competitive, centering around the debate on mandatory equipment purchases and reimbursements. Since the article’s posting, which has generated several direct responses on the website, Deere & Co., CNH Industrial and other OEMs filed a lawsuit to block the law, which was to take effect on Aug. 1. A final ruling on the lawsuit is expected to be made by the end of December 2017. 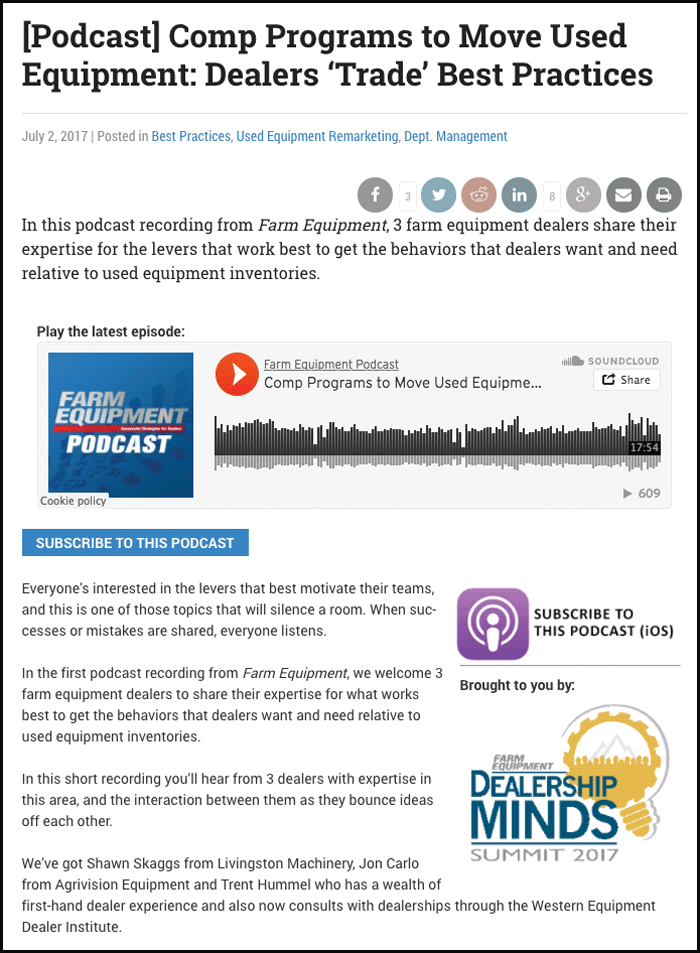 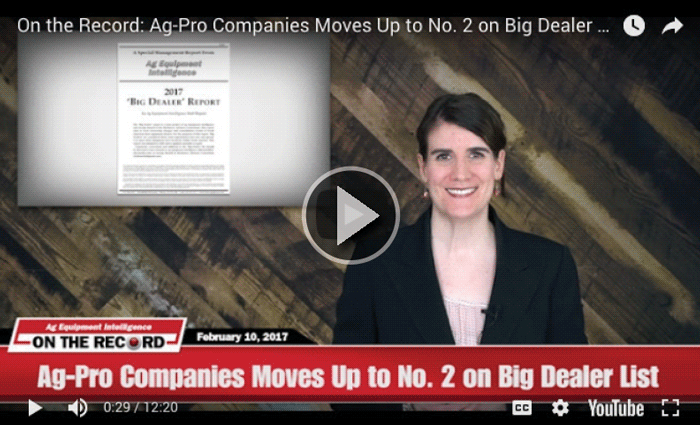 Most Viewed On the Record Newscast: Ag-Pro Companies Moves Up to No. 2 on Big Dealer List

The third broadcast of the year for Ag Equipment Intelligence’s On The Record has claimed the title of most watched episode for 2017. Kim Schmidt examines Ag-Pro Companies’ latest acquisitions and changes to the “Big Dealer” list. While Jack Zemlicka, in the Technology Corner, discusses the idea of a Tesla for tractors model for the ag industry. Since January 2017, On The Record is also available in podcast form via iTunes, Google Play, Soundcloud, Sititcher Radio, TuneIn Radio and the Farm Equipment website. 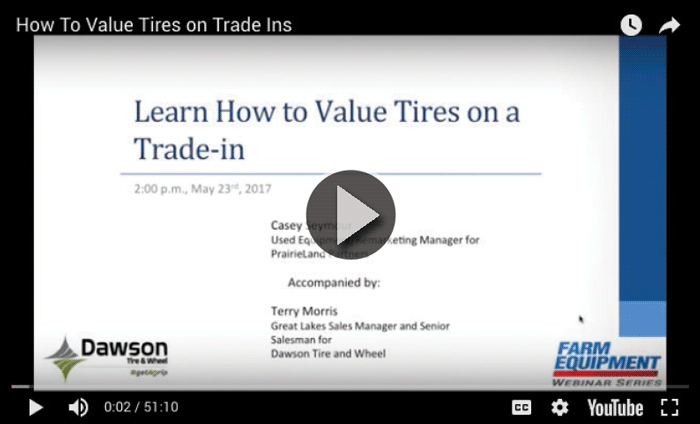 Most Viewed Webinar: How to Value Tires on Trade-Ins

The most viewed webinar of 2017 was delivered on May 1, 2017 and was presented by Casey Seymour, remarketing manager for 21st Century Equipment and Terry Morris, Great Lakes sales manager and senior salesman for Dawson Tire and Wheel. In this webinar, both men discuss the importance of knowing the value and condition of any used machines and tires. The webinar provides an in-depth look at how tire care, examination and education can influence the trade-in value. 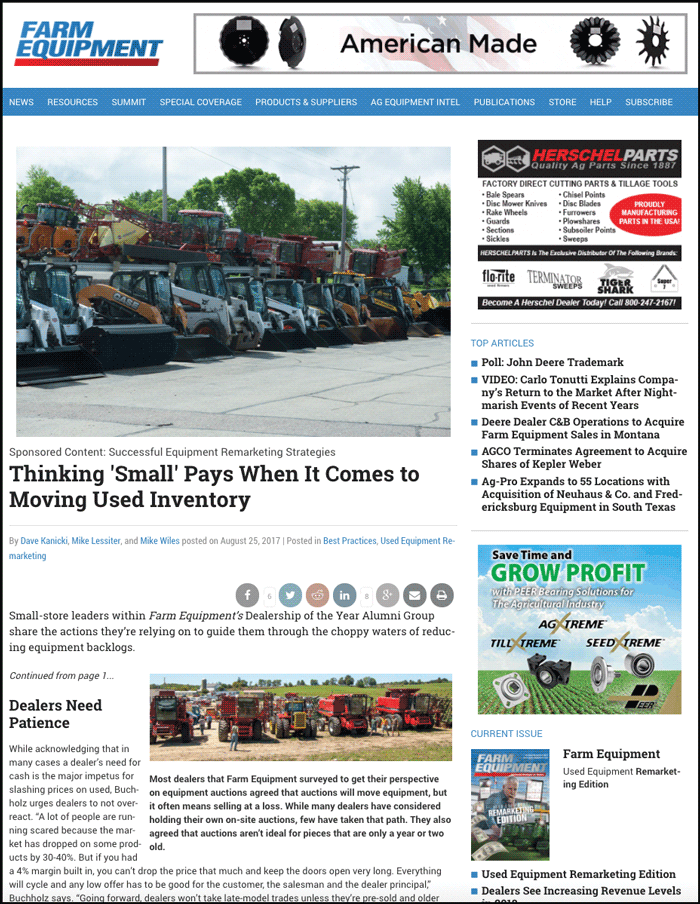 Farm Equipment created a new online series, “Successful Equipment Remarketing Strategies,” to provide readers with the best practices on how to promote and sell used equipment. For this collaborative feature on used equipment turnover, we spoke with with Leo Johnson of Johnson Tractor, Tom Janson of Janson Equipment and Mark Buchholz of Buchholz Equipment. Takeaways for this article included sections on: ‘Slash the Price’, ‘Dealers Need Patience’ and ‘No Trades — Thank You.’ In sharing multiple viewpoints, the content showcases how dealers can combat used equipment and trades, and how to make the best of the machines still sitting on the lot. 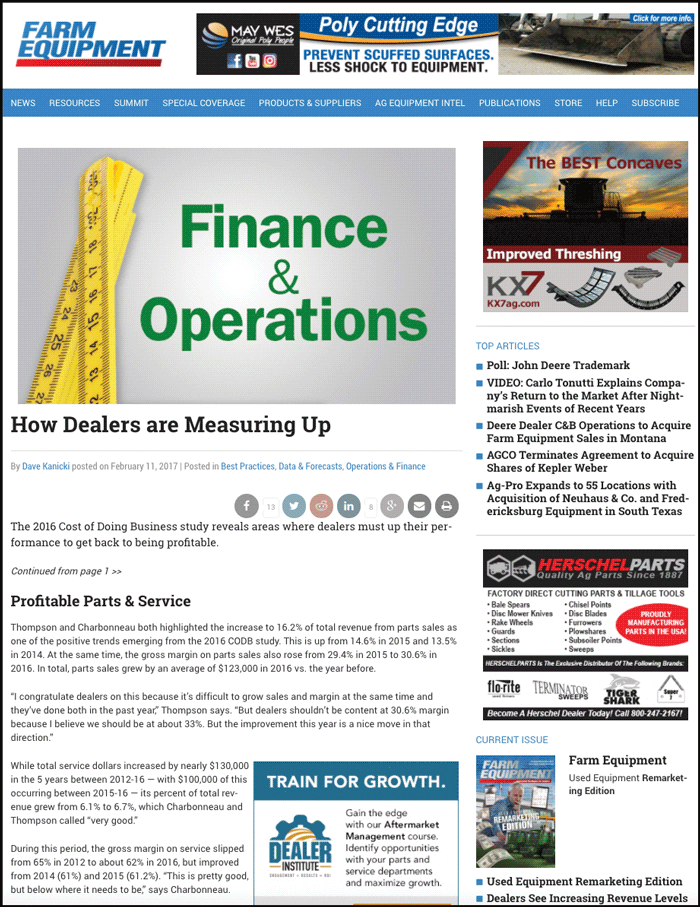 Most Viewed Feature Article: How Dealers are Measuring Up

When looking at the most viewed article, “How Dealers are Measuring Up,” readers great to view the numbers from the analysis of the Cost of Doing Business study for 2016. The numbers speak volumes about what dealers have been doing well and what they needed to focus on in 2017. The increase in average parts revenues and average service revenues, to 16.2% and 6.7% respectively, are two of the many notable trends touched on in this article that gives an in depth look at how dealerships performed during the last 5 years (2012-16) . 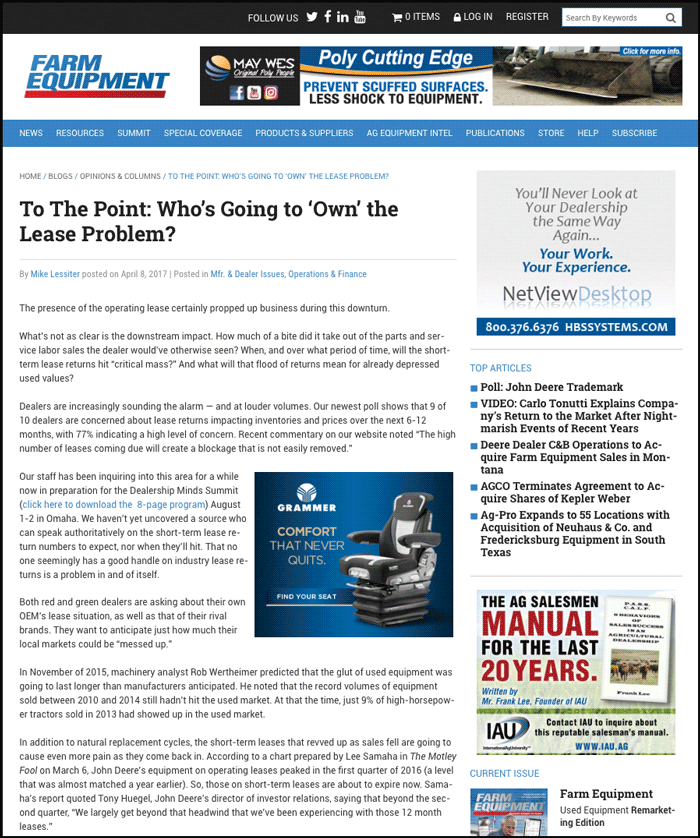 Most Viewed Print Editorial: Who’s Going to ‘Own’ the Lease Problem?

This piece written by Editor Mike Lessiter on April 8, 2017, addresses a common concern among dealers about the high number of short-term lease returns coming due, and their anticipated impact on revenues and prices for the next 6-12 months in the used equipment market. While referencing a poll in which 77% of dealers say they are highly concerned about the anticipated blockage in the used equipment market from these leases, Lessiter also notes the lack of an authoritative voice on the subject, with manufacturing executives, including John Deere director of investor relations Tony Huegel, questioning the long-term role of operating leases in the industry.

Breakthroughs That are Reshaping Agriculture