Precision Technology Gets a Boost as Use of Strip-Till Expands

The 446 farmers who responded to the 4th Annual Strip-Till Operational Benchmark Study strip-tilled 469,425 acres in 2016, up 12% over the previ­ous year’s total of 433,004 acres. On average, farmers reported strip-tilling about 75% of their total acreage, the highest total in the history of the survey and well ahead of the last two studies, which averaged about 63%.

Farmer’s use of strip-till has contin­ued to grow as they seek to empha­size soil health along with effective soil seedbed preparation while reduc­ing inputs and increasing crop yields. It’s often referred to as a “marriage of no-till and full-width tillage.” Along with strip-till’s growing use is the increasing adoption of precision farm­ing technologies.

Farmers who have adopted strip-tillage are also benefiting through increasing yields, says Jack Zemlicka, managing editor for Strip-Till Farmer, and author of the report, which appears in the August 2017 issue of the Conservation Tillage Guide. “Increasing yields isn’t always the primary motivation farm­ers cite for adopting strip-till, but accommodating growing conditions and a cooperation from Mother Nature resulted in a nearly double-digit bump in average corn yields in 2016.

“After back-to-back years of 191 bushel per acre averages, 2016 saw respondents average 199 bushels per acre of strip-tilled corn, by far the highest total in the history of the study,” says Zemlicka. 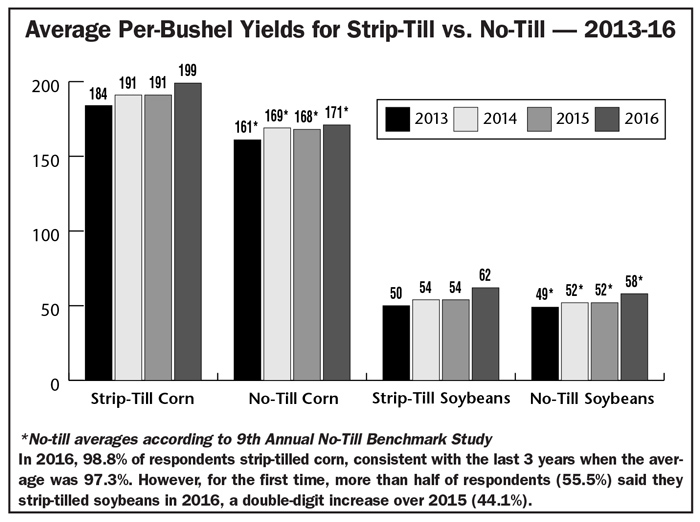 Because strip-tillage requires careful placement of seed and fertilizer in a 6-8 inch strip, precision technology often plays a critical role in the process. While auto-steer and GPS guidance are almost considered standard on many farms, more progressive sys­tems including variable-rate drives, implement guidance and unmanned aerial vehicles are regularly utilized by strip-tillers.

Nearly 40% of survey respondents report using variable-rate applica­tion of fertilizer in 2016. Adoption of implement guidance increased dra­matically in 2016, to an all-time high of 27.5%, after a benchmark study low of 17.8% in 2015.

Use of RTK-level GPS correction for strip-till operations increased slightly to a record high of 81.3%, an 11% bump over 2013 data. Only 7% of strip-tillers did not use any type of GPS guidance in 2016.

When it comes to the most popular brands of GPS systems, John Deere maintained its stronghold at the top of the list by a nearly 2 to 1 mar­gin over second place. Some 42.8% of strip-tillers utilize Deere systems, down slightly from 2015’s 43.1%. 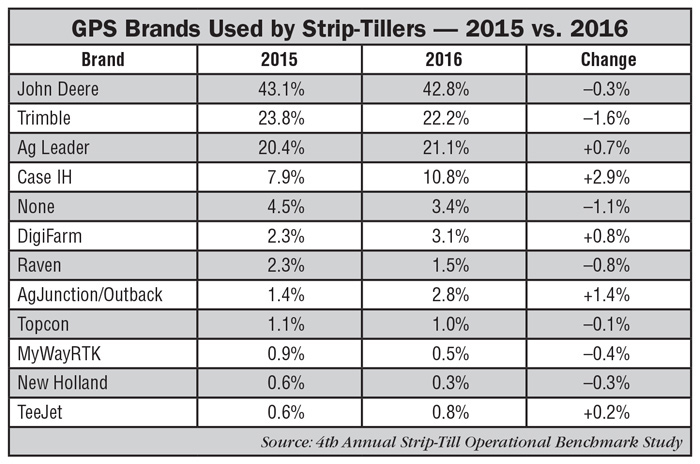 Two new questions were added to the bench­mark study for this year. The first asked strip-tillers if they utilize an unmanned aerial vehicle system in their operation, with 22.1% saying yes. The second asked strip-tillers if they own their own sprayer and 88.3% said yes. This total was higher than the 83% of no-tillers who own either a self-propelled or pull-type sprayer according to No-Till Farmer’s 9th Annual Operational Practices Benchmark Study.

Additional data from the 4th Annual Strip-Till Operational Benchmark Study can be found at www.No-TillFarmer.com.