There’s little doubt that there are fewer farm equipment dealers than there were a decade ago, but, in the case of John Deere dealer locations, the change isn’t as significant as you might think. The biggest reduction in Deere dealers has come in the retail locations handling the company’s turf equipment. 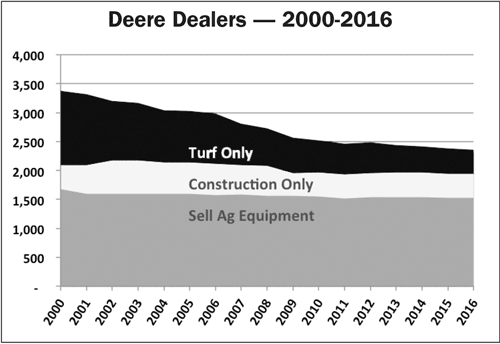 As reported in the 2017 Big Dealer report, compiled by Ag Equipment Intelligence editors and the Machinery Advisors Consortium, since 2000, Deere & Co. dealerships, including ag equipment, construction equipment and turf products, in total have decreased by nearly 30%.

The biggest loss of Deere dealers came in those handling turf equipment. From a high of 3,380 dealers in 2000, Deere’s turf equipment dealers declined by more than 1,000 store locations by 2016. Today, the number of retail locations handling Deere turf products is down by about 66% since 2000.