MILWAUKEE, Wis. — Exports of U.S.-made agricultural equipment declined 15.8% for the first three quarters of 2015 compared to January-September 2014, for a total $5.8 billion shipped worldwide.

Asia recorded double-digit gains, however, while South America and Europe had the steepest declines, according to the Assn. of Equipment Manufacturers (AEM). The AEM equipment manufacturing trade group cited U.S. Department of Commerce data it uses in global market reports for members.

The third quarter of 2015 marked the seventh consecutive quarter that U.S. agricultural equipment exports and imports experienced year-over-year declines. These results are in line with the domestic and global demand trends. AEM’s third quarter North American ag equipment industry conditions trends report initial results indicated that 76.75% of respondents felt demand had fallen compared to the same period the previous year. Only 13.95% of respondents felt demand had remained unchanged. That marked the sixth quarter that more people felt the market demand was decreasing vs. increasing. Also, according to the survey, 55.2% of exporters felt their exports had fallen year-over-year while 31.5% felt they had remained unchanged. 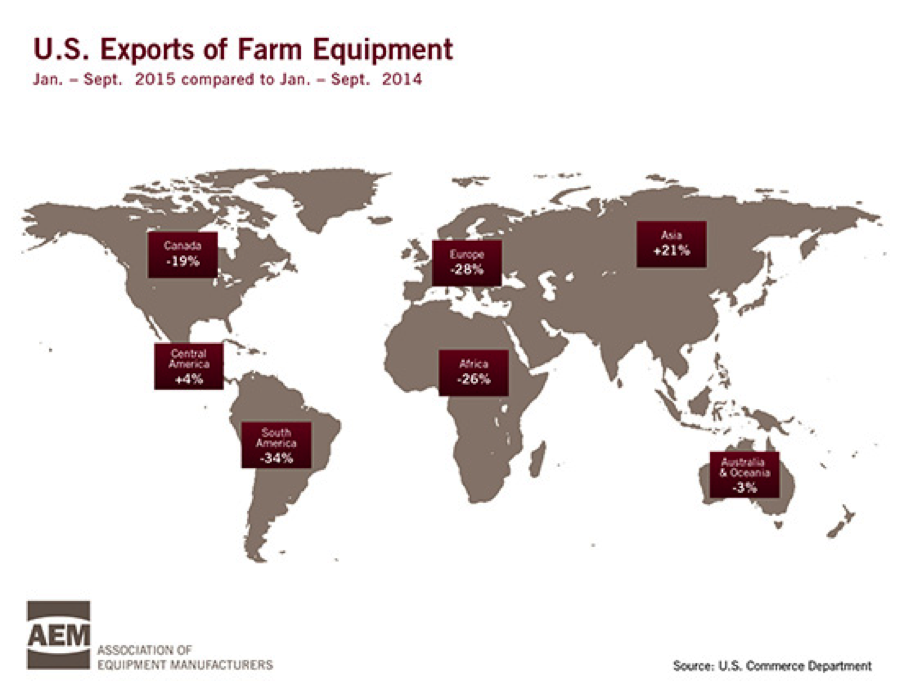 From a global perspective, our Agritech Business Barometer, a report from the Agrievolution Alliance, indicated that agricultural equipment manufacturers still remain pessimistic. However, there were some variations between regions. North America and South America, namely the U.S. and Brazil, continue to experience a strong downturn as new orders fall short. Additionally, Brazil is also struggling with strong credit restraints. Eastern markets such as Russia, China and India seem to be in a better mood, driven by optimism regarding government support. Optimism in the eastern markets seems to be supported by the double digit uptick in exports to these markets.

The deteriorating export position does not only pertain to the agricultural machinery industry, but also to the larger goods market. In November, overall U.S. exports experienced a bump that was driven mainly by the service economy as that sub-segment is less impacted by the strong dollar. The overal export of goods was actually down 8% from a July 2014 peak. Aside from a strong U.S. dollar, the lower commodity prices are taking a toll on worldwide farm income, profitability and thus exports.

The top countries buying the most U.S.-made agricultural machinery during the first three quarters of 2015 (by dollar volume) were:

AEM’s Agricultural Equipment Global Markets Export report and select other reports are available to the public through the AEM store (www.safetymaterials.org). AEM members may access the global markets export report and the Agrievolution report on the AEM website (www.aem.org) in the Market Intelligence section.

Custom detailing exports by 10 Digit HS code to various countries worldwide, as well as an overview of export market opportunities by product, are available to members on request. For more information, contact AEM’s Benjamin Duyck, director of market intelligence (bduyck@aem.org).