Nearly one-half of North American farm equipment dealers are expecting that full-year revenues from the sale of new equipment in 2014 will be down vs. 2013. This is about the same percentage of dealers who are projecting declining revenues in the year ahead.

Of the remaining dealers, 17.2% say there will be little or no change this year compared with the previous year, and nearly half, or 48.4% anticipate lower revenues in 2014 compared to 2013. Of the 285 dealers who responded to the question, “What is your best estimate of your 2014 new equipment revenue vs. 2013 new equipment revenue?” in Ag Equipment Intelligence’s 2015 Dealer Business Outlook & Trends survey, 34.4% reported that by year-end they expect their new equipment revenues to have increased vs. 2013.

Last year at this time, 39.7% of dealers were forecasting a dropoff in new equipment revenues for full-year 2014. The percentage of dealers’ whose current estimate for a revenue increase isn’t too far off their outlook for last year at 34.4%.

The big difference comes in dealers who now estimate that new equipment revenues will decrease for 2014 vs. their forecast a year ago.

In September 2013, only 24.3% of dealers projected lower revenues for 2014. With this year’s survey, nearly double that number, 48.4%, are estimating declining new equipment revenues for the full year 2014.

Of course, the wide difference between the two comes in the “little or no change category.” A year ago, 36% of dealers in the survey projected essentially “flat” new equipment revenues. At this point, as dealers have far more visibility into the current year’s results, only 17.2% expect “little or no change” for all of 2014. 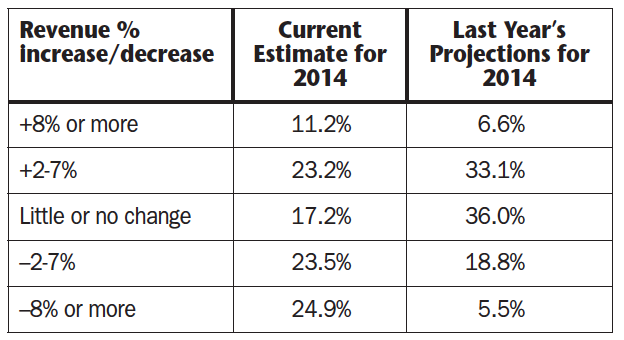 Nearly Half of Dealers Say Used Inventory Remains 'Too High'