When you hear someone say that it’s a good time to be in agriculture, you can take their word for it — without question. Ag will always be cyclical; there will always be blips here and there. But if you examine ag’s long term trends, you would be hard pressed to find another industry with such solid fundamentals.

I was looking through Deere & Co.’s February/March investor’s presentation and two slides from that report tell much of the U.S. agriculture story during the past 40-plus years. Farm equity is at an all-time high, while on a comparative basis, both debt to equity and debt to asset ratios have never been so low. Take a look at the two slides here for a better picture of how fundamentally strong ag has been performing over a very long period of time. 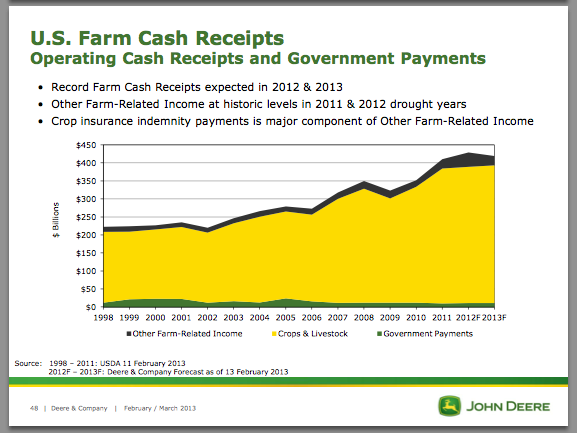 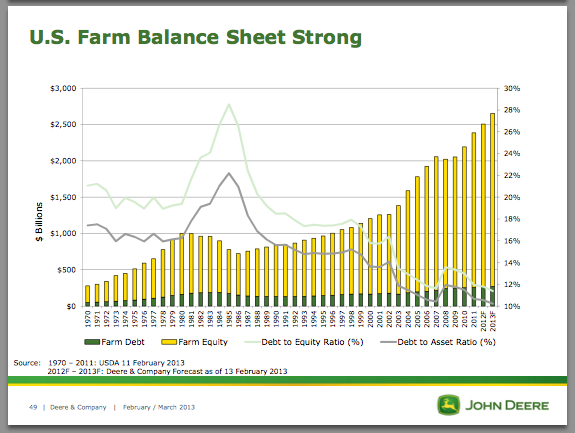 In the year ahead, USDA is forecasting a drop off in cash net income, it nonetheless is expected to remain 47% above the 2002-11 average of $83.8 billion.

A few months ago, I interviewed a dealership owner who just sold his business to his two sons. He says he hesitated to do the sale because, after surviving the last two major ag down cycles, “I paid my dues and wanted to enjoy this current run for as long as I could.”

I heard someone say recently that, “If a dealership isn’t making money in this market, they probably never will.” I say, enjoy it while it lasts. As one of the sons who bought his father’s dealership told me, “I know it’s not always going to be as lucrative as it right now, but it’s sure is fun.”

Ag Commodity Prices to Rise in the Long Term