Equipment and farm services dealers who sell the “dollars and cents” benefits of precision farming have some new sales fodder. This includes a pair of USDA reports that look at cost savings and increased returns for corn farmers using information-based production tools on average size operations.

The 2016 reports show cost savings ranging from $13 to more than $25 per acre when growers use GPS (global positioning systems) yield or soil maps in conjunction with auto-steer and VRT (variable-rate technology) when applying inputs. On the return side, the reports show small but significant increases in net returns and operating profits attributed to the precision farming practices.

The research also indicates corn farmers receive a lot more bang for their buck by using yield-generated field maps rather than soil maps that require many individually located sample points throughout a field.

The USDA reports are, Sequential Adoption and Cost Savings from Precision Agriculture and Farm Profits and Adoption of Precision Agriculture by David Schimmelpfennig, USDA Economic Research Service economist. The research uses national data on U.S. field crop production between 1996-2013 (the latest available) from the Agricultural Resource Management Survey of field crop producers. The records allow an examination of detailed field-level production and financial information on a large sample of farms.

He says the economic benefits of yield mapping vs. soil mapping come because yield monitors collect information on growing conditions throughout the year that are reflected in harvest yields, thus providing a rich source of information on the effectiveness of recent practices.

Schimmelpfennig says the disparity stems from a difference in resolution of information generated by the two methods of mapping. Soil mapping requires an individual geo-located soil test for each data point. Because of cost considerations and the logistics of conducting a large number of soil samples, soil maps contain fewer data points.

“The resolution of soil mapping is just not as great as that of yield produced maps which ‘sample’ crop yields across a host of field positions during harvest,” he explains. 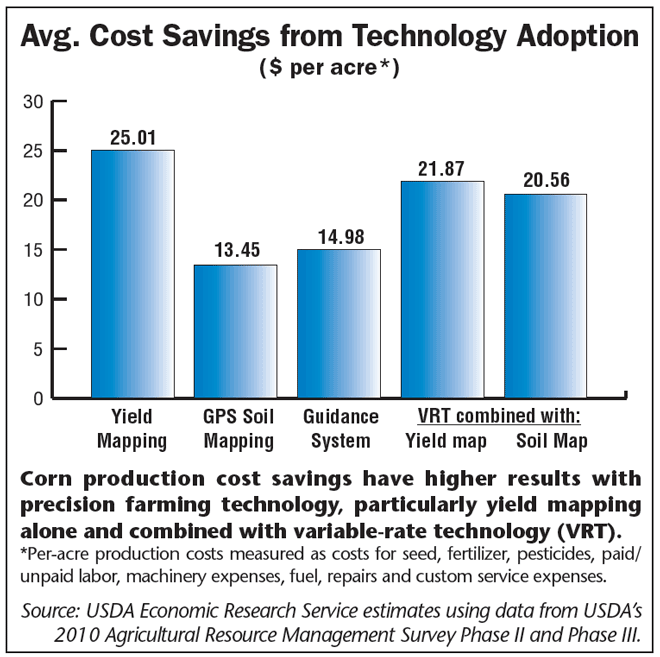 When comparing cost savings from VRT with yield mapping to cost savings from VRT with soil mapping, the economist says, “It might be expected that the additional density of information on a yield map would ‘pay off’ when combined with VRT, and the model results comfirm this. VRT with yield mapping is associated with slightly higher per-acre savings of $22 compared with VRT and soil mapping at $21.”

Additionally, guidance systems, while requiring tractor and combine steering hardware along with a GPS receiver, still showed a $15 per acre cost saving, more than soil mapping alone, he explains.

“GPS mapping overall shows the largest estimated impact among precision technologies, with an increase in operating profit of nearly 3% on these farms,” he explains. “The impact of mapping on net returns is nearly 2%.”

“PA technology can reduce operating costs by eliminating input overlaps and skips,” he says. “Even if input use and costs increase to reach yield goals under PA, yields can grow enough to increase operating profits.”

Putting a Price on Soil Erosion