By George Russell and Erik Thompson posted on February 11, 2017 | Posted in Best Practices

I am reading — for the second time in a year — Simon Sinek’s book Start with Why, How Great Leaders Inspire Everyone to Take Action. As I finished a chapter today, Sinek’s words reminded me of the many partnerships between dealership leaders that create great businesses, those who over a long time react well to change and execute well to keep customers, employees, manufacturers and investors happy.

At the core of the most successful partnerships is when two people — and in some cases more — have complementary skills that help each other to be better. 1 + 1 can equal 3. The business partnerships below illustrate this point.

We all know Walt Disney. But not everyone knows about his older brother Roy, whom Walt called “the real Disney.”

Where Walt was the dreamer, Roy was the doer. He would find the ways to get things done, or get the money to do things like finish “Snow White and the Seven Dwarfs,” the first feature-length animated movie ever made.

Roy Disney helped put together the group of companies, including the then new television network ABC, to finance one of Walt’s crazy dreams: Disneyland. Walt and Roy would frequently argue about things that Walt would want to do. In the end, Roy would find a way to get those things done.

Most of us know Steve Jobs, the driving force behind the growth of Apple Computers. Equally as important to the growth of Apple was Steve Wozniak, the technical wizard who created the first Apple products and whose DNA today still lies in the virtues of simplicity, ease of use and industry changing models. It was possible only with one Steve’s vision and the other Steve’s technical skill. 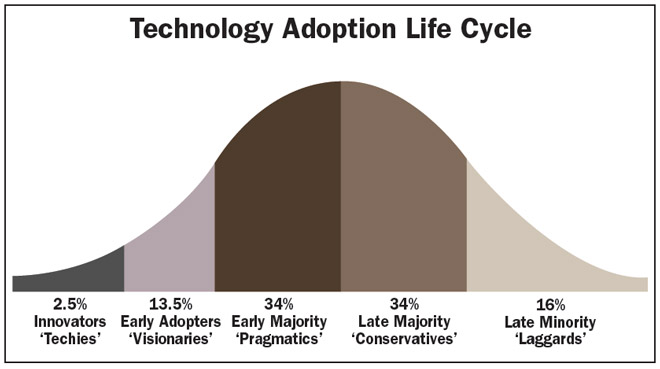 The factors that make many partnerships work is the complementary nature of the partners as well as the trust they have in each other. The Disney’s were brothers who grew up in the same household. The two Steve’s knew each other in high school before starting Apple and knew each other well.

Sinek adds another complementary factor — each partner’s position on the Adoption Curve. We described this well-known concept in our article in June 2014 called “How Farmers, Dealers Adopt New Technology.”

Walt Disney and Steve Jobs were clearly on the left side of this curve. They pushed to create new and innovative ideas. They had “vision.” But their visions needed to be supported by “pragmatics” — Roy Disney and Steve Wozniak — who could convert the visions into more than a shiny new thing.

The same thing happens in dealerships with successful, long-term partners. Whether two brothers, father and son, wife and husband or dealer principal and the finance person, one partner tends to be OK with trying new things, willing to take risks and put up with imperfection. The other partner is absolutely needed to put the people, processes, structure and finances in place as a new idea/business attracts the “Early Majority” and “Late Majority” customers, where there is the most volume and profit.

The two types need each other. The “techies” and “visionaries” need the “pragmatics” and “conservatives” and vice versa. For a business to grow, new ideas, products and services must be embraced. The “Doers” know that the business needs this even if they aren’t the ones to see them first.

Neither one is more important than the other. Great dealerships need leaders — some who are dreamers, others who are doers

Creating Partnerships with Customers Through Service