Under 40 Horsepower Tractors — Continuing to show strong results, year-to-date sales for this category is currently 7.2% above our original forecast. As the general economy grows in the months to come, this segment will most likely maintain its growth pattern. Field inventory level continues to fall and should close out the year in the mid 60,000 level. 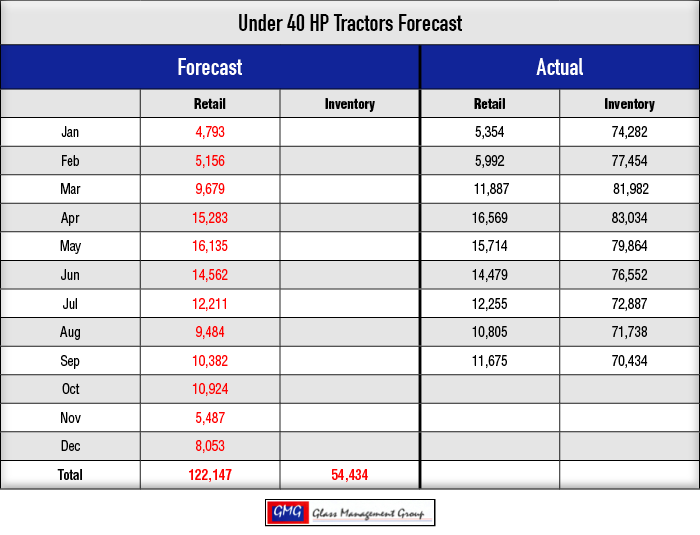 40 – 99 Horsepower Tractors — Much like the smaller tractors, this segment continues to show strength. The lower horsepower range of this segment seems to be the driver for this sustained growth. The field inventory level for this category has remained rather constant each month of the year so far. 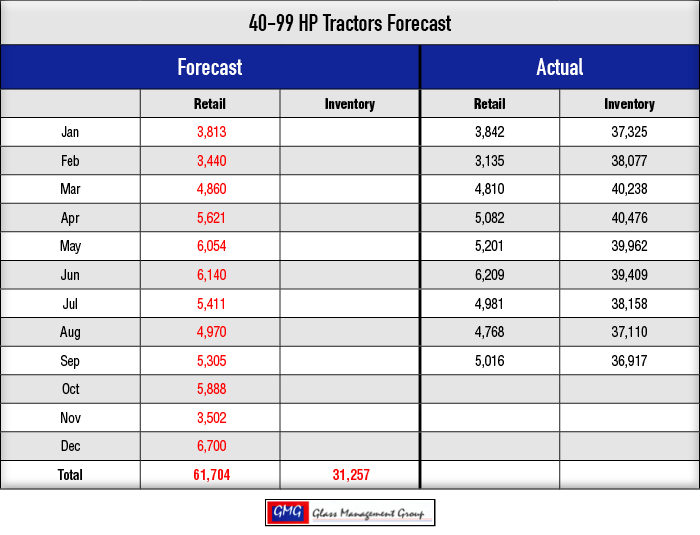 100 + Horsepower Tractors — This category remains stagnant and has consistently been below our original forecast. Field inventory has been rather flat all year long and will most likely close out the year at 10,000 units or more. 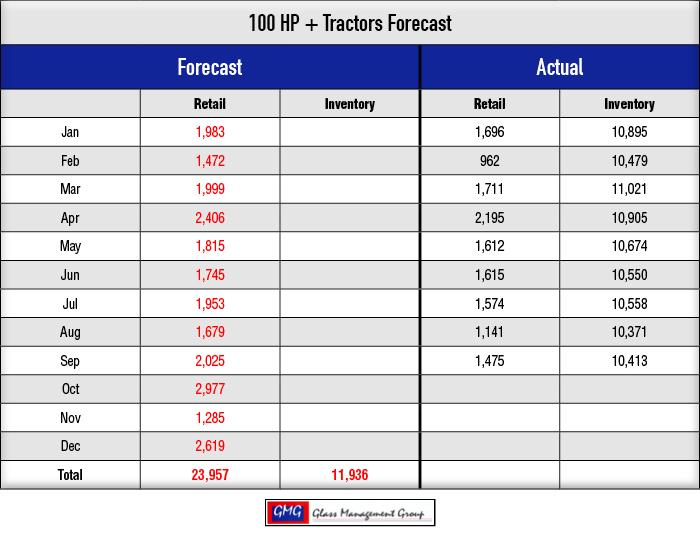 4WD Tractors — Weakness in this category of tractors continues and is approximately 17% below our original forecast. Field inventory for this segment is down about 25% from last September and has fallen somewhat during the year. 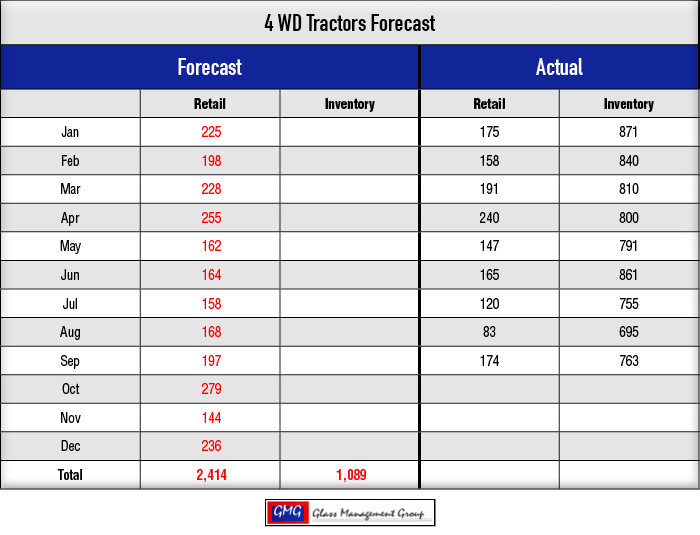 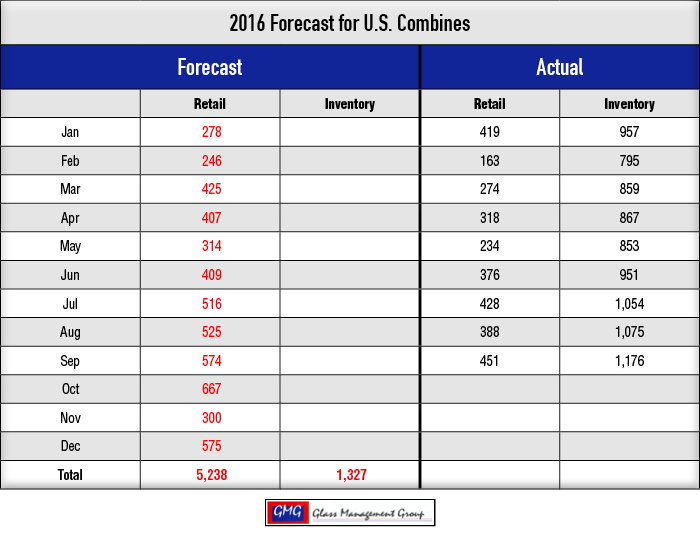 Supply and demand is alive and well in the U.S. agricultural economy. Harvest of U.S. crops has begun and brings with it a great expectation of a record yields. Like a huge seesaw, high demand for a commodity elevates the prices customers are willing to pay for that product and when there is an excess worldwide inventory, prices fall to meet the slowing demand.

Net farm income is being squeezed once again in 2016 and the U.S. Dept. of Agriculture recently announced that payments to farmers who participated in the two crop insurance programs offered by USDA will exceed $7 billion in 2016. These programs target the average commodity price for either the farm or the county, depending upon which program the farmer selected, and compares those prices against current pricing. In order to participate in these programs, farmers pay a premium to insure their crops.

Net farm income for 2016 is expected to be around $94 billion and that is more than a 30% decline from the record level seen in 2013. Even when the $7 billion in insurance payments are added to the projected net farm income for 2016, it is still 25% lower than the 2013 high point. As we have noted repeatedly, net farm income is a major indicator of the next year’s equipment sales and this does not bode well for an increase in unit sales for 2017.

According to USDA’s Farm Census, about half the farms in the U.S. do not expect to generate an agricultural income or a profit from those enterprises. Farms that do not generate an income or profits are normally considered to be the smaller operations but, in many cases, can cover substantial acreage.

I recently visited a 5,000-plus acre ranch in New Mexico that is an active cattle ranch, but its main purpose is the building of a world class hunting and trout fishing ranch. The owner is committed to rebuilding the native grasslands and maintaining the historic archeological sites on the ranch and has expended millions of dollars in those efforts. Many of the meadows had become overgrown and the owner has actively rehabilitated those areas and has planted native grasses to rebuild these grazing areas which will attract more game to the ranch.

He undertook the rebuilding of the river that flows for nearly 7 miles through the ranch in order to build a world class trout fishing environment. While these expenditures will improve the number of cattle the ranch is capable of supporting, the main objective was to reestablish a game-rich ranch. They recently purchased a new 45 horsepower tractor equipped with a front end loader and a 7 foot rotary cutter. This is the only tractor on the ranch. Since this is a private ranch and is not open to the public, there is little possibility that these improvements will generate any new income for the rancher.

Corn futures gained slightly during the month of September and finished at nearly $3.40 per bushel but still remains below the cost of production for the crop. The prospect of worldwide growth in grain inventory has eliminated any possibility of a breakthrough in corn prices. Indications from South America show that early planting of corn in Brazil and Argentina is outpacing previous years and Brazil has nearly four times as much corn planted for the 2017 season than was planted this time last year.

Soybean prices continued to hold at a sub $10 level for the month but have shown some weakness in recent times. The prospects of a large harvest has put a lid on prices at this time.

Small tractors that are typically purchased by lifestyle farmers and other smaller production farmers continue their winning ways and those dealers are experiencing a very good year. Dealers in the major farming areas of the country continue to see declining demand for their products now and in the near future.

As reported recently in Ag Equipment Intelligence, pre-selling of larger equipment is in the doldrums for the beginning of 2017. While some dealers have reported a gain in this critical area, the majority have seen a slide in unit numbers and sales dollars. We will begin preparations for next year’s forecast soon and expect the various models to show the larger tractors and combines to be weak next year.