Recent research by the Conservation Tillage Information Center shows American farmers are beginning to use cover crops in their rotations to conserve moisture, boost yields of subsequent cash crops, fight erosion and add organic matter to their farm fields. With estimates predicting 20 million acres of U.S. cropland to be seeded to cover crops by 2020, the trend amounts to a significant new agronomic enterprise in many areas, even if cover crops are not considered a cash crop.

CTIC and the Sustainable Agricultural Research and Education (SARE) program began surveying farmers across the country in 2012 about their use and plans for use of cover crops. Early results show a steady increase in first-time adopters of the practice, and some interesting trends in how farmers are establishing their cover crops.

The majority of respondents to the CTIC/SARE surveys say they drill or broadcast their cover crops, leaving open the potential for equipment dealers to become suppliers of tools and services related to establishing a wide variety of seeds in an even wider variety of cropping conditions and soils. In fact, those farmers participating in the surveys openly call for more support from the ag retail sector in equipment selection, agronomic and cropping decision support, and for advice and services in efficiently terminating cover crops.

In this column in the September issue of Farm Equipment, we discussed the benefits of cover crops and provided an overview of how they fit into farm planning and some of the differences in cover crop selection based on the regions in which they are used. In this issue, we’ll examine some of the newer and more popular pieces of equipment in use to establish covers. Several of these were displayed at the 2015 Farm Progress Show.

The Multipurpose Cover Crop InterSeeder by InterSeeder Technologies is a one example of a drill designed for interseeding cover crops in standing row crops. The tool also can double as a no-till grain drill, says Corey Dillon, one of the machine’s developers at Penn State University’s Russell Larson Research and Education Center at Rock Springs, Pa. 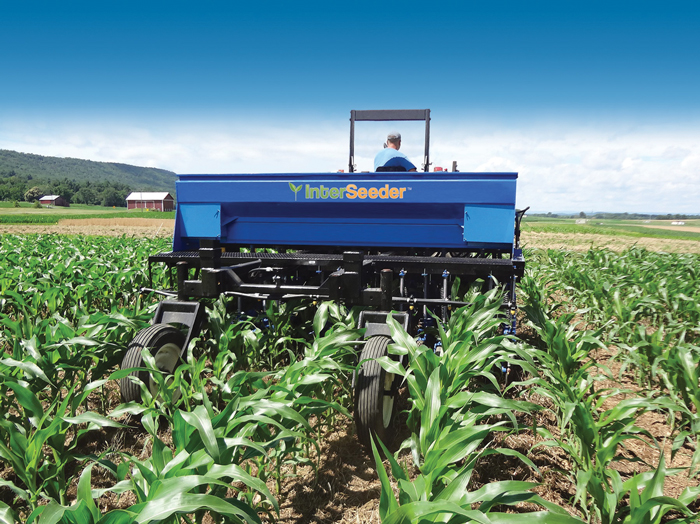 This multifunction unit was initially developed to give local no-tillers a tool to improve cover crop stands in a variety of conditions. It plants three rows of cover crop seed between rows of a standing row crop for no-till relay planting, and can spread post-emergent herbicides and apply directed fertilizer all in one pass, Dillon explains.

The design uses double-disc openers and a coulter running ahead of the row unit with a packing wheel to seal the cover crop seed in place. “This machine makes it possible for farmers to develop a soil cover year round, be environmentally responsible and improve crop yields,” he says. 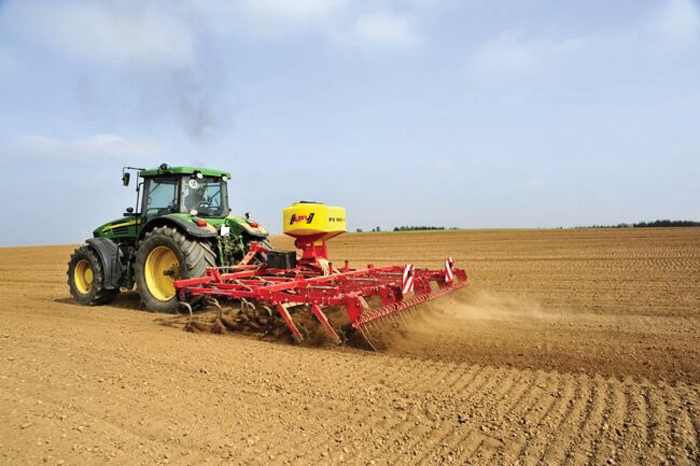 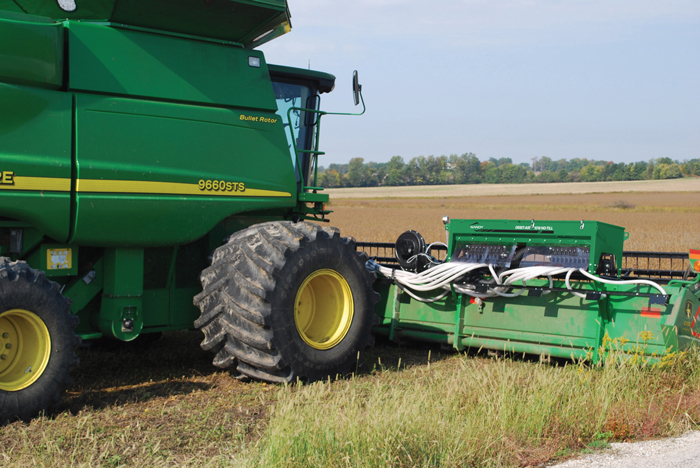 “The operator can turn each bank of 9 metering wheels on or off from the cab, and has the convenience of a run-hold system that automatically turns the metering system on when the head is lowered, and off when the head is raised,” he explains.

The Valmar 55 Series air seeder is designed to give farmers the ability to seed cover crops with existing equipment, says Gary Fennig, owner of Fennig Equipment. 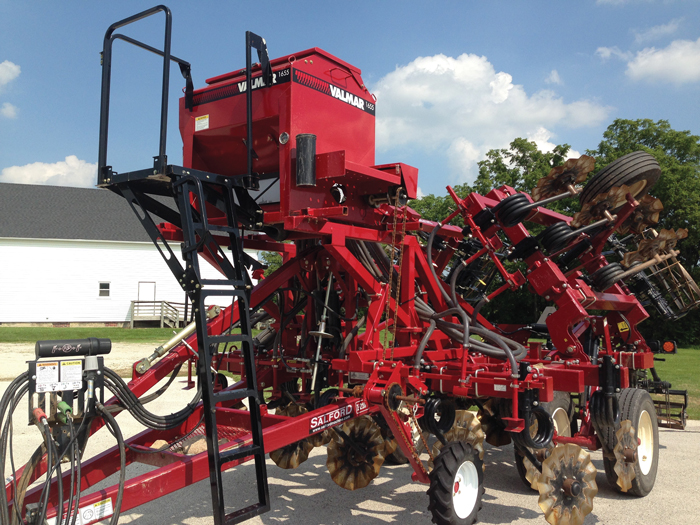 “This unit will mount on about any piece of equipment a farmer has, so he already has 90% of what it takes to put in a cover crop sitting in his farm yard,” he explains.

This unit, recently purchased by Salford Group, has hopper capacities ranging from 20-50 cubic feet. They move seed with either hydraulic fan power or a gasoline engine fan, and are geared with an in-cab-controlled 60 speed gearbox. The 55 Series can be mounted on a variety of equipment such as harrows, cultivators or on a straight tool bar, Fennig says. 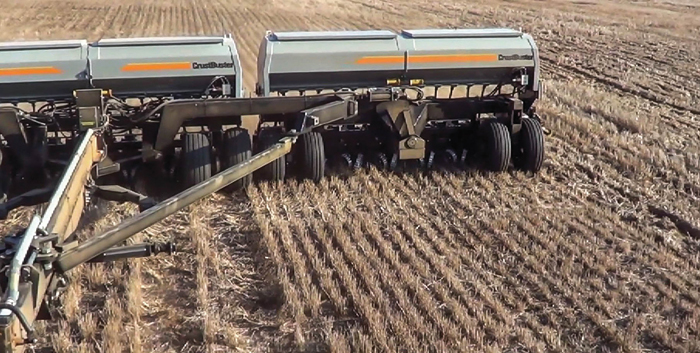 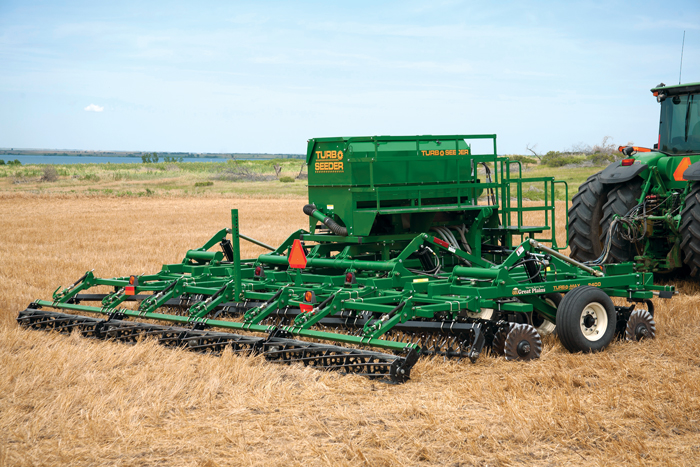 The company also makes a 3.5-bushel 12-volt model for use on pickup trucks and tractor front-mounts. The multi-function seeder is also designed to switch seamlessly from seed to fertilizer application.

The Canola Special Drill from CrustBuster/Speedking is designed to plant canola in a variety of soil and moisture conditions in fields ranging from clean-till to heavy residue no-till. Throughout its development, however, it’s been shown to handle a wide variety of seed sizes found in cover crops. 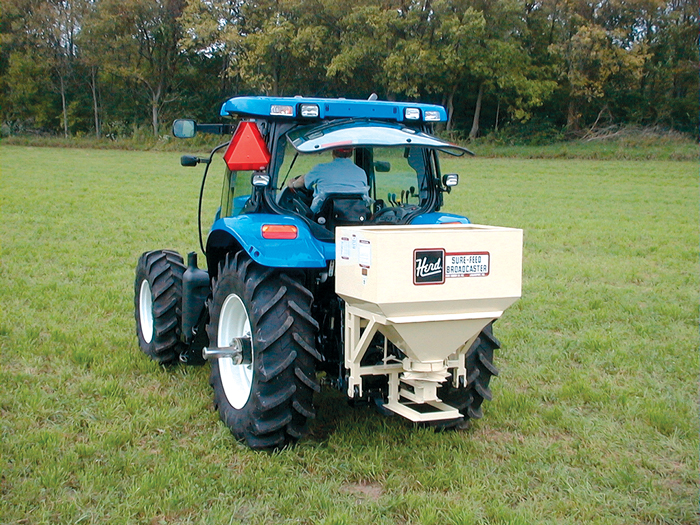 The new drill is available in 30, 40 and 45 foot widths with 7.5 and 10 inch spacing. Floating trash whippers are available on every other row in both spacing configurations. It utilizes the company’s parallel linkage opener for depth control and the adjustable, all seed, all-metal precision Wobble Slot metering system.

Produced in partnership with Gandy Co., Great Plain’s Turbo-Seeder provides a method for seeding cover crops on the company’s Turbo-Max vertical tillage tool. Together, the machines provide for vertical tillage, residue sizing and cover crop planting in one pass.

According to the company, it is an easy-to-install attachment featuring a 36 bushel hopper, 24 outlets and a split shaft controlled by two separate clutches. The meter shaft is powered by a 12-volt, 25-amp motor. An 8 gpm hydraulically-driven fan delivers the seed to the diffusers.

Roll, Crimp, Plant All in One Trip 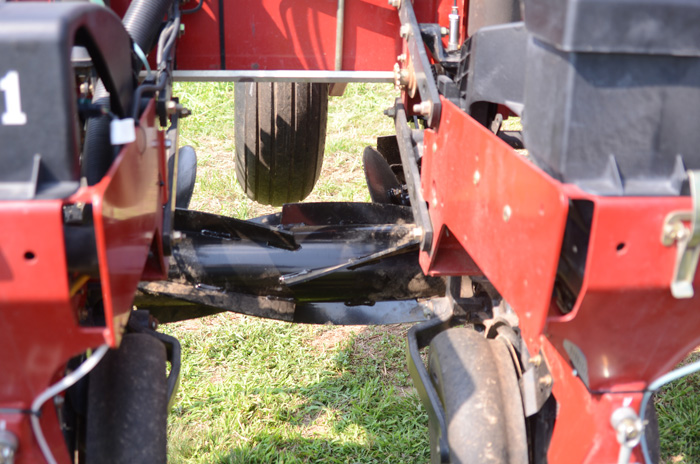 Getting all of the benefits of cover crops right up until planting corn or soybeans is possible with a new roller/crimper and row cleaner unit from Dawn Equipment. Plus, it eliminates one costly trip across the field for growers.

Delaying the cover crop kill as long as possible in the spring can lead to better weed control, extra fertilizer benefits, drier planting conditions and other benefits, Charles Martin told attendees at the mid-summer field day sponsored by the Pennsylvania No-Till Alliance in Elizabethtown, Pa.

Over 5 years, the Loysville, Pa., no-tiller refined the concept and Dawn secured the manufacturing rights for what they call the ZRX Electro-Hydraulic roller, crimper and row cleaner unit.

“We started using the roller/crimper in the spring prior to no-tilling corn and soybeans,” he says. “Then we got bolder and let the cover crop grow as much as knee high before we rolled it. When the following crop got off to a quicker start in areas where the tractor tracks knocked the cover crop material down, we decided to mount the unit on the planter.”

Offering parallel linkage for each row, the unit can conform to ground contours for more effective rolling, plant termination and flexing over rocks while rolling down cover crops, corn stalks or small grain residue. The roller gauges the depth of the double disk row cleaner while hydraulic down pressure transfers needed weight from the frame.

Blades on a helical-shaped roller pull cover crop material away from the cleaned row area. The crimped material is tucked into a thick mat between the rows, which results in killing the cover crop.

Martin says the key is having a two-step process where the row cleaner and roller work effectively together. Instead of simply pushing a big mat of cover crop material down and trying to plant through it, the unit leaves an ideal cleaned row area.

Dawn has also introduced its DuoSeed cover crop interseeder that’s designed to seed cover crops following the emergence of row-crops such as corn or soybeans. The unit features a heavy duty free farm linkage support system, seed depth is quickly adjusted and the unit can also be used to sidedress nitrogen.