It's All in the Execution

The discipline to ‘execute’ good ideas is an area that leaders must achieve expert status — quickly. 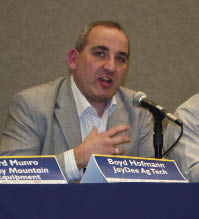 While each of the speakers at the Dealership Minds Summit provided food-for-thought, Boyd Hofmann’s presentation reinforced that the best ideas in the world won’t work without the right processes and systems and follow-up mechanisms.

Hofmann is vice president and general sales manager of JayDee Ag Tech, 9-store John Deere dealer group based in Saskatchewan that is focused on the large producer business. Its structure includes 3 regional sales managers and 21 ag territory managers, along with a support staff of 5 that is dedicated to settlements and sales assistance.

Hofmann relies heavily on a peer group of Deere dealer-principals in Western Canada that meets twice a year. “We set benchmarks, challenge each other and share numbers — everything from total revenue to net income to bottom line to equity positions.”

As students of the industry, the JayDee team feels its has a good handle on the minimally accepted levels and also the benchmarks that must be reached for a dealer to be considered in the top 10-15% in North America.

Hofmann explains that virtually everything that can be measured will be at JayDee — not only for the total dealership group but also drilled down to the individual department (parts, service, etc.) and for division (ag, turf, etc.). “We manage a lot of numbers, from total expenses to total gross margin to net operating return on assets, to owner’s equity, to absorption and market share, with minimum and model goals attached to each. As an ownership group, we throw a lot of numbers around on the table as we challenge each other to try to get there.”

The image to the right shows JayDee’s view of the minimal acceptable ratios achievable by the top 10-15% in the industry. “We run lean. We know a recession will come to ag again. And if you aren’t running lean when it does,” he said to the dealers attending, “some of us will be exiting the business.”

As shown, JayDee’s benchmarks include a minimum gross margin on 7% of ag sales and $400,000 gross margin per salesman. “We track what it costs us to have those guys on the road, what we pay in commission and base salary, and we can’t afford to pay more than about 27% of the gross margin on a deal. If we do, there won’t be enough left for the owners, for facilities and for the tools they need to do their jobs.”

Used inventory, Hofmann says, is a little different. “We talk about used turns, but the big factor we look at is the percent of the used equipment per total new and used sales. So we’re striving to get to at least 10% at the end of the year. So if you sell $200 million worth of product, we don’t have any more than $20 million worth of used inventory at year end. Everybody knows cash is tied up in used inventory. So while turn is important, we’re trying to get that factor to less than 10%.

“Our sales staff complains once in a while because there isn’t enough stuff on the lots — not when combines and 4-wheel drives are worth $300,000- $400,000 — but it also gives them an opportunity to go out and get more deals.”

Additionally, JayDee’s detailed reporting also includes a gross margin spreadsheet on every single brand sold (including minimum levels) as well as unit and sales goals for each of the 9 stores’ area of responsibility.

The concept of the minimum levels is that salespeople need not seek additional approval; to set a benchmark in which everyone’s “good to go.”

JayDee’s growth structure is predicated on empowering the sales managers to make all decisions necessary, including on-the-go spending, hiring/firing and customer issues. “We sometimes have 20 combines tied up just for loaner situations, but if we run out and they need to go buy a combine, we’d expect them to do it. They’ve got the checkbook.”

Each sales area also has leeway when it comes to “gaining” growth. “So they have the parameters to know exactly where they can go to without needing approval from senior management,” says Hofmann.

Through trust, use of technology and a detailed reporting system, regional sales managers are actually managing their business units rather than spending their day on tasks that others are empowered to do.

At the end of the month, monthly financials are reviewed with the entire JayDee senior management team, with regional sales manager meetings held at least quarterly. “We’ll do a mid-season review as well as to see where we’re at with our budgets, our benchmarks and our performance metrics,” says Hofmann, noting it’s usually a 2-day format that will concentrate on making sure things are on track for year-end.

The full sales team also sees year-end and mid-season reviews that cover performance on total sales, total gross margin and where each salesman is relative to the others. “We create a little competition that way,” says Hofmann. “We feel it’s important to make sure we get the numbers in their faces. If we don’t have something to measure and aren’t constantly looking at it month after month, then you’re just chasing a dream.”

It's All a Matter of Managing the Changes

Customer Trust: What It's All About