How To Sell: 'After' the Harvest Still Counts

“A corn farmer looks at every dollar,” says Bruce Middleton, a sales and marketing associate with Kanequip in Garden City, Kan.

And that means considering what is left in the field after the harvest. For example, in recent years, uses for baled corn stalks, sometimes called corn stover, have increased significantly.

While traditionally used for bedding, corn stalks and stover also have wide use as beef and dairy cattle feed, raw material for cellulosic ethanol production and even for use as temporary sound barriers.

“There is actually an incredible market for corn stalks in our area,” says Tom Olin of Longs Peak Equipment near Longmont, Colo., a dealer of Alloway Standard equipment. “It’s a market that has kind of exploded in our area in the last five years. We are starting to see a lot more large dairy operations come in.”

In drought years, dealers like Olin, have seen a growing demand for stalks as supplemental feed. With the addition of distillers grain (a by-product of corn ethanol production) corn stalks are a very suitable feed source for cattle.

“The corn stalk market has really increased as ethanol production has created a good supply of distillers grain,” says Al Childers, a field marketer with Fairbanks International, a dealership in Kearney, Neb., that carries Hiniker equipment as one of its shortlines. “That combination makes a really good, palatable ration.”

This has been particularly helpful in drought stricken areas of the country where traditional feed sources are in short supply.

“We just don’t have anything out there to feed,” says Middleton, whose dealership represents Loftness equipment, including its windrow-shredders. “The higher priced alfalfa is being sold to the dairies, so these crops have been a lifesaver. With beef producers being able to feed corn stalks and distillers grain, it is a whole new ballgame in the cattle feeding industry.”

With the demand for corn stalks high and only getting higher, the need for equipment to harvest the stalks is also growing.

Windrow-shredders, sometimes called flail shredders, are implements that cut, shred and windrow corn stalks and stover. While these implements have been in the market for many years, improved market conditions have made them even more popular more recently.

• Keep them in stock. These implements are often a last minute purchase. You can’t sell what you don’t have. It is worth the investment to have several models on your lot.

• Be ready to do the math. The decision to purchase these machines more often than not comes down to the numbers. Be prepared to discuss fertilizer costs and corn stalk prices in order to show the customer the payoff.

• This is a growing market. Drought conditions and large commercial dairies in many parts of the country are driving demand for forage. The demand for this equipment has been increasing and is expected only to grow. If you are getting inquiries, it is worth looking into.

• Know the equipment. A strong knowledge of features and benefits, especially if there is a dealer selling competitive equipment in your area, can make or break the sale.

Traditionally, this equipment was promoted and sold as a residue management tool. But dealers are now seeing the advantage of promoting these implements as a way to either create incremental revenue from existing farmland or to save the farmer time and expense by reducing excessive residue.

The price for corn stalks varies quite a bit depending on your region, but some areas are seeing corn stalks bring in up to $125 a ton.

Even at half that price, baling and selling corn stalks can be very lucrative.

“Most times, all you have to do with a customer is sit down and do the math,” says Merle Luther, Luther Equipment, a Hiniker dealer in Greely, Colo. “These implements sort of sell themselves.”

But you also need to remember that removing all or most of the corn stalk also has a price for the farmer. Not as much of the organic matter is being incorporated back into the soil and these nutrients will need to be replaced with commercial fertilizers. So when figuring out the pay-off for this equipment, you cannot forget to incorporate this aspect into your equation.

Target customers for windrow-shredders fall into one of two categories: custom harvesters or farmers with at least 400 acres of corn stalk to bale. “It is hard to justify the cost of the implement and the wear and tear on your baler on anything less than 400 acres,” says Tom Olin of Longs Peak Equipment, Longmont, Colo. (Photo courtesy of Alloway Standard)

Also, the need for farmers to manage their crop residues hasn’t gone away. If anything it has increased.

“Most farmers don’t have any more land available and the seed companies have maxed out yield on the corn plant, so there is only one way to increase production and that is to plant more plants per acre,” says Middleton.

With the increase in availability of distillers grain, the nutritional value and palatability of corn stalks has improved significantly.

A study at the Univ. of Nebraska has shown that a distillers grain-corn stalk ration resulted in comparable weight gain in heifers, at a fraction of the cost.

The study focused on feeding distillers grain-corn stalk ration with added minerals and urea as compared to a conventional alfalfa, corn silage, corn and supplement ration fed to heifers weighing 450 and 850 pounds.

Researchers fed the following ration mix to the 850 pound heifers to achieve average daily gain of 1.8 pounds a day (all feeds are expressed on a 100% dry matter basis): 5.6 pounds of distillers grain, 12.3 pounds of corn stalks, 0.05 pounds of limestone, 0.04 pounds of trace mineral salt, 0.14 pounds of urea, and 0.01 pounds of vitamin ADE premix.

But what about the increased crop residue?

“Somewhere you have to be able to get rid of some of that,” says Middleton. “You can till some of it in, but you can’t keep putting all of it back in year after year. It is not going to deteriorate.”

This need to manage growing crop residue is a very good opportunity for custom harvesters, and many dealers cater mostly to that customer base with windrow-shredders.

“A lot of the custom guys are going out and doing the custom shredding and baling and selling it to dairies for bedding and supplemental feed,” says Luther. “It is just easier for the farmer because you’re taking off about 75% of the residue, so they don’t have to work the ground as much to reincorporate it.”

Custom harvesters not only save the farmer time, hassle and money, they also take on the burden of wear and tear on equipment. Corn stalks are extremely hard on both the shredder and baler. There is quite a bit of upkeep needed on shredders from year-to-year. 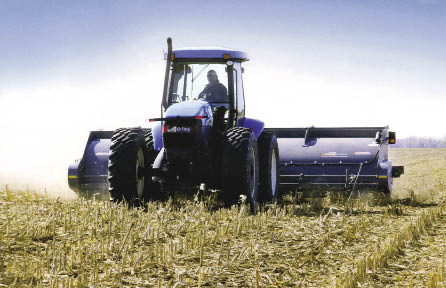 Demonstrating equipment is particularly helpful if you are trying to sell a customer a new make of windrow-shredder. If you don’t have the exact model a customer is looking for, take him to visit with an existing customer who does have it where he can watch the equipment at work. (Photo courtesy of Loftness)

Custom harvesters save money for the farmer by getting rid of the material for them. And save them time because they don’t have to disc the ground two or three times to reincorporate the residue. The custom operator benefits by selling the bales to his sources.

But some farmers aren’t comfortable leaving this task in the hands of the custom guys.

“In our area, if we wait for the custom harvesters, we run the risk of losing this portion of the crop,” says Olin. “They may be two snow storms away. But farmers harvesting their own stalks maintain more control.”

The typical customer for this type of equipment falls into one of two categories: custom harvesters or farmers with at least 400 acres of corn stalk to bale.

“It is hard to justify the cost of the implement and the wear and tear on your baler on anything less than 400 acres,” says Olin.

“We mainly target farmers with livestock or small feed lot operations,” says Childers. “They are mainly looking for extra feed for their animals and this is one way to get it from their own ground.”

While the concept of windrow-shredders is familiar and an accepted farming practice throughout most of the country, this equipment doesn’t necessarily walk off the lot without any effort.

While removing and selling corn stalks can be a significant revenue stream for farmers, it does come at a cost. Removing large portions of corn stalk means you need to replace that nutrient value in the soil with commercial fertilizer.

Corn stalks have an estimated nitrogen content of 22 pounds per ton of dry matter, eight pounds of phosphate and 32 pounds of potash. Suppose the following crop requires 50% of these amounts be added back as additional fertilizer (that is, the amount over and above what would be applied if all of the stover was left on the field) and these nutrients must be purchased as commercial fertilizer.

Let’s assume you were quoted the following prices for fertilizer: nitrogen $0.46 per pound, phosphate at $0.48 per pound and potash at $0.22 per pound. These prices are for bulk fertilizer, picked up at the fertilizer plant.

There are several manufacturers of these implements that make this equipment, each with unique features and benefits, and with each accomplishing the task of shredding and windrowing the stalks.

The sales process for these implements is typically part of an on-going discussion that dealers have with their customers all year long.

“We talk about them all year long. It is part of the program — corn planters in the spring, combine for harvest season, then it’s, ‘What are you going to do with your corn stalks?’” says Middleton.

Word-of-mouth is a powerful tool in most areas as well. “The majority of what we sell is by word-of-mouth,” he says. “People are happy with them, and they talk them up.”

Keeping them in stock is another important aspect of selling windrow-shredders.

“A lot of our customers are coming in at the last minute,” says Childers. “They realize they don’t have enough feed to go through the winter with their livestock and the cost of buying cornstalks or other feed is just too high.”

So capturing this sale really means you have to have some inventory on your lot.

“Once we started selling quite a few of these through the years, we found that it was best to keep a good supply on hand. It takes a little cash to do that, but it is worth the investment.”

“You pretty much have to have something sitting on the lot,” says Olin. “I have always had a problem with trying to test drive a brochure.”

Demonstrating equipment is particularly helpful if you are trying to sell a customer a new make of windrow-shredder.

“If I don’t have the exact model a customer is looking for, often times I will take him to visit with an existing customer and watch the equipment at work and give them a chance to visit,” says Olin. “This type of testimonial has been a powerful sales tool for us.”

How To Sell: Leveling Systems Increase Harvest Productivity on Sidehills

How to Sell: Efficiency in the Field Fuels Quick ROI

How To Sell: Making a Case for the New Corn Heads