The Effects of the Summer Drought

For the last several days I’ve been speaking with U.S. and Canadian farm equipment dealers looking for input on a project we’re working on for early next year. Inevitably, our conversations turn to “How’s your business looking?”

Depending on the part of the country where the dealer is located, his or her responses can differ somewhat, but it’s clear that the drought has caught everyone’s attention.

While many are comparing the current situation to the drought of 1988, according to USDA’s Economic Research Service, “The 2012 drought in the U.S. is more extensive than any drought since the 1950s. A striking aspect of the drought is how rapidly it has increased in severity in early July, which is a critical time for crop development.”

The chart below shows the growth in severe or greater drought between mid-June and mid-July. Its severity essentially doubled in a month’s time.

An Indiana dealer probably put it best when he said, “We’re all burned up down here.” When I asked if his customers we’re in a panic, he said, “No, but they’re in a bad mood.” 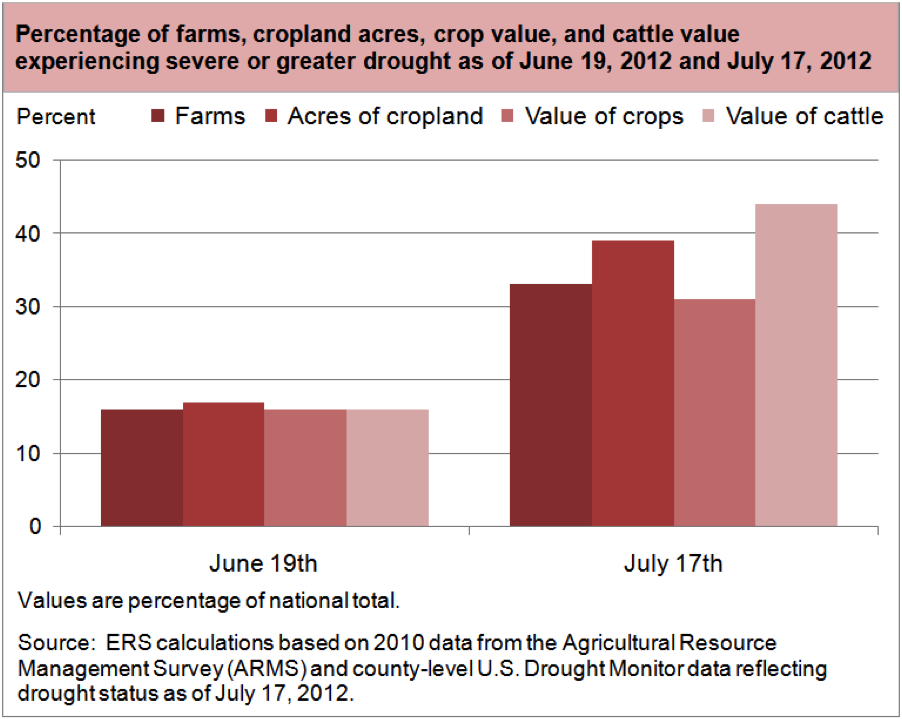 On the other hand, he added, “I think those with crop insurance should be OK.” As far as how it will affect his business, he says he’ll have to wait and see.

Industry observers are split as to what impact they see the lack of rain will have on equipment sales going forward.

Henry Kirn, machinery analyst for UBS Investment Research, remains adamant that ag equipment sales will continue to be strong into the second half of the year and into 2013. “Corn, soybean and wheat prices remain well above historical averages,” he says. “While USDA forecasts 2012 farm cash net income to be down 6.5% year-over-year, 2012 is still forecast as the second highest farm income year on record, behind only 2011. We see strong income as likely to lead to strong equipment demand in 2012 and solid demand in 2013.”

Another analyst we work with, Ann Duignan of JP Morgan, downgraded the stock of Deere & Co., largely on the deteriorating farmer sentiment she’s seeing.

“Overall farmer sentiment is deteriorating. While mathematically cash receipts continue to rise on higher prices, farmer sentiment is driven by both prices and volumes,” Duignan says. “While it is hard to quantify ‘sentiment,’ we have spoken with a number of our farmer contacts in the Midwest and what is different this cycle is: the drought is extraordinarily broad based (>80% impacted); and farmers have been spending at an elevated level for 4-5 years, implying that they can hold off on spending for a season in order to rebuild confidence and cash.”

Like our Indiana dealer says, “we’ll have to wait and see” what happens. But if there were ever a case for crop insurance, this year would be it. But we should brace ourselves for the next “blame-game” scenario: being made the scapegoat for higher food prices due to the lack of livestock and crop as a result of the drought.

Editor's Video Blog: The Effects of the Summer Drought

Using Precision Products to Mitigate the Impacts of Drought

[Podcast] How Will Continued Drought in the Southwest Impact Hay Prices and Equipment Sales?