Read Bros. Ambulance to the Rescue

A converted ambulance serves as a roving service truck for this

The new Read Bros. facility in Henry, Ill., is a state-of-the-art building that includes an exhibit room that can hold up to 200 people for meetings and clinics, an extensive and well organized parts department and a 200 foot x 120 foot shop — that could fit all the shops at the dealerships previous four locations. The Case IH dealership is impressive to say the least, but the biggest surprise can be found on the shop floor or driving somewhere in the Read Bros. 60-mile service area — a 1995 4700 Navistar ambulance that has been redesigned and outfitted as a service truck for the dealership. 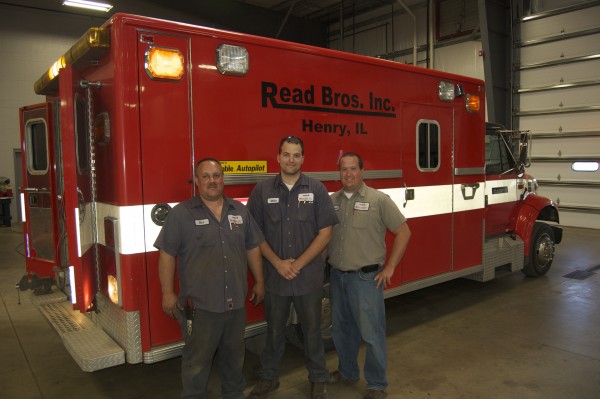 Read Bros. bought the ambulance about six years ago after owner Bob Read approached Rod Rumbold, a service technician, with the idea. “Bob decided and one day asked me, ‘What about an ambulance?’ I said OK, it would be a good idea to put the parts in and we set up the ambulance and one crane truck to serve as roving parts service trucks,” Rumbold explains.

Read Bros. purchased the ambulance from Foster Coach Inc. in Sterling, Ill. Foster Coach builds new ambulances as well sells used ones. Rumbold spent about three days working in the evenings converting the ambulance to a service truck. He built a workbench in the back out of scrap lumber, ran air lines for air hoses and added a water tank so technicians could mix up antifreeze and wash their hands. They also needed to switch out the colored emergency lights to yellow lights.

“The reason we really bought it was the storage,” Rumbold says. “That was the biggest thing.”

Rumbold says the parts inventory in the ambulance consists mostly of belts, fuel filters and wear parts and supplies. Having a large inventory on hand means that if Rumbold notices another issue when he’s servicing a tractor, belts that might need replacing, for instance, he doesn’t have to make another trip with the parts. He has it in the truck and can take care of it right then and there. This is a service that the farmers definitely appreciate, he says. Rumbold does mostly tractor repairs, and says most of his calls can be taken care of without a crane, so the ambulance works out great for him.

In addition to the storage opportunities the ambulance offered, Rumbold says it was also the most economical option. He says it was much cheaper than a traditional service truck. Read Bros. spent approximately $20,000 on the ambulance — compared to the $30-40k it would have cost for a traditional truck — and put about $1,500 into converting it to a service vehicle, Rumbold says. 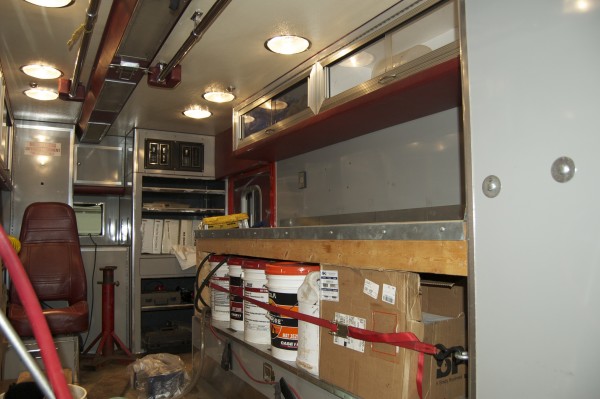 In addition to the ambulance, Read Bros. has five other service trucks as well as 2 crane trucks.  Joel Anderson, service manager for the dealership, says one advantage to the ambulance is using the white lights on the side of it to light the scene. “It’s nice for road work because it helps with safety when you’re along the side of the road,” he says.

Adds Rumbold, “The lighting was really an added bonus. You really feel better that people will see you when you’re working on a tractor on a dark road.”

Another added bonus is the vehicle is fully air conditioned and heated. Rumbold says this is great for the extreme summer or extreme winter weather. Instead of working on the tailgate, he can go inside and use the workbench and be comfortable regardless of the weather.

Farmers have had a positive reaction to the converted ambulance as well. “First off, they want to make sure they’re not having a heart attack,” jokes Rumbold, “but then most are pretty impressed by the storage.”