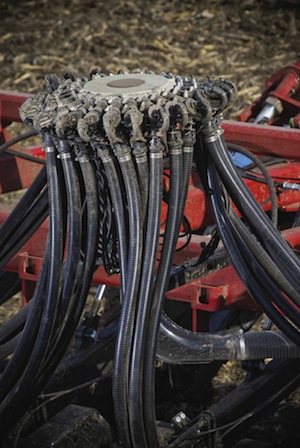 Using acoustic sensors installed in-line at the manifold, the system listens to seed and fertilizer flowing through the planter as it bounces off a small stainless steel membrane similar to a stethoscope. These sound pulses are converted into digital signals and transmitted wirelessly to an Apple iPad mounted in the cab of the tractor. IAS’s iPad app then displays a graphical representation of the system, instantly alerting the operator to any blockages.

A benefit of the Wireless Blockage Monitor is its ability to detect blockages anywhere in the seeder. Most air drills rely on optical sensors that watch the seed as it flows through the system. This method often cannot detect a blockage until seed has piled up in front of the sensor, sometimes minutes after the initial blockage has occurred.

Instead of relying on a purpose-built display, IAS’s use of the iPad gives a flexible platform that can be used in and out of the tractor. Operators cannot only watch their seeder, they can also use other applications such as checking commodity prices and weather.

The Wireless Blockage Monitor can be installed on a large range of air seeders, both current and past models.