Research and dealer experience demonstrate the advantages of wide swathing tools and techniques.

Conventional wisdom leads many haylage producers to believe that the more you manhandle freshly cut hay, the faster it will be ready to chop. But researchers and farmers are finding that haylage will be ready for harvest sooner and preserve more of its nutrients when it’s cut and simply laid in a wide swath.

Research at Cornell Univ. and the Univ. of Wisconsin shows that by uniformly laying freshly cut hay behind the mower, the plant material is exposed to more sunlight. That encourages faster photosynthesis and translocation from photosynthesis and allows more airflow over the material for faster dry down to reach moisture levels needed for safe haylage harvest.

Wide-swath mowers simply cut the hay and lay it behind the mower to maximize its exposure to drying elements. “The units don’t crimp, mangle or condition the stems,” says Glenn Beidler, Freeburg, Pa. He operates a farm equipment dealership that serves a 5-county area. His customers are primarily looking to maximize the digestibility of their forages, and Beidler says wide-swath mowing can help them do it. “It takes some thinking about mowing, conditioning and drying to fully understand how hay changes after it’s cut but before it is harvested,” he says.

“We’re asking farmers to identify what they’re doing now and what problems or challenges they have. They often report they’re most concerned about uneven or lumpy conditioned hay that doesn’t dry well,” says Beidler. “Then they look at hay cut in a wide swath and see it has more exposure to the sun. It’s the most overlooked factor in making hay.”

He adds, “We’re cutting a living plant and when you run it through a conditioner, you think you’re squeezing the stems and plants so they dry faster, but this doesn’t use the plant’s natural respiration to move moisture out of the hay. Then dumping it into a narrow windrow further minimizes sun exposure at this critical time in the drying process.”

Beidler compares haylage that hasn’t been conditioned to a cut flower in a vase. “The plant continues to respire, quickly releasing moisture through the plant’s stomates. Wide swathing allows the sun to hit as much of the hay as possible so respiration continues to pull moisture out of the plant, resulting in faster dry-down.

“With conditioning, you crush the plant,” he says. “The first 30% of the drying can be done through photosynthesis and translocation, so for haylage, mowing in a wide swath will get it to the needed moisture content,” Beidler says. 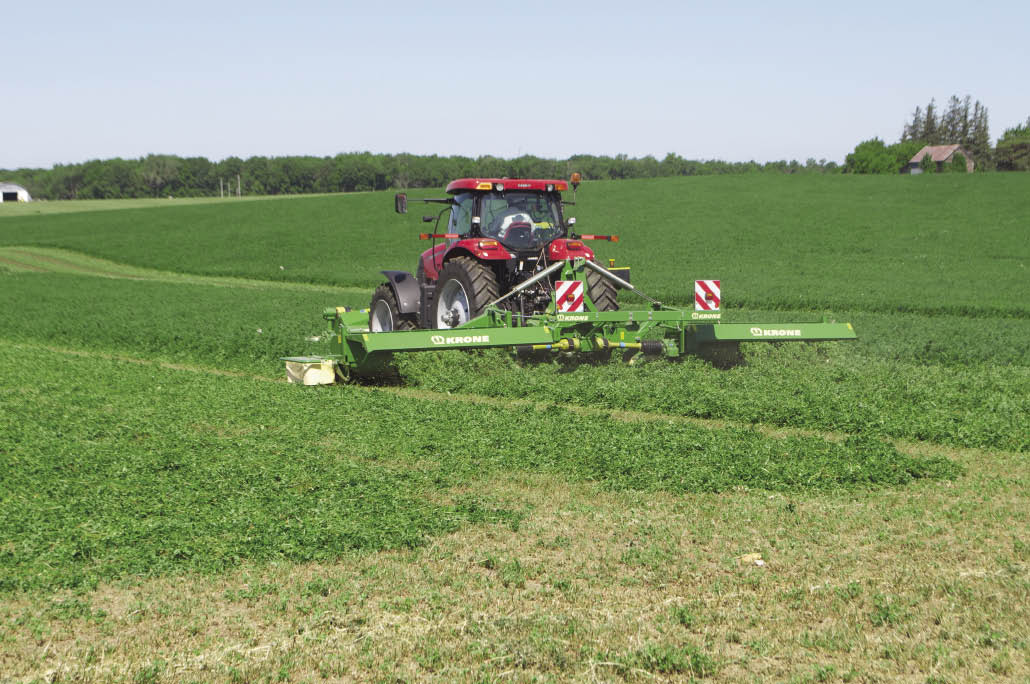 “Wide swath mowing is a new opportunity to sell equipment and gives the farmer much greater return on investment on equipment,” says Beidler.

“Once the customer is committed to the idea, they can make it work. Typically, a wide swath mower is two-thirds the cost of a mower conditioner and since it can be pulled with a smaller tractor and do more per pass, fuel costs can drop as much as 50%. My customers are seeing a relative increase in feed quality and digestibility and this gives them a higher feed value. That matches up with research,” Beidler says.

“With wide swaths, we’re using the sun instead of energy from fuel to get the crop ready for harvest. It results in a lower initial investment and requires less fuel. The real clincher is reduced dry matter loss, which you can’t see but it definitely is there,” he adds.

Beidler says the minute a plant is cut and removed from its roots or food source, it begins to degrade. The faster that plant reaches the desired moisture content, the less dry matter is lost and the haylage has a higher total digestible nutrient (TDN) level.

“It’s a process you really can’t see, so sometimes it’s a hard sell. As an equipment dealer, we’re more used to selling metal than a specific cropping practice. To convince a farmer to do something different takes a change in thinking,” says Beidler.

How Wide is Wide?

“Research shows wide-swathing forages can result in faster drying and higher forage quality. The faster you get the forage to the moisture content needed for storage, the more nutrients you’ll preserve. In fact, we don’t think conditioning is necessary for producing haylage. A wide swath — one that is 70% or more of the cutterbar width — can reduce moisture content to 65% in as little as 10 hours. Our tests at the Univ. of Wisconsin-Arlington test site show that conditioned hay in a narrow swath can take 28 hours to reach 65% moisture content,” he says.

However, Tom Kilcer reports that he and Dr. Jerry Cherney at Cornell Univ. take a more conservative view on swath width for making same-day haylage. “We feel that a swath that is no less than 85% of cutter bar width is critical for same-day haylage. Yes, you can do it with a narrower swath, but each reduction in swath width increases the drying time,” he says.

“Until the moisture is reduced to levels where respiration ceases in the plant, the hay will continue to consume starches and sugars, key components to the hay’s nutritional value and digestibility,” reports Undersander.

In addition to improving the hay’s palatability and nutritional value, a wide swath system can reduce fuel, equipment and labor costs over conventional haying and conditioning practices.

“Typically, wide-swath mowers have lower horsepower requirements than a mower conditioner,” says Beidler. Although the wider swath may dry down more quickly, it still needs to be windrowed.

“Windrowing is a challenge because farmers need to bring together two or more swaths to feed high-capacity choppers. It needs to be completed in a cost-efficient manner and in a way that makes it uniform and able to be harvested without pulling debris and dirt into the windrow,” Beidler says.

Even in wide swaths, tedders can play a vital role in getting the grass hay ready for baling or chopping, adds Beidler. “If you use a mower conditioner, a tedder will help place the crop across the cutting width so you use the total cutting width for faster drying.”

Tedders can advance the drying process in wide swaths or windrows. “I think tedders are one of the most underused pieces of haying equipment. They can be used in many ways, especially if drying conditions aren’t good or if the hay gets rained on,” Beidler adds.

“A tedder lets you spread out the hay so you can use the whole field to capture sunlight for faster drying. A mower conditioner will take a swath from 10 feet to 4 feet, then a tedder can spread it back out to 10 feet. While no tedder will make it as smooth as a wide swath, it will help take advantage of the drying forces,” says Beidler.

However, Undersander points out that tedding alfalfa can greatly increase leaf loss and decrease forage quality. “But they’re great tools for grass hay,” he says.

Wide-swath mowers also have a place in grass hay, where producers are finding they can help them beat the time game. The case can also be made for these wider mowers because new units can knock down nearly as much hay in one pass as two separate units and save time, labor and fuel to boot.

For example, Burton Ouzts, owner of Athens Tractor & Implement in Athens, Texas, points out that his dealership carries the Vermeer TM1400 wide-swath mower that is capable of cutting an 18-foot swath, which, he says, is 5 feet wider than most other trailed mowers.

“Farmers are more interested in getting over the hay crop as fast as possible, so the wider implements make sense to them, but they need a unit that folds so it can easily travel down the road and fit through farm gates. This unit folds to 8 feet 6 inches for transport. Farmers think a unit this size can only be used in large fields, but it is easy to use even in 10 acre or even smaller fields,” says Ouzts.

“It matches the productivity of two 80-horsepower tractors pulling 10-foot mowers. It’s not half the cost because you do need a slightly larger tractor, but you’re operating and maintaining only one implement, not two. The larger tractor takes more fuel, but less than two smaller tractors, and one less operator,” Ouzts says.