In the last two weeks since UAW John Deere workers went on strike after rejecting a labor agreement, the strike has shown no signs of slowing down. To gauge industry sentiment regarding the situation, a recent Farm Equipment poll asked dealers if they support the strike or not. 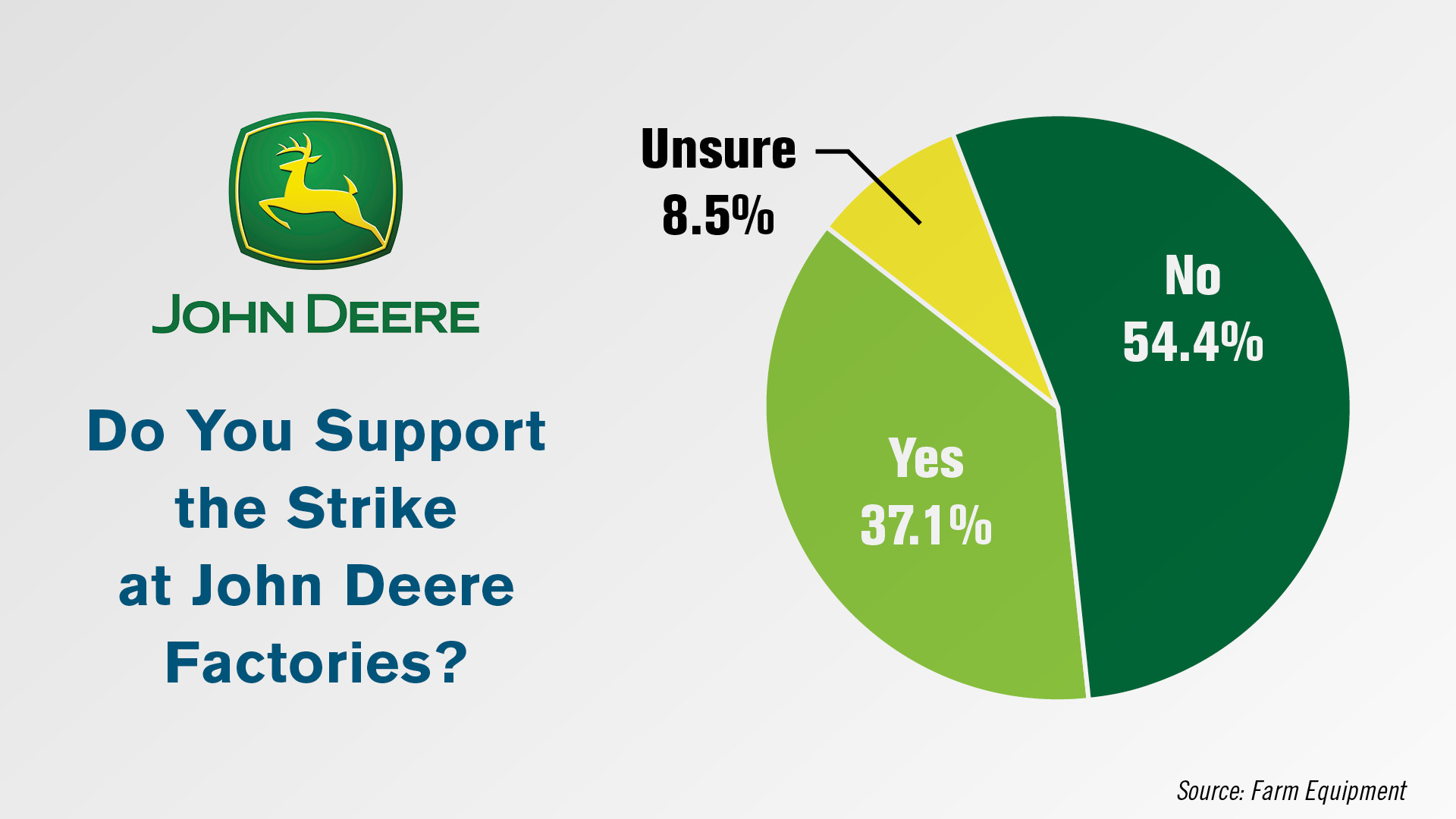 Roughly 54% of dealers indicated they do not support the strike, while 37% said they did and 8.5% weren’t sure.

Commentary from dealers who do not support the strike suggested Deere’s record profits don’t necessarily mean employees should see raises. One dealer said, “When every business is struggling to find good employees, a strike is the kind of thing that holds a company back from progressing. Just because the employees see their company having large profits isn't a green light for the rank-and-file to get big raises. Employees have to understand that healthy profits for a company means more growth and expansion. It means the company has funds to put into R&D, advertising, product development, etc."

"As far as cuts to new hires, that goes on in every business with pension plans or retirement plans. With people living longer, that means more retired former employees are drawing from the pension plan. The union leaders are doing the rank-and-file no favors if they don't get the employees back to work. John Deere has great resources. If they need to move these jobs offshore to keep the company afloat, then they may have to do that. Then, Mr. Union Boss, where will your people be: on the unemployment line?"

Some stated the UAW was taking advantage of the pandemic as leverage, with one John Deere dealership employee stating, “While a pay raise may be justified, I believe they are taking advantage of the current ‘worker shortage’ and pinning Deere down when they have no other option. I believe this will set a precedent in many industries and further exacerbate the product shortages.”

"John Deere is in the business of making money," said another John Deere dealership employee. "Profits are used to improve benefits for employees and research and development for new and improved products. I'm sure the unions are not going to be willing to take a reduction in pay when there are years of downturn. They want the protection of their wages and benefits. I have 2 children that work for unions, so I see the benefits. But I feel they drive up the cost and prices, which just gets passed on to the end user."

Still others mentioned that Deere employees are paid at a higher rate than union employees at their competitors’ plants and suggested dealers that support the strike are likely not Deere dealers.

Dealers that do support the strike accused Deere of prioritizing its shareholders, with one dealer saying, “Deere needs to recognize the true value of the people that have made the company a success, whether it be factory workers or dealership employees. It seems to me the senior management at Deere are only interested in shareholder value and have completely forgot about what it is that has made the company successful.”

Another dealer who supports the strike said, “Take some of your record profits that you (Deere) have been trumpeting for the last year and invest back into your employees that make you who you are. And hurry every chance you get. Your dealers would like to sell parts.”

One former John Deere employee had the following to say about what they called an "increasing divide" they saw in the company. "I retired from John Deere after 31 years," they say. "During my tenure, I witnessed as they continued to increase the divide from director level and above vs. everyone else. The logic was these individuals make all the business decisions. If you are fortunate enough to become a Senior VP at John Deere, you will no doubt retire with over $10 million. The company is very well run but is only sharing their financial success with the top management."

Another dealer claimed Deere has become too dominant in the industry, saying, "John Deere has become too dominant and aggressive in the agriculture sector. $6 billion in profits that mostly came from farmers. They are more concerned about shareholders (Bill Gates and others) that are large landowners of agriculture land. That said, the strike will warn the overall ag industry."

Some surveyed dealers found fault in both side with their comments, with one saying, "They had over 2 months to settle this before the strike occurred. UAW and John Deere need better resolution teams. The customers are the ones that end up paying the price."

Another dealer added, "Without all the facts, it is hard to make a decision. Corporations have to worry about pensions breaking them in the future, so I get where Deere is coming from there. Record profits should be shared by those who do the work, so I get the unions' rejection too. Tough for customers who have to pay during a strike! Not fair to them."

In a recent interview, former Case IH Vice President of North America Jim Walker offered some insights on the strike and said,

“I think the entire UAW is looking at the Deere strike and negotiations to set the tone for future contracts with them by all manufacturers. Considering the profitability of Deere, back order of pre-sold product and intense atmosphere the production workers have been working on during COVID, I think the Deere initial offer was a bit paltry. Much more will need to be offered to satisfy both UAW Deere as well as UAW in general.”

Click here to see a timeline of the strike since negotiations began in August.

Poll: Do You Support the Strike at John Deere Factories?