Ethanol usage, which helped fuel the ag equipment sales boom from 2005-2013, has flattened out, but exports continue to prop up its overall production. Nonetheless, the fight to maintain and grow its place in the fuels market has been frustrating.

According to the National Corn Growers Assn., about 30% of all U.S. corn is used for ethanol fuel. When combined with its produc­tion byproduct, Distiller Dried Grains with Solubles (DDGS), that figure rises to nearly 40%. So, it’s no wonder why corn growers and ethanol producers are bat­tling with Big Oil to maintain and grow ethanol production.

But the political frustrations Ethanol usage, which helped fuel the ag equipment sales boom from 2005-2013, has flattened out, but exports continue to prop up its overall production. Nonetheless, the fight to maintain and grow its place in the fuels market has been frustrating.

According to the U.S. Energy Information Administration, U.S. fuel ethanol production capacity continues to increase. Fuel ethanol production capacity in the United States reached more than 16 billion gallons per year, or 1.06 million barrels per day (b/d), at the beginning of 2018, EIA said in its most recent U.S. Fuel Ethanol Plant Production Capacity report. Total capacity of operable ethanol plants increased by 5% — more than 700 million gallons per year — between January 2017 and January 2018.

Of the top 13 fuel ethanol-pro­ducing states, 12 are located in the Midwest. The top three states — Iowa, Nebraska and Illinois — contain more than half of the nation’s total ethanol production capacity. 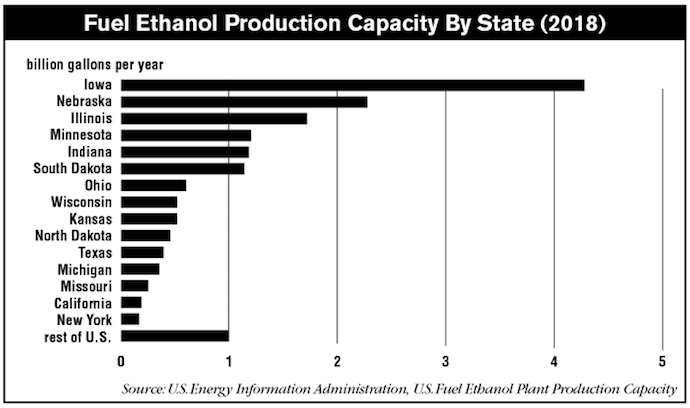 Exports to the Rescue

While domestic use of ethanol has pla­teaued, exports continue to increase. According to the Renewable Fuels Assn., government data shows that U.S. ethanol exports through June stood at 927.7 million gallons (mg), up 33% from the first half of 2017 and on pace to shatter last year’s record of 1.38 bil­lion gallons (bg). RFA says that robust export markets are more important now than ever before, as actions by the Environmental Protection Agency (EPA) are “undermin­ing domestic ethanol demand.”

Ironically, the U.S.’ main com­petitor in ethanol production, Brazil, is also its leading market for exports. No doubt, at least part of the growth in exports is a result of low corn prices, which makes ethanol more competitive in world markets.

Canada has been the sec­ond-leading export market, with 159.5 million gallons of U.S. ethanol ending up there through the first 6 months of the year, which is up 8% from the same period a year ago. Other top markets for the first half of 2018 were India (70.1 mg), China (52.9 mg), South Korea (44.5 mg) and the Philippines (43.7 mg). It should be noted that nearly all of the exports to China occurred in the first 3 months of the year, and fuel ethanol exports to the coun­try collapsed to zero in the second quarter as a result of increased tariffs. 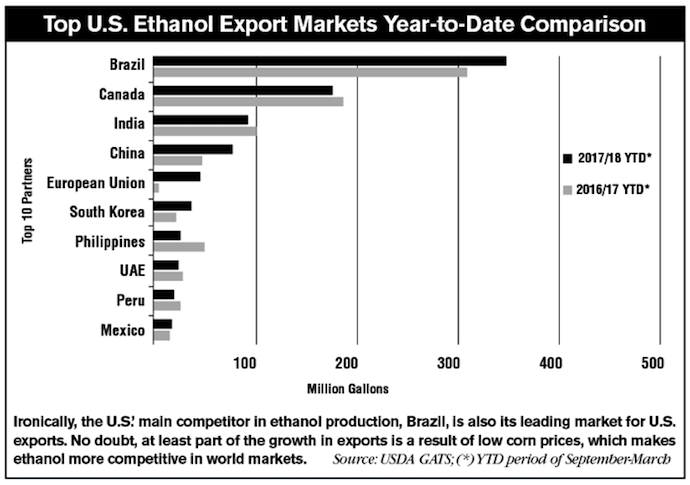