High levels of domestic corn-based ethanol production are projected to continue over the next decade, with about 36 percent of total corn use projected to go to ethanol production if current laws remain in effect and specific assumptions about macroeconomic and international conditions, weather, and government policies hold. However, gains are expected to be smaller than have occurred in recent years. The projected slower expansion reflects only moderate near-term growth in overall U.S. gasoline consumption followed by declines later in the decade, limited potential for further market penetration of ethanol into the E10 (10-percent ethanol blend) market, constraints in the E15 (15-percent ethanol blend) market, and the small size of the E85 (85-percent ethanol blend) market.  This chart is found in USDA Agricultural Projections to 2021, OCE-2012-1, February 2012. 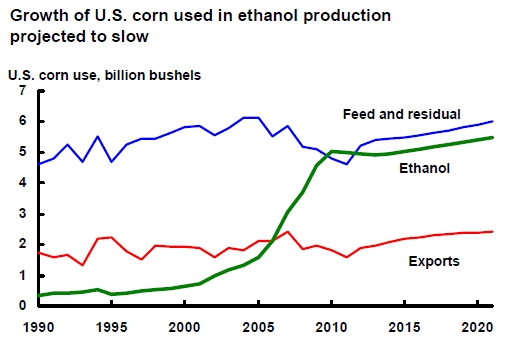 After a Decade of Rapid Growth, Corn Use for Ethanol Projected to Decline