George Annen of Annen’s Machinery Ranch in Arlington, Wis., reflects on the digital transition that shaped his career, sharing the benefits, pitfalls and lessons learned trading used equipment in the modern age.

There was once a simpler time in the career of George Annen, a used equipment specialist and owner of Annen’s Machinery Ranch, Inc. in Arlington, Wis. A typical day before the internet started with a freshly-brewed pot of coffee, a trip to the convenience store to process tractor photos taken on a film camera, mailing them overnight to a set of interested buyers and preparing for a sales trip the next day if the phone rings.

The premise of Annen’s business remains the same today: buying, selling and trading equipment six days per week, linking buyers and sellers together with used machinery deals in primarily Midwestern states. But that trip to the convenience store has since shifted to instant photos via smartphone, an online sales post, and hundreds more potential buyers receiving all the information they need in a matter of 15 minutes. Swap a pile of letters with a laundry list of emails, and the rest of the day is often spent tracking equipment shipments and scouting new leads across four different auctioning platforms. The fresh pot of coffee can often seem like the one constant in Annen’s routine.

Today’s scene may seem simpler for Annen until realizing that thousands of sellers, some used equipment specialists like him and others just farmers looking to transition machinery, are flooding the market on many of the same platforms. Factor in the rise of scammers hiding behind the screens selling damaged machines or stolen information, and the globalized nature of the modern industry can hinder more than it helps.

“I’m 60 years old and on the downhill side of this,” Annen says with a smile as he sips from his mug and scans over two auctions at once. “It’s not like I want to wish my life away by any means, but I’m kind of glad I’m on the downhill because it’s a tough business.”

While the internet flipped the script on finding leads, establishing trust with buyers and managing his operation as a whole, Annen adapted to the drastic changes required to stay afloat in the business. In finding the motivation to do so, he beckons back his father’s advice, whose business Annen would eventually acquire over the course of a career spanning four decades and counting: “You only get once chance to make a first impression. I gave you a name and you only get to use it once. Once that name is tarnished, you can’t polish it back.”

Annen’s operation consists of himself and two employees: one responsible for cleaning and detailing equipment and one that drives the trucks. Having the unique advantage of sharing a parking lot with Johnson Sales, a Case IH, Yamaha and Chevrolet dealer, the two businesses utilize each other’s strengths to succeed. Annen manages the majority of Johnson Sales’ trucking responsibilities in exchange for performing any major reconditioning and repair projects on Annen’s equipment.

“I’ve been called a jockey and I’ve been called a scalper. That terminology has been around forever and I don’t mind it. The biggest thing is when you drive into my lot and see used machinery, the last thing you want to see as a customer is a lot of junk around…”

Annen’s previous facility was located roughly 8 miles south of the current location, but when a district decision came down to annex part of his property into a village, he was forced to relocate. Looking to stay in the area, Annen utilized his previously existing relationship with Johnson Sales and moved next door into a smaller facility in 2011. Between the networking and intent to downsize anyway as he embraces the “back-nine” of his career, Annen says the move worked out perfectly for everyone involved.

“Everybody asks us how we get along with Johnson Sales and it’s been a great relationship,” Annen says. “Why does a McDonald’s build next to a Hardee’s? It all works hand-in-hand.”

With Johnson’s primary focus being new equipment and car sales, Annen says the unrelated focus of each business is complementary and prevents conflicts of interest.

“We network back and forth with clientele and inventory,” Annen says. “If I have something that they can make fit to their customer, they can resell it or else they’ll just give me the lead. With inventory, I let them sell their own stuff. I have no desire to be involved with new equipment.”

The dawn of the modern internet brought seismic shifts to every sales career, and the used equipment industry was no exception for Annen and his colleagues. Annen says he could talk all day about the pros and cons of real-time accessibility and auctioning platforms, but to boil it down, he calls it “bittersweet”.

More than anything else, Annen says the internet has blurred the lines between retail and wholesale, taking what was once the niche of used equipment specialists into a realm of seemingly endless options for machines and regions. 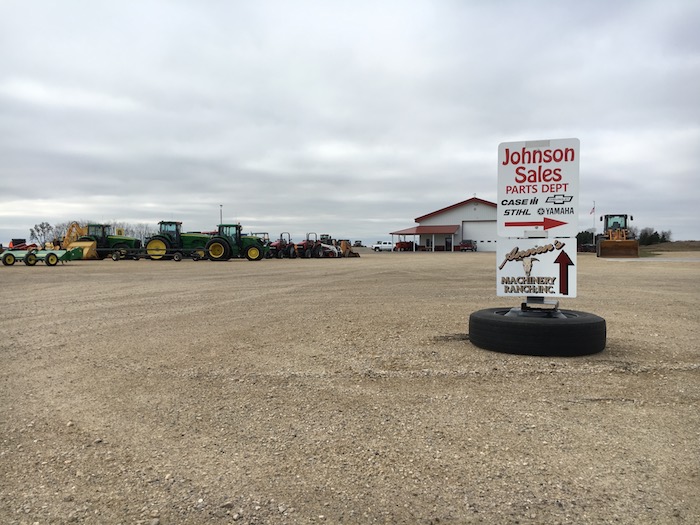 With two businesses sharing the lot, Annen manages the majority of trucking for Johnson Sales in exchange for major reconditioning and repair projects on Annen’s machines.

“There used to be a huge difference between wholesale and retail before the internet. Guys like us were the internet,” Annen says. “Years ago I would take a trip to Illinois to pick up John Deere tractors, haul them back here, and then wholesale them to other Deere dealers up here.”

The rise of online sales has made Annen’s job far more stationary by nature. Between consigning online purchases and verifying certain machines through trusted contacts, Annen estimates he hits the road for about 35,000 miles each year today, compared to upward of 75,000 miles per year before the internet. Many of the contacts he networked with before the internet still actively work with him, but a lot of the relationships he’s since built stretch across the country.

“In the old days, you could sell to somebody, deliver it 50 miles away, collect the check and everything was simple,” Annen says. “Nowadays, the most difficult part of the job is often centered around the logistics of getting machinery from ‘point A’ to ‘point B.’”

As for the online auctions, which make up a large percentage of Annen’s daily routine today, he typically participates through the primary platforms of AuctionTime, IronConnect and TractorHouse. He says a typical session will last between 60-90 minutes, although some of the larger online events can span between 5-7 hours. The layout of the platforms makes it manageable for Annen to track up to 4 auctions at once across the multiple screens in his office.

“If you know what you’re looking for and have faith in the internet auction you’re attending, you can save a lot of time and money in travel expense and motel rooms,” he says. “But the biggest concern about the internet today is you’ve got to know where you’re buying it from, and if you don’t know who it is, do your homework.”