Revisiting An Equipment Dealer’s Weathering of Hurricane Katrina ... The ‘Storm’ After the Storm

Editor’s Note: The following article originally appeared as a sidebar article in within a larger article, “After the Storm, Louisiana Dealer Moves Ahead,” March 2008 edition of Farm Equipment. Following the effects of the August 2017 Hurricane Harvey in Texas, our staff wanted to share this article for some perspective.

No one at Chauvin Bros., Belle Chasse, La. will ever forget Hurricane Katrina. Many simply call it “The Storm.” Their term for the devastation is “The Mess.”

When Hurricane Katrina hit in August 2005, it was the costliest and 1 of the 5 deadliest hurricanes in the history of the U.S. It was the sixth-strongest Atlantic hurricane ever recorded and the third-strongest hurricane on record to make landfall on the continent.

Not the First Time Around

The New Holland dealership, founded in 1952 by Louis and Rene Chauvin, was originally located in the heart of Louisiana citrus grove country -- which for decades had the best quality citrus in the country, says Gary Chauvin, owner. At one time, the area included 15,000 producing trees on 80 acres of this 90-mile long, 4-mile wide peninsula. About 30 years ago, says Chauvin, nearly 75% of the parish was small citrus groves that averaged 20-25 acres each.

But orange growers continued to be bitten by Mother Nature, including Hurricane Betsy in 1965, Hurricane Camille just 4 years later. “The southern 40 miles of the parish was wiped out,” says Chauvin, recalling the effects of Betsy and Camille in that brief period. But it was the cold snap in 1985 that stayed below freezing for 5 days that obliterated the groves.

In the mid-1980s, the dealership relocated to Belle Chasse, La., to the north end of Plaquemines Parish, 50 miles north of its original location but still within view of the top of the New Orleans Superdome. That decision to move not only supported the diversification within municipal and construction markets, but also turned out to be a true blessing for what would happen in 2005 when Katrina hit. 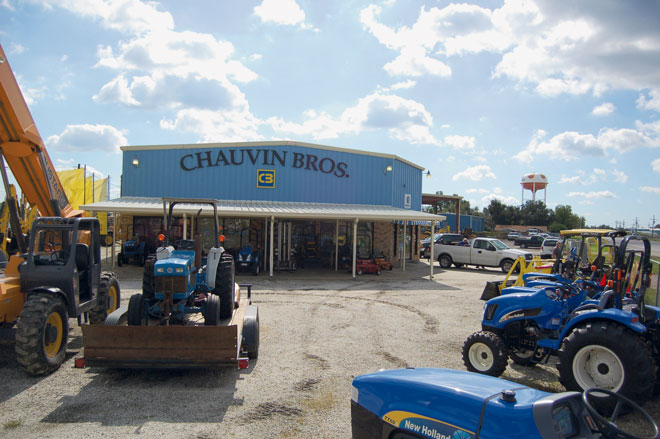 Pictured is Chauvin Brothers’ store 2 years after Katrina. The location was fortunate in that it did not flood but was heavily damaged by the 2005 storm. Following the tragedy, however, all the full-time salespeople and some service technicians, left the dealership, including some that moved away from the region entirely.

“Katrina hit us a little farther north and by then the marshland that provided a buffer against these storms was gone, eaten away by erosion and salt water intrusion,” Chauvin says.

“We didn’t have a lot of water up here,” says Randy Austin, sales and product support specialist for the New Holland dealership, in talking about Katrina. “The storm blew in all the big bay doors on the back of the store.

“It took us a while because we couldn’t find anyone to do the repairs and the ones that were doing repairs had to put you on the list. New Holland called and asked what they could do to help us.”

A week after Katrina hit, the dealership reopened, but it was difficult, at best, to get much done. Most of the dealership’s employees had left town when the storm was approaching and the phone system was completely shot.

“We had people calling our cell phones, if we could find a spot where they would work, looking for equipment to rent or buy,” Autin says. “We opened up with what we had.”

“Our owner, Gary Chauvin, plus one of our mechanics who lived across the road from the store and I were doing whatever we could to get equipment back up and running.

“Gary and I were driving the truck, delivering and picking up equipment. We all took turns to make sure customers were getting what they needed. Many customers would just wait for their machines and we did whatever we could to get them on their way to clean up their property.” 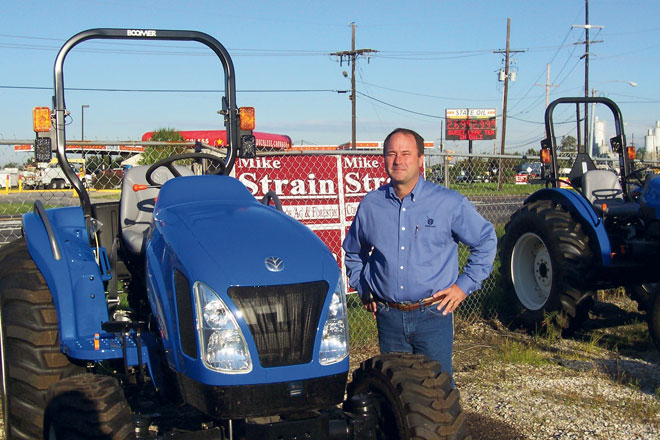 “When you lose something in a disaster, you’re optimistic but you don’t hurry up and start rebuilding or replanting again. You need to see 2 or 3 years of safety. That’s what’s happening here,” says Gary Chauvin.

Much of the equipment at the south end of the parish was a total loss, having been submerged in 30 feet of salt water for 2 weeks or longer.

“Some of the equipment that was further up, closer to where we are, was salvageable because we didn’t have a lot of water up here,” Autin says. “We only had to drain everything and change the wiring harnesses. The machines that were under salt water further down, were total losses.”

As Autin noted, New Holland, working with Chauvin Bros., donated nearly $1 million in construction equipment to Plaquemines Parish to help with the clean-up. The dealership loaned the sheriff’s department about $500,000 in clean-up equipment.

But what Autin remembers most are the customers, mostly citrus farmers, who would come by the dealership just to talk. “A lot of them were friends of Gary and Mr. Louis, old timers that needed to talk. They wanted to tell their story about what they found on their property and the devastation they saw when they returned.

“These people were not just customers but our friends and neighbors.”

Before the big hurricane, Chauvin Bros. employed three full-time outside salespeople. They all left, along with some service technicians. In large part, this is what happened to the farms as well. With many of the grove owners getting up in age, their children just aren’t interested in replanting. “The young people in these farming communities aren’t going back to the family farms and the older people are dying off,” says Chauvin. “The labor’s just not here anymore,” he says.

“When you lose something in a disaster, you’re cautiously optimistic but you don’t hurry up and start rebuilding or replanting again. You need to see 2 or 3 years of safety. That’s what’s happening here,” says Chauvin. 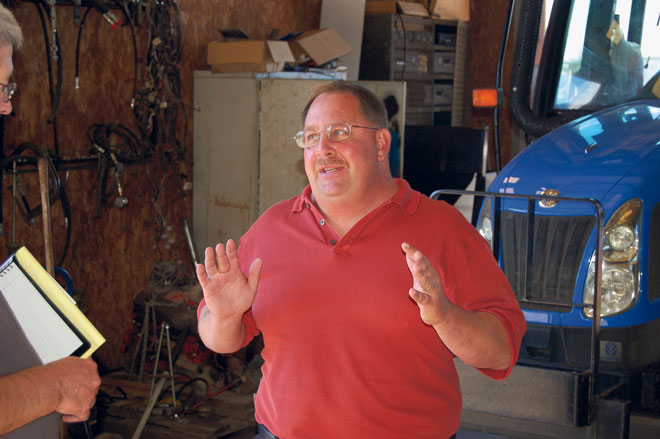 “We had people calling our cell phones, if we could find a spot where they would work, looking for equipment to rent or buy,” Randy Autin says. “We opened up with what we had.”

Prior to Katrina, the population of Plaquemines Parish stood at about 27,000. In 2008, it’s down to 12,000-15,000. “People at the southern end of the parish had to relocate for many months and they just settled in other places,” says Chauvin. “They’re tired of running.”

For all the planning and anticipating that Chauvin Bros. did to adapt to its changing customer base during the previous two decades, little could have prepared them for the breadth of changes that Hurricane Katrina brought.

“We were somewhat prepared for the loss of farming in the area,” says Chauvin, “but we weren’t expecting a Katrina.”

The real, long-lasting impact, he says, is that there’s no labor for the family farm anymore. “This is what’s killing farming here. For the citrus farmers, it wasn’t a hobby because it’s a very expensive investment with the equipment, chemicals and labor required. Most of them had other jobs even when citrus was booming.”

As a businessman, he’s been forced to look at some other business ventures. “I’ve had to spread my eggs out,” Chauvin says, “but I’m not for sale. I still love this business. We’ve been in it for 56 years and we’re aiming for another 56, hopefully with one of my three children at the helm.”

Personally, he says, “I’m going to replant some trees, not nearly as many as we had. I want that tradition to continue.”

In the Delta region of Louisiana, traditions die hard.

Memories of Katrina … What’s Next for Dealers After Hurricane Harvey?