According to Ag Equipment Intelligence’s monthly Dealer Sentiments survey, since the start of 2017, farm equipment dealers’ year-over-year level of optimism has varied by as much as 42% from one month to the next compared to the prior year (See table below). For example, in January 2016, the net percentage of dealers feeling “less optimistic” about industry business conditions was –31%. A year later in January 2017, a net +11% of dealers felt “more optimistic.”

By and large, the swings in optimism have moderated and even improved somewhat through the January-to-June period of 2016 vs. 2017. In June of last year, a net –24% of dealers were “less optimistic” vs. June of this year when a net +4% of dealers were “more optimistic.”

While the level of dealer optimism has generally improved during the past year and a half, this isn’t reflected in the actual sale of high horsepower farm tractors.

As shown in the charts below, since 2013 the January-to-June sales of row-crop tractors (100 horsepower and higher) is down by nearly one-half. Even compared to one year ago, sales of this category of tractors is down by about 12%. The same thing is true for 4WD equipment, but it’s even a little worse for the sales of those tractors.

On the other hand, dealers who emphasize sale of compact (40 horsepower and lower) and utility tractors (40-100 horsepower) have had more to be optimistic about. The compact class of tractors is up by 37% in the January-to-June sales period between 2013-17. Sales of mid-range, or utility, tractors is down by a little over 4%, but have generally held steady in the 5,000-5,300 range. 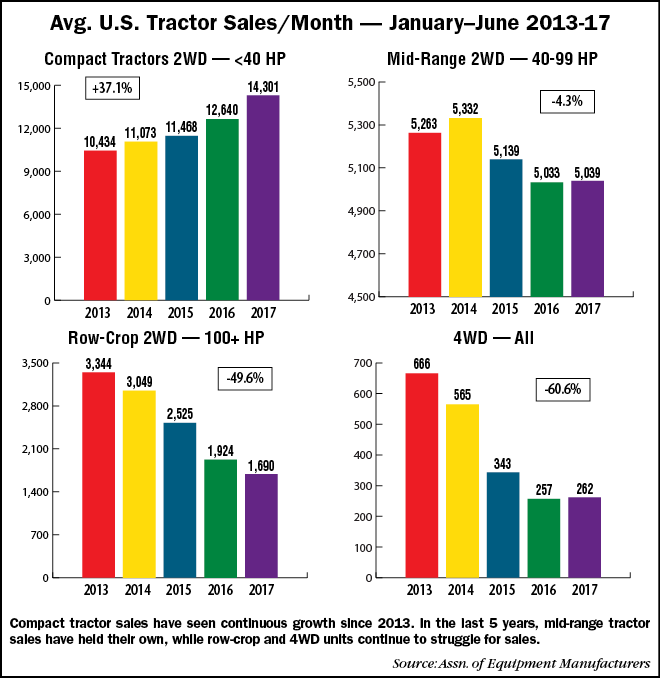