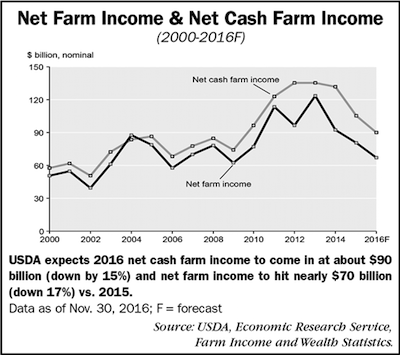 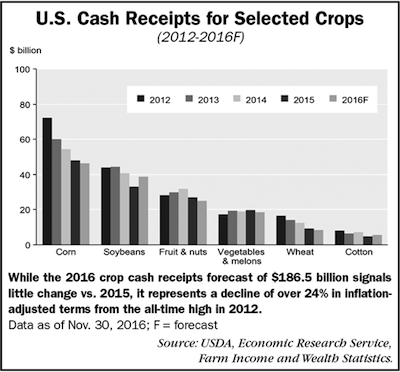 n 2016 as prices continue to decline for most field crops. The crop cash receipts forecast of $186.5 billion represents a decline of over 24% in inflation-adjusted terms from the all-time high in 2012. For corn receipts, the 2012-16 decline is forecast at about 36%, reflecting lower U.S. corn prices. Expected further weakening of corn prices in 2016 more than offset production gains, resulting in corn cash receipts to fall by almost $2 billion (4%) from 2015. Wheat receipts have also declined since peaking in 2012, and are expected to decline almost $1 billion (10%) from 2015 as price declines accompany strong harvests. Increased soybean production is expected to be complemented by higher prices in 2016, buoyed by strong export commitments and indications of higher priced, forward sales. Thus, soybean cash receipts are expected to increase over $5 billion (16%) in 2016. 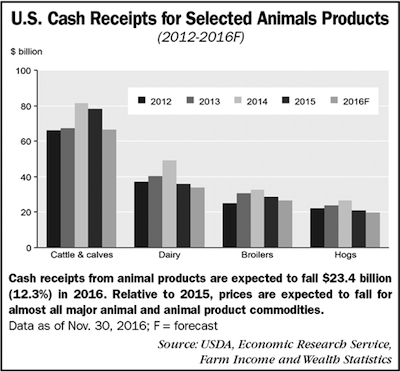 Since reaching a record high of $49.4 billion in 2014, milk receipts are forecast to drop $15.4 billion (31.2%) over 2015-16 as declining prices continue to outweigh expected increases in milk production. Cash receipts from cattle and calves are also expected to decline in 2016, falling $11.6 billion (almost 15%) from 2015. Hog production is expected to continue rising in 2016 as the industry recovers from the porcine epidemic virus (PEDV) in 2014. Hog prices are expected to drop in 2016, leading to a forecast drop in hog cash receipts of nearly 7%. On the other hand, turkeys (up $0.6 billion or 10.6%) and miscellaneous livestock (up $0.2 billion or 2.9%) are both expected to grow in 2016. Poultry and egg cash receipts are expected to fall over 18% in 2016, due primarily to a decline in egg receipts.