Along with their Gold Medal and Silver Medal award presentations, SIMA 2017, the Paris International Agribusiness Show that will be held Feb. 26 – Mar. 2, also announced several “Special Mention” awards as part of the Innovation Award program to farm equipment manufacturers who introduced new innovations in the past year. Part 2 of the awards is presented here.

Various auto-steer systems have become indispensable for farmers and farm vehicle drivers. Of these, the systems that auto-steer along the baseline (straights, curves or pivots) are well-established on the market and offered by different manufacturers. Nonetheless, line resumption at the end of a half-turn in a headland, and most importantly, the high quality of the line resumption, remains a challenge for all steering system manufacturers. 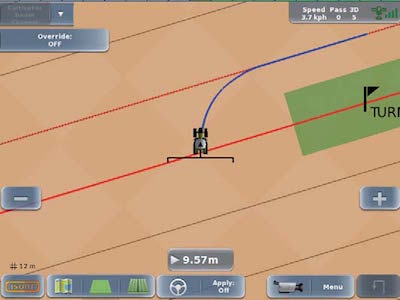 Turn In functions in two modes so as to best adapt to the customer’s use: opposite direction or machine direction, which means Turn In can offer the best possible line resumption based on the current application. So Turn In anticipates the driver’s intent but leaves him free to decide if he chooses. With Turn In, he gets optimal and even line resumption over the entire parcel and the shortest possible line resumption in the headland. This new feature also guarantees greater comfort, because it eliminates the abrupt changes in direction when auto-steer is activated.

It also guarantees quality work, because it avoids overlaps and misses on the first meters of the line, which is one of the top benefits auto-steer users seek. The system is easy to use because it’s fully integrated into the terminals and requires no special setting, except choosing the operating mode mentioned above.

The Dangreville smart spreader was designed to respond to three issues: agriculture, the environment and safety. To achieve this, the smart spreader combines five factors (remote inflation, scalable body volume, dynamic weighing, parcel mapping, load indicator) which, based on the load contained in the vehicle body, will automatically manage tire pressure and spreading. 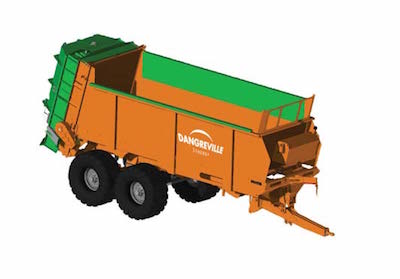 The spreader is equipped with telescopic hydraulic raising blocks and a dynamic weighing system. Raising blocks are equipped with jacks that automatically adapt the height to the load. So the body volume adjusts automatically. When the operator loads the spreader, the block risers raise up, and when the load is virtually reached, they lock and the body volume is locked in. A load indicator connected to the beacon light activates automatically when the loading threshold is reached.

This spreader is equipped with a remote inflation system that automatically adapts tire pressure to the load and forward speed. The type of tires on the spreader and the corresponding graph (speed/weight/pressure ratio) has factory settings in the software. The pressure adjusts automatically in real-time to the spreader’s weight and forward speed. Thus, a fully loaded spreader moving at 40 kph will have tires inflated to 1.9 bar, while the same spreader, after emptying in the field, will have tires pressured down to 0.8 bar. This reduces pressure on the ground via a broader contact surface, and limits compaction, minimizing ruts and respecting the soil’s structure. This also reduces tire wear and fuel consumption, and optimizes load capacity.

To improve spraying quality, a new approach is to reduce the distance between nozzle heads to 25 cm, with a ramp whose stability is strictly controlled in all circumstances. The fact of working as closely as possible to the target improves the product’s penetration into the vegetation and reduces drift.

This principle optimizes the use of 80 degree nozzle heads that generate fewer fine drops than the 110 degree, but require more working height to ensure three-fold coverage: about 90 cm for a 50 cm nozzle spacing, compared with only 50 cm for a nozzle spacing of 25 cm.

With the Leeb LT Autoselect, ramp height adjusts automatically to the nozzle head’s profile during use. This pairing between the automatic ramp height adjustment function and the automatic nozzle switching function lets you work at the ideal height for the target, for optimal application of plant disease control products, regardless of the distance between nozzle heads or the number of nozzle heads in operation. Thus, during work, you must be able to alter the distance between nozzles.

In the case of a machine equipped with two nozzle heads every 25 cm, the nozzle choice profile always starts at low speed with the activation of one nozzle head every 50 cm. With increasing speed, the nozzle profile changes and scales up to several nozzle heads every 25 cm. With the Multiselect automatic nozzle management and automatic ramp height management system, Leeb LT has the optimal droplet height over a wide range of working speeds. Each combination of nozzle heads can be configured with a ramp height dedicated to that combination, based on the features of these nozzle heads. 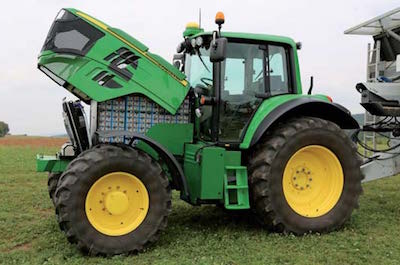 Energy stored while braking or on a descent, comfort and the overall ergonomics of its system for tracking and control are close to that of the most advanced electric road vehicles, with, in addition, multi-use power management (traction, lifting or power transfer to attached headers). The innovation lies in extending the electric drive for auxiliary units to the entire vehicle, particularly the push system, and in the power distribution delivered by the two 150 kW electric engines respectively to the traction and the other components (PTO, hydraulic pump) or in its entirety to the larger of the two consumers.

In stationary mode on the farm, the batteries’ large capacity contributes to farms’ energy autonomy and their integration into the network of renewable energy. Eventually, the entire fleet of farming equipment, tractor and attached headers, that will benefit from the transition to all-electric, with electricity generated at the farm.

The 2500 i-Plough mounted plow is designed for the simplest and safest possible use. The quest for safety means both reducing the risk of accidents while driving on roads (accidents involving third parties) and safety for the driver (accidents while raising or lowering the cab to make adjustments, which represents nearly 40% of tractor-related accidents). That is why all changes in position, from working to driving and back again, are made from the cabin. 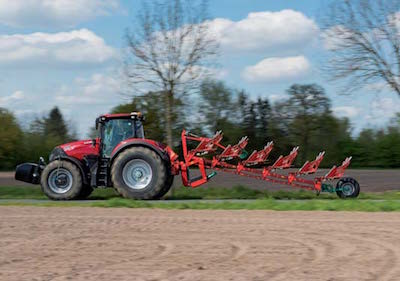 At work, all major settings can be modified via the ISOBUS terminal, from the cab. The settings can be memorized so that they are found instantly, based on plowing, parcel or tractor conditions. Coupling/uncoupling has been revised for greater simplicity and safety.

Next, driving on the road or in outlying areas is simpler and safer because the pivot point is right at the coupling hitch. So the plow follows the tractor’s wheels. This plow is equipped with a pivoting head so that the operator can unlock the pivot point for transport from the cab. Then the plow behaves like a towed trailer, with one joint on the coupling side and one load-bearing wheel (combo gauge/transport wheel outside the plow). This innovative measure prevents the “sweeping” at the back of the plow in turns and roundabouts. So the driver has peace of mind, not worrying about catching on outside elements like walls, vehicles or indeed pedestrians.

At work, this head locks automatically and it’s back to the traditional operation of a mounted plow. The operator does not have to climb down from the cab, which minimizes the risk of accidents.