SIMA 2017, the Paris International Agribusiness Show that will be held Feb. 26 – Mar. 2 has announced winners of their 2017 Innovation Awards for agricultural equipment.

Farmers looking for productivity want to conserve soil and maintain good performance when traveling on roads. With this new 2-in-1 tire, they can move from field use to road use with no compromise. At the recommended pressure on the road, only the central portion of the tread pattern is in contact with the ground.

This portion is specifically designed to target road performance (low rolling resistance and good performance). This zone is driven by the top belt that is the tread pattern. 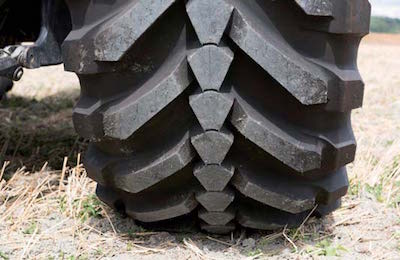 Road performance is that of a radial tire, with a pattern specially designed to ensure continuous rolling with no vibration, for greater driving comfort. “Field” pressure is one of the lowest on the market; it can go as low as 0.6 bar. At low pressure, the outside portion of the studs expands to the ground due to the “hinge” effect. This effect is provided by the new belt’s first-of-its-kind design and its combination of materials.

When the studs expand, the contact area is quite significantly increased compared with a traditional radial design. At work, sliding is limited; the surface soil being sheared is spread under all the studs, which is better for the soil. The Michelin EVOBIB tire is a breakthrough: it’s the first radial tire whose contact area expands when the pressure drops. Until now, agricultural tires have been compromises between the specific constraints of hard surfaces and agricultural soil. This is truly a “2-in-1” tire.

This system, developed in partnership with Fendt, regulates the tire pressure according to the actual load of a combine during harvesting. It adapts its footprint to stay constant. With no action needed from the driver, the tire pressure adjusts automatically to reduce soil compaction.

When the hopper is being emptied, the valve is wide open and the pressure falls to the new load pressure setpoint. This value may be half the working pressure under load, which is of sizeable interest in terms of protecting the soil. While harvesting, as the hopper is gradually filled, the compressor raises that value to the original setpoint. 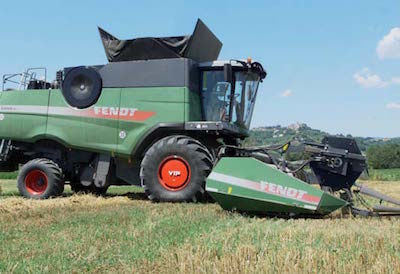 The system consists of a set of sensors measuring displacement, pressure and temperature. An electrical device controls a compressor and a valve to adjust the pressure. The compressor is mounted directly on the tire’s rim. Trelleborg appears to provide a complete solution for virtually every all-terrain vehicle manufacturer who has to resolve the management of tire-ground interface in terms of increasing traction or reducing soil compaction.

All of the components fit inside the rim. The kit is fully autonomous and free from the complex and fragile connections of compressed air and rotating joints. The upshot of this idea is the advantage of total right-left independence. Adopting such automation, VIP (Variable Inflation Pressure) may represent, in fragile conditions, an alternative to investing in a track train.