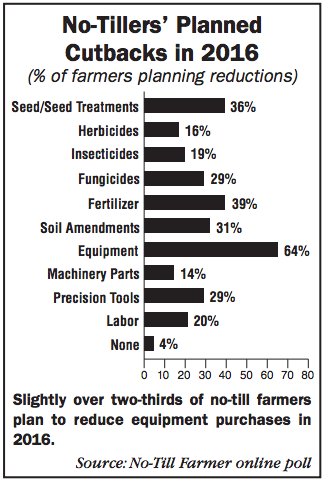 While most no-till farmers report being profitable in 2015, most are also planning to reduce spending during the 2016 growing season in an attempt to stay that way. In all likeli­hood, equipment purchases will take the biggest hit as no-tillers plan to cut back on overall spending in the year ahead.

The results of No-Till Farmer’s 8th annual No-Till Operational Benchmark Survey indicate that 67% of the 385 no-till farmers who participated in the poll were profitable last year. This compares with 81% who said they were profitable in the year prior. The percentage of no-tillers who reported losing money in 2015 vs. 2014 was up by 5%, with 16% of respondents finishing the year in the red. Those reporting a flat bottom line more than doubled in the last year to 17% of all survey participants.

The full survey results appear in the May 2016 issue of No-Till Farmer’s Conservation Tillage Guide, a sister publication of Ag Equipment Intelligence.

Last year, no-tillers estimated they spent an average $452,912 per farm, a little less than the $455,981 spent in 2014. However, this number includes the amount no-tillers are spending on both principle and interest for their loans, while in previous years only interest was tracked. Including the principle brought their overall farm expenditures up by $45,639 from 2014 levels. Excluding the loan amounts from both years, no-tillers spent significantly less in 2015 than in 2014, for an average savings of $48,708. That equates to an average of $342.96 per acre spent last year compared to the previous year’s $380.15 per acre. 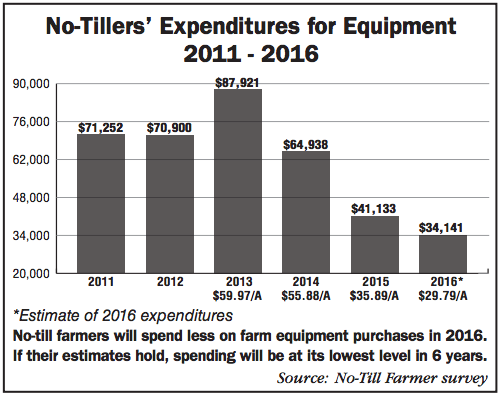 In a separate online poll on planned cutbacks in 2016 conducted by No-Till Farmer between Feb. 16 and March 15, 64% of 275 growers said they were planning to cut back on equipment purchases this year. Next on the list was reducing fertilizer, with 39% of no-tillers planning to cut back, and seed and seed treatments, as 36% of the growers say they’ll decrease spending in this area.

Typically, readers who participate in the No-Till Operational Benchmark Survey tend to be conservative in how much they predict they’ll spend for the upcoming growing season. But in 2015, no-tillers stayed under their estimated budget overall (when excluding loan payments), especially with big-ticket expenses like equipment, fertil­izer, seed/seed treatments and pesticides.

Unless market conditions change, it’s more likely they will stay within their budgets for the 2016 growing season. 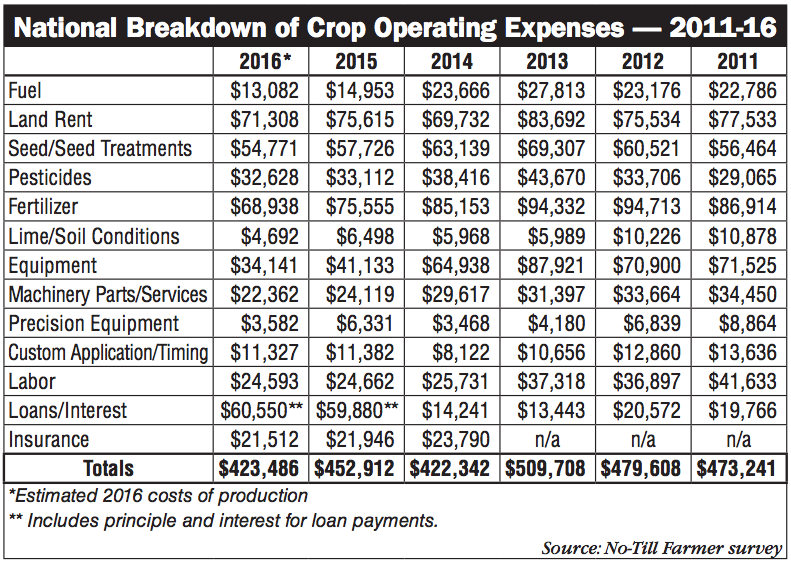