“Looking out into 2016, it’s easy to focus on the sheer amount of used equipment available,” says Greg Peterson, also known as Machinery Pete. “In addition to the used inventory on dealers’ lots, I’m also seeing a big increase in the number of machinery auctions.” The month of October saw a 48% increase in the number of machin­ery auctions vs. October ’14. The first 3 weeks of December ’15 saw a 37% jump. 2016 looks to be a much busier year for machinery auctions as well.”

Peterson is considered one of the industry’s foremost experts in used equipment pricing and trends. He told Ag Equipment Intelligence, “Despite the continuing crush of large late model used inventory sitting on dealer lots, incremen­tal improvement was seen late in 2015 and I look for this to continue through 2016.

“Tracking the used farm equipment market like I have now for over 26 years, I have never seen dealers col­lectively as aggressive as they are cur­rently in terms of trying anything and everything to work down inventory levels. So I’ve been seeing things like dealers chopping asking prices, sig­nificantly in some cases. I’ve also seen very aggressive financing options offered on late model used inventory.

“Dealers are also embracing new super targeted marketing tools as away to help move that one or two stubborn late model used items pushing $300,000 off their lot. And the cool thing is these new targeted marketing tools don’t require dealers to advertise these ‘special’ prices or offers to the whole world. Nope, just zero in and send them to select farmer demographic and geographic groups they want to entice.”

Peterson suggests that dealers view their efforts to reduced used equipment inventories as if they’re fishing. “The old school way is that you’d just cast and wait. Now you use your radar to cast only where you know the fish are. 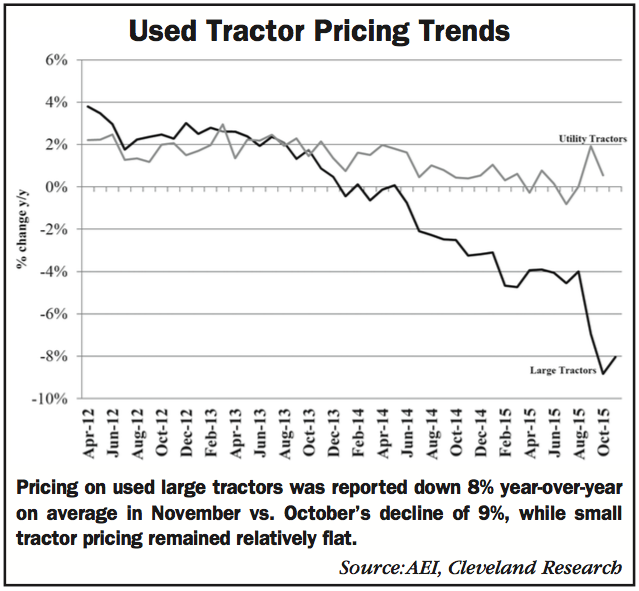 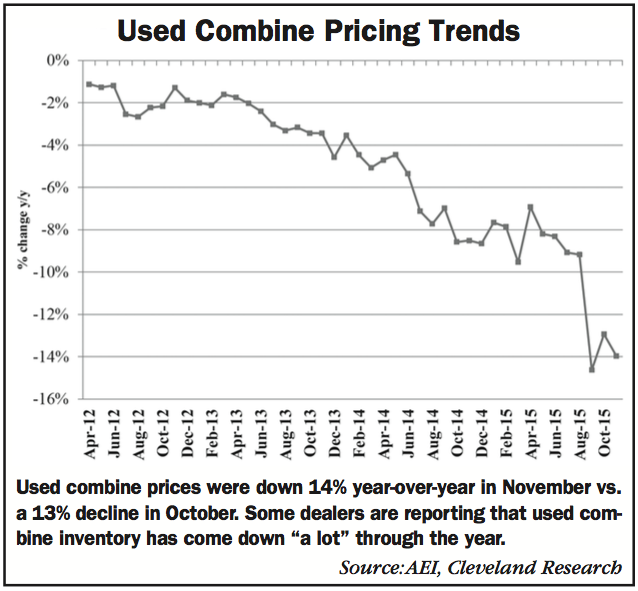 “I believe 2016 will also see further demarcation between two camps of dealers: those stuck with too much used inventory and struggling to pare it down vs. dealers better positioned without the burden of excess used inventory. These dealers, I’m beginning to see, look at and think about the used market as a big time opportunity. They are going to be aggressive buyers in 2016.

“One used equipment broker I’ve known for 20-plus years told me recently he called his lender and told him to bump out his credit line as far as it would go. He’s in a buying mood.”

At least a few farm equipment dealers who responded to Ag Equipment Intelligence’s Dealer Sentiments & Business Conditions survey in December indicated that their used machine situation was improving. One said, “Inventory is only high in used high horsepower tractors. All other segments are actually good. Used combine inventory has come down a lot through the year.”

But conditions are still generally difficult. Another dealer explained, “Used equipment isn’t turning fast enough and has caused us to do net pricing adjustments for cashflow.” And, of course, slow moving used means slow ordering of new, as one dealer said, “Unless used late model inventory is sold off, we’re going to hold off on making new sales.”