By Mike Lessiter posted on April 1, 2016 | Posted in Manufacturer News

I was out at the Wisconsin Public Service Farm Show when I heard the big news that John Deere had acquired majority ownership of self-propelled sprayer manufacturer Hagie Manufacturing, Clarion, Iowa. Hagie’s sprayers, which followed the direct-to-farmer model for most of its 70 years, will, over the next 15 months, be distributed through to Deere’s strong network. 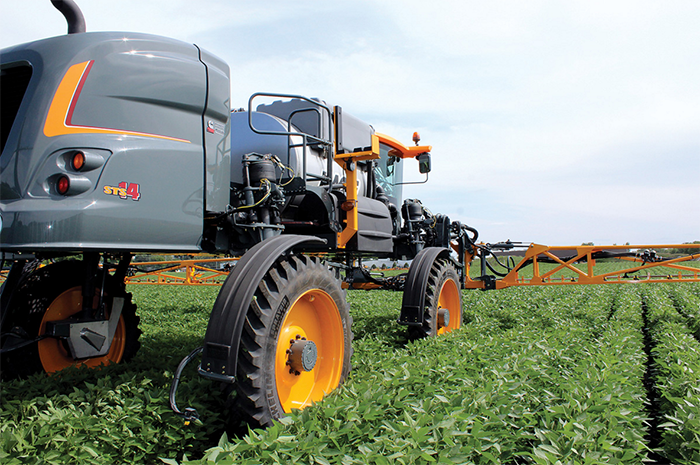 I recalled on the drive home my interview with Alan Hagie, CEO, as part of a special Farm Equipment report 2 years ago on Alternative Distribution Models. At a time when brand purity efforts were “heating up,” our editorial staff polled industry experts on the various alternative methods of equipment distribution and what they saw as the pros/cons of each model. One of the models we examined was “Direct to Farmer Sales.”

At that time, the best example of a manufacturer having success with a direct sales model on a large scale was Hagie Manufacturing. Below (in italics) is the April 2014 article featuring interview with CEO Alan Hagie about his firm and why the company chose to stake its claim on the factory-direct sales and service model.

Farm Equipment interviewed Hagie President/CEO Alan Hagie, to learn more about how the fast-growing maker of self-propelled sprayers is making its factory-direct model work - with 100% of its techs and salesmen as direct employees.

Hagie says the direct-sales approach was formed by his dad and granddad early in the company's history, with their personal insistence in being close to the customer. Each time the manufacturer dabbled with dealer distribution, he says, it struggled with the customer disconnect and inconsistent dealer support. "We stopped experimenting with dealers decades ago, and decided to perfect our direct sales approach and make it a differentiator."

The decision to go direct is a more difficult one than utilizing dealers. "To go into another area, a manufacturer can find a dealer, sign them and be in the market immediately."

For Hagie, the resources to support the model are significant. But it's the commitment to the model, says Hagie, that takes more backbone than the capital and talent investment.

Today, Hagie (which covers the geography of Colorado to Ohio and Oklahoma to Canada) has 25 in-field direct salespeople, most of whom have a demo sprayer for their territory. More important, says Hagie, are the 40 in-the-field service techs, who live in the geographies where machine populations are highest. Each tech has a $120,000 service truck and directly maintains $30,000 in parts inventory. The number of in-field techs as grown 6-fold since 2008.

Techs are in short supply to begin with, and Hagie places even higher demands on them. "The techs work in teams, but they don't see each other that often," Hagie says. "They must be self-managed. It's an awesome job for the right people, but not everyone is right for the job. They must be good with customers, know the technology and can work at a high level without someone looking over their shoulders. It's a lot of responsibility and it's the combination of those skills that makes it difficult at times."

In the last 5 years, the firm opened regional support centers that consist of a large shop, parts warehousing and a place to show the used machines. The regional manager takes some of the call pressure that previously came in to the Clarion, Iowa, call center. "The customer never needs to go to the service center," says Hagie. "The technician will always be at the farmer's door as needed."

Hagie previously tried contracting tech services with other dealers and independents, but "It was just another opportunity for something to not go well," he says.

Hagie admits that factory-direct model requires patience. "It takes a while to create the infrastructure. Not only are you building and selling the equipment, but you also need that support staff network. It's more complicated; we must learn the area, and hire sales and service staff that fit our mold. Entering a new market takes much more time than a dealer model."

But even with aggressive expansion plans (the firm has doubled in size and revenue since 2008), Hagie says the model will support new geographies. "We've reached a scale now where we can enter a new market without the short-term pressures. By the time we need a new market to perform, it's mature. This takes more foresight to do the things today that are needed for 5 years from now. I don't see it holding us back in any way. It just requires us to be more proactive."

Hagie maintains that if he was starting the business today, he'd still opt to go with the same factory-direct model. "The business is more capital-intensive today, and it might be more difficult to generate the revenue to get it going, but I'd do everything the same. We've got strong, intimate relationships with our customers. I can't imagine it any other way."

As you can see, things can change in a hurry in today’s world, though this may have been inevitable for Hagie to choose to scale to the next level. Field sales and service staff and regional centers for one line only would have required major people and capital investment.