The Key to Profitably Buying and Selling Used Equipment

“The average age of a piece of used equipment on my lot is well over 20 years old,” he says. “I have a few pieces that are about 5 years old, but I’m not the guy who makes deals with customers to trade in their 3 year old combines every other year for a low ball figure.”

“The best margins I make at Big Equipment are on taking in good, clean used equipment, upgrading it, fixing it up and reselling it,” he says. “I would have to sell a lot of new equipment to generate the same margins as I can generate on used equipment.”

When Big Equipment takes on a piece of used equipment, it is inspected, serviced and repaired until it is once again in top shape. The dealership takes in old equipment, averaging between 20-30 years old, with good quality engines and transmissions and updates the hydraulics, electronics and adds in GPS and new wiring to increase the value of the machine. In some cases, Harmon says that with a $10,000 investment in upgrades, he can get more than double the book value of certain equipment. 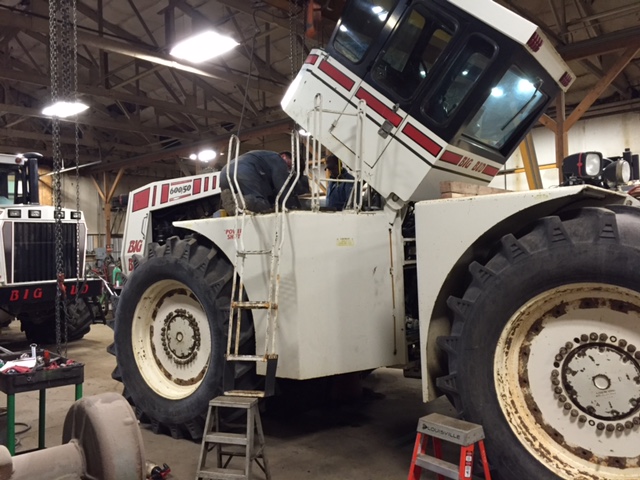 Big Equipment also offers full rebuilds of 20-30 year old equipment by request, involving a complete makeover of the engine, transmission, axels and cab. Harmon says after this work, he can sell certain models of tractors for more as a rebuilt tractor 30 years later than what it sold for new.

“These things aren’t cheap, and we don’t advertise for this business. It’s strictly word of mouth. But I prove that these tractors are just as reliable and robust 30 years later through quality rebuilds,” he says.

Not every 30 year old tractor has the same resellability, though. Harmon says it’s important to know what equipment will resell well, as this determines the amount of time and money he invests in upgrading and repairing it. There are certain brands and models of old tractors that he looks for, such as the Steiger Tiger tractors or the Big Bud tractors Harmon used to manufacture. For knowing what brands and models to target, Harmon says it’s necessary to do some research and find which tractors were originally built with high quality parts, as well as which brands and models weren’t.

More from this series >>

Furthermore, Harmon says dealers interested in this business need to know when an old piece of used equipment is in too bad of shape to bother upgrading. If you’re going to end up sticking more money into it than it will sell for, it isn’t worth the investment.

“If a customer wants to trade in an old tractor with known engine and transmission problems, I’ll still trade with him. And I may still give him more money than the average dealer would, but I go into it with my eyes open. I’m probably not going to spend the same amount of time and money rebuilding that tractor because it has too many basic problems. We have our favorite used pieces, but we are not prevented from considering other equipment. You just have to be smart about what you buy and how much money you put into it,” he explains.

Why would a customer choose an old tractor over a new one? Harmon says many of his customers appreciate the old used tractors for their simple technology.

“For example,” Harmon says, “Almost all Tier 4 engines today have DEF fluid, except for Versatile equipment. This is not only a nuisance, but it costs money. So why do engines use DEF fluid? Because many of these machines have small cubic inch engines from 11-13 liters. At Big Equipment, we use a 15-liter engine with no DEF fluid. It has regeneration, but not the DEF fluid. “I sell customers on this with the fact that with, for instance, a 19-liter motor with the torque down to 1,400 rpm, I can reduce the fuel consumption rate down by 25-30% less than most new tractors on the market. DEF engines use fuel to burn off emissions to meet emissions standard. Older, larger cubic inch, mechanical engines like those we use don’t do that,” he explains.

Once all of the tractor’s components have been checked, the electronics and hydraulics have been updated and Harmon has explained the advantages of a mechanical engine, he says it’s not a tough sell to convince customers to purchase used equipment.

“Low hour, high dollar used equipment inventory is the single biggest problem in the farm equipment industry right now,” Harmon says. “There is so much over priced used equipment sitting in dealers’ lots right now and they can’t move it. That comes home to roost when you add low commodity prices.”

Harmon says the key to Big Equipment’s success in buying and selling used equipment is that he won’t take in a farmer’s brand new machine and sell him a new one for a low price every other year. In other words, he doesn’t roll equipment.

“When we sell new equipment, we’re unwilling to take the 5-10% margin that other dealers have been doing. Our margins are consistently much higher than that,” he says.