This section is included to allow the manufacturers to offer their definition of vertical tillage and how their equipment operates and how it differs from “true” vertical tillage tools in design and practice.

Lemken USA does not classify the 3 different models of Lemken Compact Discs as vertical tillage. The Lemken equipment features low concavity notched blades always mounted on their own individual arm, not on a gang, and not 2 blades mounted to 1 arm. The 3 models available — Heliodor-18 foot, Rubin 9-24 1/2 foot, and Rubin 12-29 foot — feature notched blades. Depending on the working depth desired and how much residue the farmer wants buried, he can choose the right unit for his conditions.

VT discrepancies: We believe the discrepancies in the definition arise from manufacturers adapting existing tools to try get into the vertical tillage market (i.e. disc harrow frames fitted with low concave or straight waved blades). The original vertical tillage tools probably did fit our definition and the others where an adaptation of a disc or something else would be similar to true vertical tillage. Again, the common factor seems to be the high speed operation. The European designed compact discs are not an adaptation or an attempt to mimic vertical tillage. Compact discs were born on their own in Western Europe at about the same time vertical tillage came into prominence in the U.S. and have just recently been introduced to the U.S. market. Once more, the common aspect between these types of tillage equipment is the operating speed.

What is VT? Vertical tillage is a way to shorten (slice and dice) heavy residue left after harvesting today’s production crops. The machinery developed to do this originated from the old fashioned disc harrow. To do this, the concave disc blades were removed and replaced with straight blades. When taking away some of the angle in the frame, ground speed could be improved to plus or minus 8 mph. The basic idea is to let the weight of the machine on the straight blades slice through the residue that would do two things: 1. increase the ground speed; 2. reduce horsepower required by other ways of slicing and dicing (e.g., a stalk chopper). By going to serrated discs the slicing results were improved and by going to wavy discs there was also a bit of dirt movement added.

Amazone markets Catros equipment, which is different from U.S. manufactured vertical tillage machines. It is designed with two parallel beams where the discs are mounted. The discs are mounted in opposing angels between the first and second beam. It has an open space between each disc that reduces the chance of plugging. Since every disc is independently mounted, this allows for the installation of rubber torsion bars onto each disc arm. The weight of the machine is equally divided over each of the discs. As a result, each disc penetrates the ground at an even depth to follow any ground undulation. The discs are concave, which facilitates turning of the ground. The two rows of discs are followed by a wedge ring roller that rolls the ground.

VT discrepancies: Every manufacturer tries to build the ideal mousetrap. We believe there should be open space between each disc and an adjustment between the two rows so that when the discs are wearing down the perfect point of impact can be maintained. Other manufacturers work with the old disc harrow/gang bolt design that does not precisely follow the ground contour. There are a number of manufacturers who think that all they have to do is just cut residue to size, while others have decided to turn the ground and mix the cut residue with the soil to shorten the time of decay. In Europe farmers decided that they wanted a true one-pass seedbed preparation tool/vertical disc.

Using a concave disc design in preset angels on the two frame beams at 10-12 mph would create an end result where the residue is cut; leveling and mixing the top 2-4 inches of soil with residue is accomplished; manure or fertilizer is incorporated, depending on operating depth; and decay and germination starts immediately. The closer the harvesting machine is followed, the more moisture is available so germination and decay can start immediately.

What is VT? The Horsch Joker machine is not a vertical tillage machine. Vertical tillage has many definitions, depending on whom you talk to. In our view, vertical tillage is exactly what it says — a straight blade slicing through residue, not disturbing much in the way of soil. The residue is left on the surface, so its nitrogen, phosphorous and potassium rich organic matter may never benefit the soil. The residue doesn’t decompose much, and can be blown off of the field in many instances. 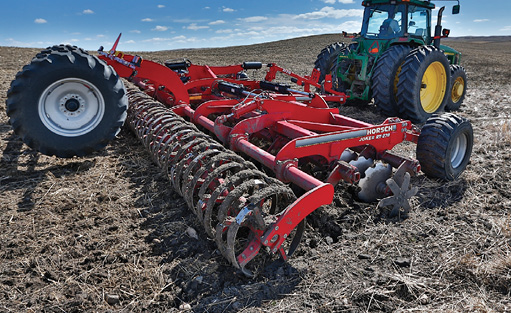 The Horsch minimum-till residue management tool is called the Joker. It is not vertical tillage, nor is it a traditional tillage tool. It features proven technology to break down residue while conserving moisture and preventing erosion. After experiencing success in other markets around the world, the technology has been redesigned specifically for the North American market. This machine offers a true residue management process, including sizing and blending with the soil; introducing oxygen and warming the soil; activating soil bacteria, which facilitates decomposition of residue; and consolidating and leveling the ground to produce an ideal seedbed. The rubber torsion system, sealed oil bath bearings and roll-flex consolidation system all provide thorough work at high speeds while reducing overall maintenance costs.

VT discrepancies: Everyone wants to jump in while there is a hot idea in the marketplace. Initially, there were many machines trying to make a play on the vertical tillage movement. After several years farmers have found that, in general, their true vertical tillage machines are not truly providing the return on investment desired. Now, it appears many of those who have preached “true vertical till” are gradually providing options that offer more aggressive blade angles. The story wouldn’t be changing if there weren’t a good reason for it. Minimum-till in a true residue management package will be the trend going forward.

Vertical tillage is different from traditional cultivators in that it is only sizing residue and leaving it on the surface. The initial idea was to decrease the issues caused by traditional tillage methods while still breaking down the residue.

Are Compact Discs the Next Wave in Tillage?