By Dave Kanicki posted on February 1, 2015 | Posted in Department Management

While farm equipment dealers rely on their OEMs for a large majority of their parts, at least one-quarter of them say they’ve changed parts suppliers in the past 3 years. Parts pricing has been their biggest influence when a change in suppliers is made.

When Farm Equipment surveyed North American dealers in December 2014 about their performance of the parts segment of their business, choice of parts suppliers was also examined. By and large, nearly 80% of the dealers polled utilize new OEM parts in their shops and for over-the-counter sales. About 18% use non-OEM components, 4% of their parts were rebuilt or salvaged, and 1% came from other sources.

Nearly 25% of the dealers indicated that they had changed their source for parts during the past 3 years. Of those who have switched sources, 70% attribute their switch to parts pricing, while 30% said it was due to availability. 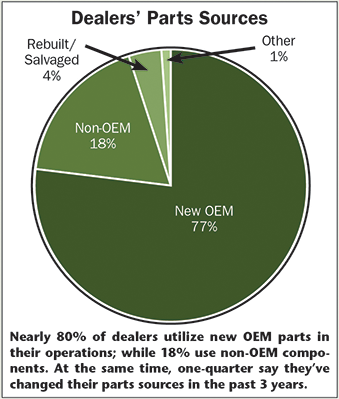 How Dealers Deal with Ag's Business Cycles: Are We Looking at a Downturn in Ag Equipment Sales in the Near Term?