While the unpredictability of commodity prices in the past year have given some cause for concern, the fact remains U.S. agricultural fundamentals continue to support the long-term health of the industry.

In his presentation during the USDA Agricultural Outlook Forum in February, Joseph Glauber, USDA’s chief economist, said, “Overall, the financial health of the agricultural sector is strong as it enters a period of lower crop prices.” The strength of the U.S. ag economy is based on the continuing growth of exports, as well as the sound financial footing of U.S. farmers.

According to Glauber, U.S. agricultural exports are estimated at $142.6 billion for fiscal 2014, $1.5 billion higher than the previous record level in fiscal year 2013. The forecast for grain and feed exports is expected to be $31.3 billion on greater volumes of wheat, corn, and feeds and fodders. 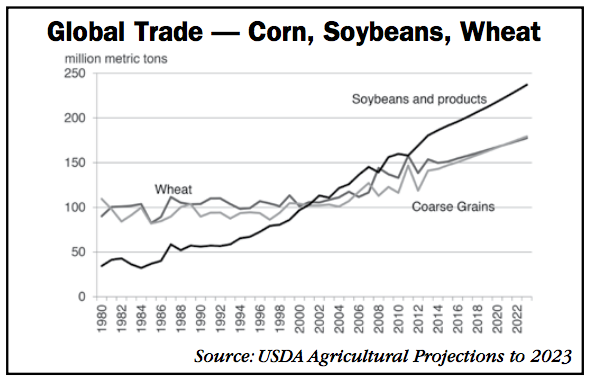 Global trade is expected to increase over the next 10 years by 15% for wheat, over 30% for corn and almost 40% for soybeans. “Based on projected yield growth, the world will need to allocate 50 million more acres of corn, wheat and soybeans, at U.S. productivity rates, to meet the increase in trade demand,” says Glauber.

Exports to China are forecast up $3.5 billion to a record $25 billion. Soybean export value is expected to increase on strong Chinese demand coupled with higher U.S. prices.

First-quarter (October – December) exports to China set a new record and are 23% ahead of the same period a year ago. China is once again forecast to be the top U.S. market, according to USDA. 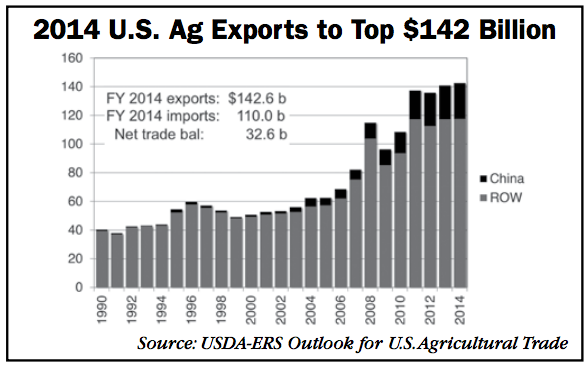 “While net cash income for 2014 is forecast at $101.9 billion, it is still more than $5 billion above the previous 10-year average,” says Glauber. The decline is largely led by a decrease in crop receipts, which are projected to decrease 14% in 2014. At the same time, farm expenses are projected to decrease by $3.9 billion in 2014, led by lower feed costs, according to Glauber.

Farm equity is projected to reach another nominal record, despite the substantial slowdown in asset growth and the expectations of higher debt levels. Glauber reported that, “Since 2006, more than $1 trillion has been added to farm equity, largely through increased land values.” But with lower farm income forecast for 2014 and increases in long-term interest rates, growth in farmland values is expected to slow and perhaps decline in some regions. 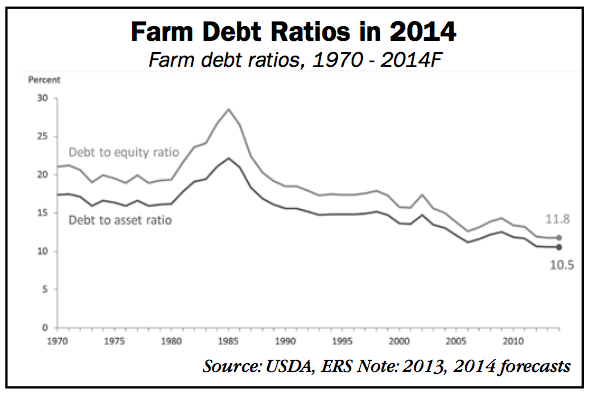 Glauber also noted the low debt of U.S. farmers. “Aggregate farm debt, measured as a percent of total farm assets, is forecast at 10.5%, the lowest level since ERS began calculating the measure in 1960 and considerably below the levels experienced during the 1980s farm financial crisis when debt-to-asset ratios were above 20%.

“To put the 1980s’ debt level in context, farmland values would have to fall by over 55% to raise the debt-to-asset ratio to 20% assuming no change in farm debt,” Glauber says.