What About Capital Expenditures?

So, we’ve heard a lot from USDA about commodity prices and projected planted acres for 2020, but little or nothing about capital expenditure expectations. It exists but doesn’t capture much attention from much of the ag industry. I suppose this is because most farm spending is dependent on commodity prices.

So, let’s start there. Speaking at the Ag Outlook Forum a couple of weeks ago, Robert Johansson, USDA’s chief economist, didn’t paint a particularly rosy outlook for rising commodity prices in 2020. Based on what we know now, there isn’t expected to be a lot of change in the year ahead. Here’s what Johansson presented during the forum:

Also, based on what is known at this time, exports are expected to rise modestly in the year ahead. Johansson said exports would increase by about $4 billion to $139.5 billion, an increase of nearly 3% during the 2020 marketing year. But … the three trade deals signed in the past year — USMCA, U.S.-Japan Agreement and Phase 1agreement with China — could “reset” the outlook for U.S. commodity prices. “Those three trade deals alone cover over half of U.S. agricultural exports,” Johansson said.

As for capital expenditures, USDA is estimating these will come in at a little over $30 billion. Excluding operator dwellings will drop it to slightly over $29 billion. Accounting for only vehicle expenditures (tractor, trucks and automobiles), the estimate drops to about $21 billion.

According to Brent Gloy with consulting firm Ag Economic Insights, “There are a few ways to look at this level. On one hand, it is a dramatic decline from the nearly $50 billion seen in 2014. On the other hand, today’s levels are back to those experienced in the early 2000s, when farm incomes were more stable.” 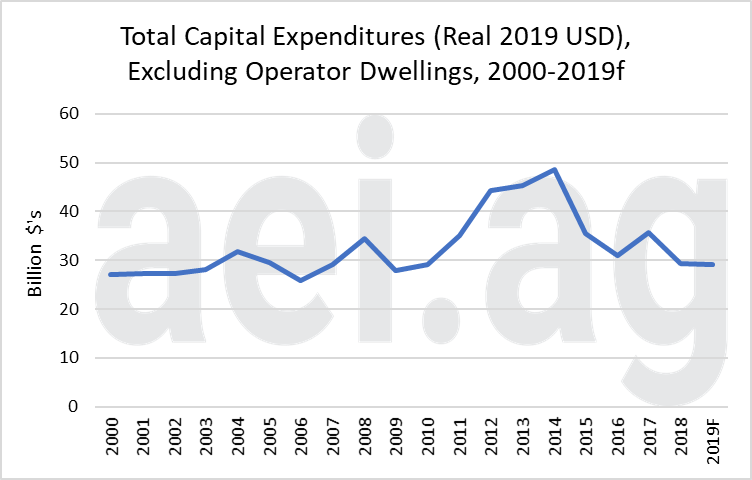 He says if only the 2000’s are considered, “It is apparent that capital expenditures are back to roughly the same levels seen before the most recent farm income boom/bust cycle.”

In other words, we’re moving back to more normal levels of capital expenditures by farmers. In many cases, we still have a ways to go.

What is Needed in Developing a Plan for Capital Expenditures?

[Video] What do High-Income Farmers Need to Develop a Plan for Capital Expenditures?