Machine vision and artificial intelligence, along with other precision technologies are laying the groundwork for cost-effective alternatives to herbicide use.

While “rural electrification” conjures up images of single light bulbs dangling from the ceiling of 1940s American farm houses, Case IH and the Switzerland’s Zasso Group have taken electrification directly to farm fields with technology that promises weed control without disturbing the soil or using chemical herbicides.

The XPower electrical weed control system took innovation honors late last year ahead of the 2019 SIMA conference in Paris, and is part of a much broader movement across Europe to address problems with popular methods of chemical weed control.

Industry watchers say 255 weed species have developed herbicide resistance in 92 crops in 70 countries, yet no new herbicide mode of action has been introduced in nearly 20 years. Herbicide resistance and the push to reduce herbicides in surface and groundwater supplies, are major factors in the renewed interest in mechanical and alternative weeding systems.

The XPower system, which uses a tractor/implement-mounted generator to produce on-the-go high-energy electrical current to “shock” weeds from the leaves to the roots and alter chlorophyll activity, is to be marketed by Case IH in a suite of new precision farming technology. 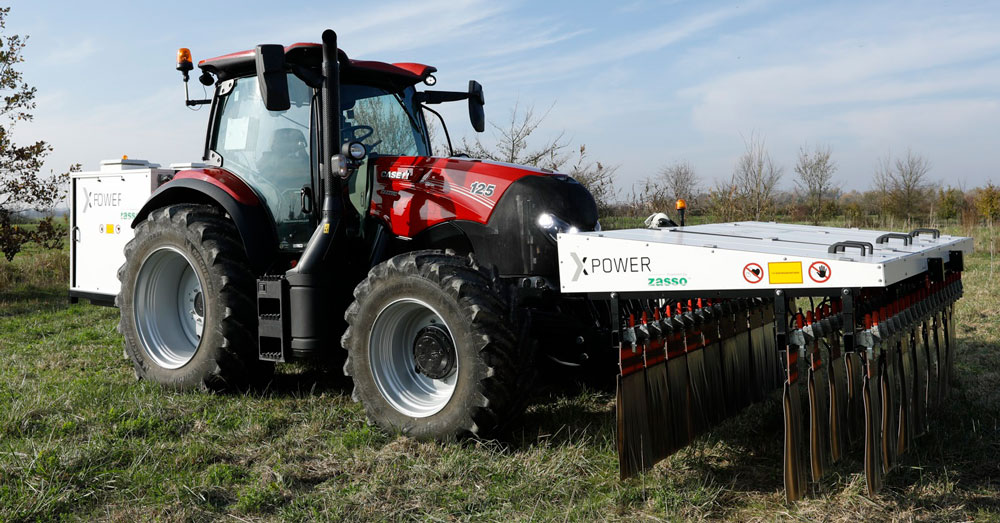 Maxime Rocaboy, product marketing manager at Case IH, says the technology has proven at least as effective as chemical herbicides in European trials and is more efficient, economical and crop-safe than mechanical weeding.

“At the same time, it is more practical, safer and cheaper than scorching or burning systems used for in-field weed control,” he says.

The XPower system has a nominal working width of 48-120 inches and uses sensors and camera-based guidance to apply electrical current to adjacent weeds to complete the circuit and effect control of a wide range of weed sizes.

Amazone, a German farm equipment manufacturer specializing in tillage equipment, seeding and other application tools, is adding mechanical hoeing to its portfolio for 2019 with the transfer of Maschinenfabrik Schmotzer GmbH’s product line.

“Thanks to technical advances that have only become practical in recent years, such as the combination of the hoe with camera and steering systems, it is now possible to achieve better coverage and weed control at a significantly more competitive cost,” he explains. “The combination of hoe technology with liquid fertilizer and targeted, selective application of crop protectants in the same working step opens further possibilities.”

Likewise, the UK’s Garford Farm Machinery Robocrop InRow system uses digital video cameras to capture images of the crop ahead of the toolbar. Those images are then analyzed to identify the position of the individual plants and that information is used for lateral steering of the hoe and individual synchronization of the InRow weeder discs. The Robocrop computer is constantly adjusting the rotational speed of the discs to suit the variability of plant spacing and weed populations.

The system is accurate to just under 0.5 inches of detected plants and uses the specially-shaped rotating discs to cultivate roughly 0.5-1 inch within the crop row. Tests show a 20-foot working width hydraulic InRow system can operate at nearly 10 mph for about 10 acres per hour weeding. Electrically-driven models are even more efficient.

In the Netherlands a similar machine, the Steketee IC Weeder, also uses camera vision to calculate crop plant position and then hoes around them.

Recently making an entry into the U.S. market in California lettuce fields, the IC Weeder covers an 80-inch bed of lettuce (5 rows) and work at roughly 3 mph as growers seek to keep lettuce leaves clean. Joe Sutton, of Sutton Ag Enterprises in Salinas, the sole U.S. distributor of the machine, says where keeping leaves dirt-free is not a priority, the Weeder can be operated faster.

Closer to home, California equipment developer Blue River Technology recently unveiled its Lettuce Bot, a driverless robot which scans crop rows using algorithms and machine vision to identify each sprout in the field as a lettuce or weed image in as little as 0.02 seconds and uses a targeted jet of herbicide to spray unwanted plants.

Since that time, BRT went on to develop “See and Spray” technology which uses a massive library of plant and weed images to allow the system to differentiate between the slightest differences between crops and weeds.

By late 2018, the technology was displayed in the southeastern U.S. operating in standing cotton, controlling in-row weeds with accurately-timed-and-aimed herbicide applications at field speeds up to 6 mph. Because of precision application and inherent accuracy of the aiming system, officials estimated the sprayer could reduce the use of applied herbicides by more than 90%.

Look for further development of this technology in North America since John Deere dropped $305 million in mid-2018 to acquire BRT.

Ahead of the Curve: Site Specific Weed Control