Boosted by the diesel exhaust fluid handling needs with the new Tier 4 Final engine regulations, fuel trailers are a niche product that makes your farmer’s greatest investments — the tractor and combine — more efficient.

No professional sales organization gets too excited about promoting a unit that anyone with a welding torch (or a buddy with fab shop) thinks can be done as a “do-it-your-selfer.” But as the stakes of inefficient operations get higher (not to mention fuel contamination concerns and liabilities for highway driving with fuel), today’s farmer is starting to see professional fuel handling as an extension of his “fleet.”

So fuel trailers are becoming more visible at farm shows, on dealer lots and in shortline manufacturers’ catalogs. Not only must farmers safely travel with more fuel capacity across ever-growing distances, but they also want to do so at highway speeds — rather than “putting around” with a 300-gallon drum bolted to a flatbed.

The Tier 4 regulations, and the resulting Selective Catalytic Reduction (SCR) technologies that use diesel exhaust fluid (DEF), have brought a significant “shot in the arm” for professionally-constructed and outfitted fuel haulers. “Farmers have gotten by with a homemade trailer,” says Brad Dinkel, Dinkel Implement, “but figuring out how to handle DEF is more than most want to mess around with.” Couple the safety and DEF handling needs with the desire to add “service truck” type options, and some dealers are realizing a perfect storm for sales.

For this issue’s “How to Sell Series” on fuel trailers, Farm Equipment interviewed three dealers in late September:

When it comes to segmenting your customer database to identify the top prospects for fuel trailers, dealers agree that your best bets are the upper-end of the database — and those with lots of acres and great distances to cover. “If their farm is 4,000 acres, then they’re traveling more and it becomes more important,” says Dinkel.

Harms cites the smallest minimum for fuel trailers at 1,500 acres (Smith noted a minimum target of 3,000 acres), but says that they should also have 25-50 miles to cover. He adds that about 80% of his buyers for new fuel trailers are upgrading to a professionally built model.

Smith and Harms both offered a profile of the type of farmers that are most attracted today’s fuel trailers.

Smith describes the 35-45 year-old farmer who operates in the 3,000-acre range as his best target for fuel trailers. “That younger guy wants his equipment clean and slick looking (vs. unattractive and bulky trailers). He’s the one more apt to farm 15-20 miles apart. He tends to have less help; his wife usually works.” That younger generation values efficiency, Smith says, is more aggressive and isn’t as consumed by each dollar spent the same way his dad and granddad were. That translates into a willingness to invest where he gains efficiency and better use of his time. 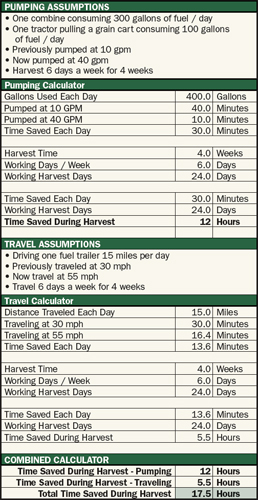 This model shows the amount of time a one-combine, one-tractor operator can save through a 4-week harvest alone with a 40-gallon/minute pump and traveling at normal highway speeds. (Source: Thunder Creek Equipment)

Harms, meanwhile, has a customer who now has three trailers in his fleet, and finds the investment worth his peace of mind. “Each day, before his crew shows up in the morning, he is there with the fuel trailer and has every machine filled up and ready to go,” he says. “Then, he’ll stop by in the afternoon and top them off. He has 50 miles to travel between farms, so it’s invaluable for him not to worry about fuel and downtime.”

Dealers agree that keeping a unit or two on-hand is critical in order to expect any success with the still-developing fuel trailer market, as it tends to remain an afterthought purchase for most farmers.

None of the dealers has a specific marketing scheme for trailers, relying rather on word-of

mouth and a presence on the lot. It’s a simple-enough proposition that inventory can sell itself, say dealers, with most of the dialog covering not why to buy, but which options to specify.

“With our better customers, we find that trailers can come up in conversation,” Dinkel says. “Then, we’ll take them outside and show the features and benefits. The fuel trailer is still new and different enough that it’ll get people coming onto the lot,” he adds, noting that like any specialty product, it gives farmers — including those loyal to a different color — a reason to stop by in the first place.

Harms adds that inventory is necessary for impulse buys. “Having it out there allows them

to kick the tires, and many will return in a day or two with their mind made up.”

While it’s been suggested that a fuel trailer sale can be easily worked in (see “Rolling the Trailer into a Tractor Purchase” at left) and bundled with the initial tractor or combine sale, dealers find that it hasn’t yet worked that way — at least to date.

Smith, as a shortline-only dealer, doesn’t have the opportunity to marry fuel trailers to a brand new tractor or combine. At least with his sales process, he maintains that it works best as a singular-priced item.

Harms agrees, adding that he hasn’t found a $20,000 trailer purchase to make a big enough

Rolling the Trailer into the Tractor Purchase

A dealership making a standard 3% major line margin on a $250,000 tractor sale will see a profit of $8,250. By incorporating a $20,000 fuel trailer into that sale (with the potential for a 15% shortline margin), that’s another $3,000. Bundling the fuel trailer together with the new tractor order presents an additional 36.3% profit opportunity.

difference on a $450,000 sale. But he pays close attention to each conversation that takes place about fuel trailers and stays close to those customers. “If people ask about it even once, sooner or later they return to buy it.”

Dinkel admits that his dealership hasn’t pushed the trailer purchase at the time of tractor sale. “Because of the pricing, we’ve tended to keep it a separate purchase, though with the new engine technologies now, that may change.

“What’s happened so far is the farmer who buys a brand new tractor thinks there’s a cheaper way to handle the fuel than buying a new trailer,” Dinkel says. “But by doing it, he’ll learn there is not a more convenient way. They start off with the cheaper status quo, but the more they do it, the more convenience matters to them. Eventually, they’ll come to see the advantage of hauling 1,000 gallons instead of small amounts in the back of their pickup trucks.”

Each of the dealers said that year-end purchasing is brisk, and that fuel trailers offer the kind of easily-communicated ROI discussion that makes farmers confident in parting with their excess cash after harvest. Smith says December is the most important sales month, followed by a close second in August as farmers’ preoccupation with harvest hits them front and center. 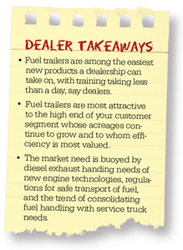 When asked about the learning curve for selling fuel trailers, each of the dealers say there’s little to worry about. No agronomic research, not a lot of working parts to cover with the sales staff, they say, just an awareness of the features/benefits and the other choices on the market.

Jaycox got its start in fuel trailers after a cold-call by a Thunder Creek rep, recalls Harms, who said he and his team were retailing units 6 weeks later. He recalls that they were comfortable in selling them within a day, and said there are now online tutorials that get you up and running even faster. It’s a rare thing today for any dealer to get “schooled up” on a new line in 24 hours, he says.

Dealers agree that fuel trailers, as a relative newcomer, still remain more of an afterthought for farmers than something they seek out. But each believes the outlook is good, particularly as machine populations with SCR continue to grow. “The need to handle DEF is not going anywhere, and will be standard on these trailers instead of an option,” Dinkel says. 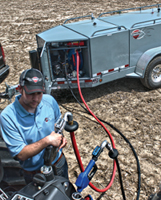 Handling of Diesel Exhaust Fluid. The newer SCR engine technology uses diesel exhaustfluid (DEF) as an after treatment that is sprayed into the exhaust system. Thunder Creek’s Equipment’s Fuel & Service Trailer Business Case points out that DEF is susceptible to contamination, so the mixture and cleanliness of the fluid is critical to its effectiveness, with as little as 0.01 teaspoon of minerals able to take an entire tanker load off-spec. Handling DEF in a home-made trailer can result in contamination causing malfunction and breakdown, and could even void warranty, as has occurred in other industries

Growing Numbers. Paul Hottovy, Duo-Lift Manufacturing, notes that the machine population requiring DEF on emission-controlled diesel engines is going to increase significantly in the years ahead. “Most farms in North America will evolve to have fuel trailers as an integral part of their operation.”

Size & Mobility. Grain producers continue to grow in size and distance covered from their home base. As farmers’ increase the size of their equipment to accommodate the growing size of their operations — it all means that logistical changes are in order to keep the fleets running.

Shop on Wheels. Fuel carts are now outfitted with options such as toolboxes, generators and air compressors. Larry Smith of Avoca Spray Service sees more farmers opting for trailed vehicles pulled by pickups rather than dedicated shop vehicles, and the fuel cart is a natural for this dual purpose.

Since starting with trailers in 2011, Jaycox Implement sold 70 units and Harms expects to see at least that many sales in the next 2.5 years. More competition, however, is limiting the dealership’s geographic reach. Where Jaycox sold trailers as far away as 5 hours a few years ago, it is now limited to a 120-mile radius as more dealers have started carrying them.

Ag Equipment Intelligence estimates that SCR engines requiring DEF will be roughly 12,000 in the U.S. alone next year. So the numbers for bullish growth appear to be there.

Unlike many other products a dealer will carry, there’s very little in the way of after-sales service with fuel trailers. In fact, it’s likely the dealers will never see that trailer again once it leaves their yard.

Jaycox, however, has added DEF tank refills to its service offering. “We’ve been doing bulk oil delivery and parts drops, and bulk DEF is just another extension of the service we want to provide to customers and prospects,” says Harms, who isn’t aware of other competing dealers entering the DEF tank-fill business. This service is another way to bring in customers who would otherwise go to other dealerships or retail outlets, while maintaining attention on the fuel trailers.

Smith says if the farm economy continues at its current pace, he expects 15-20% annual growth in fuel trailer unit sales, perhaps 10% if the farm economy slows. “It’ll be a good market but not a boom market,” he says, adding that it’s not a sale that will be done solely by a servicing dealer. “But when farmers’ cash flow becomes tight, it will likely be one of the first areas cut.”

How to Sell: Fuel Trailers

Ahead of the Curve: Growth of Strip-Till Creates Sales Opportunities