With a 27% “bump” in unit sales in May vs. a year earlier, it appears that the prospects for compact tractors are improving significantly following 5 years of relatively flat sales.

In May of this year, the Assn. of Equipment Manufacturers reported 17,193 compact tractors were sold in North America. This was up from 13,535 units sold in May 2012, a 27% increase. This also approached the highest monthly sales for May since 2006 when 17,872 units were sold. 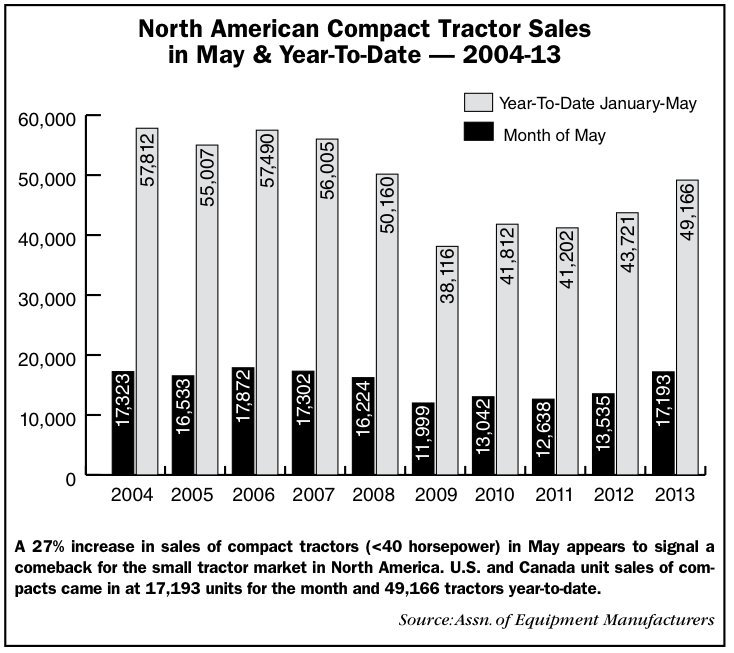 In Ag Equipment Intelligence’s most recent “Dealer Sentiments & Business Conditions Update” survey, not surprisingly Kubota dealers, which specialize in smaller tractors, reported the highest sales growth at 13% (Deere +9%, Case IH +6%, New Holland +5% and AGCO +5%).â€¨Curt Siegmeyer, analyst for Cleveland Research Co., which part- ners with Ag Equipment Intelligence in the monthly poll of farm equipment dealers, commented, “We are seeing strength in the smaller tractor market, which appears to be supporting the strength in Kubota’s sales.”

One dealer said, "The strength in small tractor sales surprised me.”