AGCO has begun further expansion of its Jackson, Minn., manufacturing center. During the next three years, AGCO will invest an estimated $42 million in infrastructure, increasing production capacity and efficiency in order to help meet growing demand for the tractors and application equipment built there. Eric Fisher, AGCO director of operations in Jackson, was joined by city of Jackson Mayor Wayne Walter in a groundbreaking ceremony at the site May 7, 2013, to mark the start of the facility improvement project. 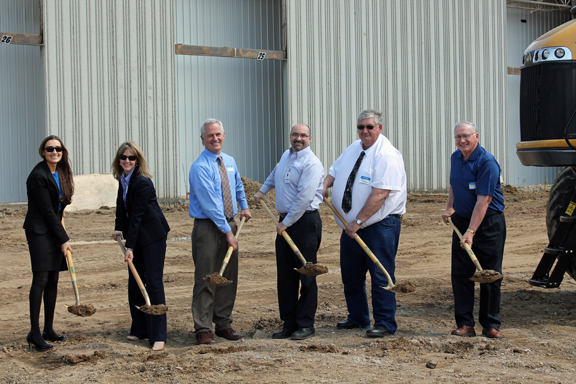 The three-year endeavor is made up of seven phases affecting all areas of the campus, including component manufacturing, the tractor assembly line and the application equipment assembly line. Once completed, the expansion will create 75 additional permanent jobs at the facility, bringing the total number of employees to more than 1,200. The project will increase production capacity by 25% for both the tractor and sprayer assembly lines while maintaining best-in-class product quality.

The first phase, scheduled to be complete fall 2013, includes a 30,000-square-foot expansion of the component manufacturing area, which will increase capacity by 20% and improve efficiency by reengineering the flow of materials to assembly stations. The installation of an additional robotic welder and a sheet laser will improve productivity and positively impact all equipment built in Jackson.

Fisher comments, "This expansion builds on the excitement that began in 2011 when AGCO chose Jackson as the location where high-horsepower wheeled tractors for North America would be built. Continuing to invest here reinforces AGCO’s commitment to bringing our North American customers high-quality tractors and application equipment built how the customer wants them and delivered on time."

Remaining phases include expanding the tractor assembly line for increased production capacity, an in-line paint system for the application assembly line, and cutting- edge testing capability of our finished products.

In June 2012, AGCO expanded its Jackson location to bring production of Massey Ferguson and Challenger wheeled row-crop tractors to North America. That expansion included AGCO’s first North American welcome center, Intivity Center. These efforts contributed more than $17 million to the local economy by adding more than 200 jobs. This brought the total number of professional, support and skilled manufacturing positions at the facility to 1,050.

Intivity Center, a 17,000-square-foot, state-of-the-art visitor center, showcases the farmer-focused innovation behind the brands upon which the company has been built.  It offers an extensive collection of historical artifacts — many never before seen by the public — and includes a glimpse of the future of agricultural equipment through interactive displays demonstrating equipment technology in development at AGCO. For more information about Intivity Center or to make reservations to tour the AGCO Jackson manufacturing center, visit http://jackson.AGCOcorp.com.

Farm equipment manufacturing has been a part of the Jackson community since 1963, when Ag-Chem Equipment Company was founded as a distributor of spraying equipment. Ag-Chem was purchased by AGCO in 2001. Jackson is home to Challenger and Massey Ferguson high-horsepower wheeled row-crop tractors as well the Challenger track tractors and application equipment.