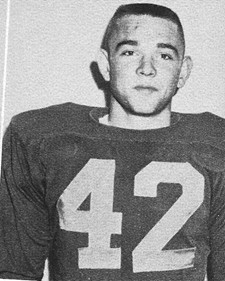 Irwin, a star tight end, was signed out of college by the Los Angeles Rams. "The standard contract back then was $9,000 a year," Irwin says of that contract, which he has kept for 50 years. "You got paid three-fourths of that that $9,000 on a bi-weekly basis throughout the season. Then, if you made it to the end of the season you got the rest of the 25%."

Irwin made it to one of the final cuts before getting released. While he had an opportunity to play in the American Football League as he left Los Angeles, Irwin decided that football wasn't for him. "So I went back to my folks' farm in Nebraska," he says. "A semi-pro team in Omaha, the Omaha Mustangs, called and wanted me to play for them. I said I'd come down there to play, but told them they had to help me get a job. I had a teaching degree, but school had already started by that time so all the jobs were gone."

Within a week, he landed a job with International Harvester in the Omaha warehouse operations, and the rest is history.

"I got a chance to move my way up the ladder. I was fortunate that IH firmly believed that everyone in the sales and marketing division had to first spend time in a company store to understand not only the retail side of the business, but also the customer and his expectations. It was an invaluable experience."

The one-year training program exposed him to a certain amount of time in the parts department, out in the county and in the service department before spending the second half of the year in the sales department. "You saw all aspects of a retail operation and developed a good understanding of what a dealer goes through on a daily basis," he says. "To me, it was invaluable as I moved through the company to have had a good understanding of what the dealer goes through on a day-to-day basis."

His career, through all the various mergers and acquisitions, lasted 40 years, 4 months and 4 days. "During that time we moved 15 times," he says. "It was a lot different back then. Forty and 50 years ago, very few spouses worked so it was easy to just pull up stakes and move to wherever the company wanted you to go. When we moved from Omaha to Grand Forks, Neb., we had about 2 days notice and within 15 days we were living in Grand Forks. It was nothing that you thought about or even contemplated; that's where the job was, so that's where you went."