This installment of Trade Values & Trends looks at the reported monthly sales of used four-wheel drive and large row-crop tractors over a three-year period.

There is a strong market for late-model, low-hour used tractors. As the price of new tractors rise, it follows that values of used tractors would also increase. Plus, farmers are doing well financially and are willing to spend more money for the technology found in newer used tractors. 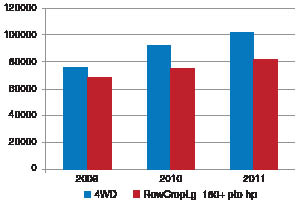 Figure 1. The average sale price for used four-wheel drive and large row-crop tractors has risen dramatically between 2009 and 2011.

Figure 2 and 3 chart the volume of machines reported sold, broken down by four-wheel drive and row-crop tractors. In 2011, the data shows that sales of 1-5 year-old four-wheel drive tractors increased 24% over 2009 numbers. The rising sales volumes are attributed to farmers buying for tax reasons and building their fleets as they expand their operations. 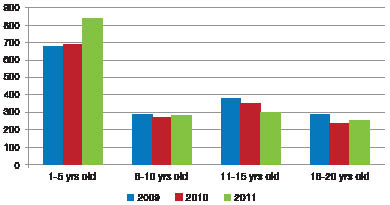 Figure 2. Reported sales of late-model used four-wheel drive tractors spiked in 2011, partly as a result of farmers who were flush with cash from high commodity prices. 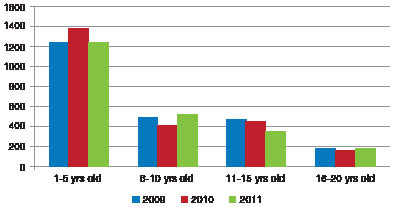 The fact that more 1-5 year-old four-wheel drive tractors were sold in 2011 could indicate there were more of those machines on the market. As a greater number of well-financed farmers buy new tractors, they’re trading in newer used machines.

These trends are also representative of the buyers themselves. When it comes to buying equipment, there are several tiers of customers. Farmers with smaller acreage may be shrinking in number, but they’re still buying 6-10 year-old machines. For others, the value of 16-20 year-old machines is coming down to where they’re affordable. These farmers won’t put that many hours on the units and price is a driving factor in the purchases.

IRON Solution’s data says the number of 11-15 year-old machines reported sold is trending downward, which may indicate they’re still too expensive for the lower tiered buyer. Plus, the technological leap between tractors built in 1992 vs. 1997 may not be significant enough for lower-tier farmers to justify the additional cost.

Dealers taking in four-wheel drive or row-crop tractors on trades can expect a better turn on a 1-5 year-old machine. Although dealers will pay more money on the trade-in, it will not sit on the lot for long. This is particularly true with four-wheel drive tractors. Dealers are selling a greater number of late-model machines than they did in 2009, which is lifting the average price.

While adopting the latest tractor technology is an incentive for farmers who can afford to buy the newest tractor on the lot, there is another factor to consider. Concern over the long-term reliability of the advanced electronics may be a reason farmers are trading up more frequently.

With Tier 4 interim engines making their way into the marketplace in order to meet U.S. Environmental Protection Agency (EPA) regulations, there’s always talk of a “prebuy,” where customers rush out to purchase machinery before significant design changes are implemented. IRON Solutions’ data reveals this is not occurring to any great extent. One of the reasons could be that farmers are not sure which emissions solution to adopt. The EGR/SCR debate may likely become a modern version of the Beta/VHS videotape scenario from the 1980s, and farmers are not rushing to place their bets just yet.