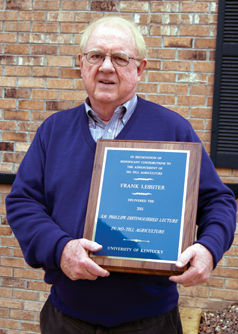 Frank Lessiter, chairman and editorial director of Lessiter Publications, is the 2011 recipient of the Shirley Phillips No-Till Pioneer Award, which was established to honor pioneers of the no-till movement.

The award was named for the late Shirley Phillips, who worked from the start with Harry Young Jr. of Herndon, Ky., in getting the no-till movement started in southern Kentucky. This was the starting point for no-till in the U.S.

Phillips was an extension agronomist at the Univ. of Kentucky and later served as an administrator with the university's cooperative extension service.

Lessiter was the sole lecturer at the Univ. of Kentucky's program in November, delivering an address of "No-Tillage History: From 7/10 of an Acre in 1962 to 232 Million Acres Worldwide." The timing of the honor is appropriate, as the industry celebrates the 40th anniversary of No-Till Farmer that Lessiter started in 1972, and the 50th anniversary of the first no-till production field in 1962 in southern Kentucky.