While a large majority of North American farm machinery dealers believe 2011 will produce solid sales numbers, most are expressing concerns about how their customers perceive the new Tier IV diesel engines that are being rolled out for the new selling season. The uncertainty of how farms will react to the new engine technology and higher pricing (estimated 4-9%) could result in farmers holding back new equipment purchases until, perhaps, the second half of 2011 after they’ve seen the new engines in action. But then again, the changes are pulling sales of Tier III forward in 2010.

All diesel off-road engines of 174 horsepower and higher are required by regulatory agencies in both the U.S. and Canada to meet stringent air emission standards for controlling NOx and soot. To meet the new air standards, equipment makers have invested heavily in developing new engine technologies, and farmers will see additional costs for those changes on 2011 tractor invoices.

At the same time, farm equipment manufacturers are pursuing differing technologies to satisfy the new emission limits — at least on the interim Tier IV engines. It remains to be seen how they’ll approach the even stricter standards imposed by the final Tier IV requirements that will take effect in 2014.

In addition to going through the learning curve of understanding and working with the new engines, having to choose between these two radically different approaches is also creating significant confusion among potential buyers. 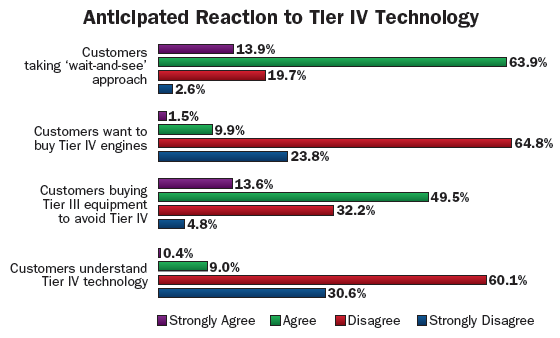 Equipment dealers see farmers’ resistance to the higher price tags of Tier IV equipment as their biggest challenge in selling machinery with the new engines in 2011. They say customers are also concerned with equipment reliability, maintenance and additional operating costs.

Lack of Knowledge. In its “2011 Dealer Business Trends & Outlook” survey, which was conducted in the last week of August, Farm Equipment asked dealers about their major concerns with the Tier IV engines.

But even more telling is that few dealers — 9.4% — “Agree” or “Strongly Agree” that their customers understand the new Tier IV engine technology. And this lack of knowledge, the dealers say, will hinder sales during the coming year.

Most farm equipment dealers (77.7%) believe their customers are or will take a “wait-and-see” approach to the equipment with Tier IV engines.

Pricing Concerns. Dealers say they and their customers share several concerns when it comes to Tier IV equipment. Chief among them is the higher prices for equipment with the new engines. A California dealer told Ag Equipment Intelligence, “We have operational and cost concerns about the new equipment. These will only get worse when Tier IV final products hit the market. There is a lot of trepidation on the part of the consumer regarding the reliability and maintenance costs of this equipment.

“At the same time, the government (State of California) is pushing to adopt this technology faster than the normal machine life cycle would dictate. This could prove to be fatal for growers and ranchers who are already on the edge.”

Other major worries presented by the introduction of the Tier IV engines include equipment reliability, maintenance and service, and operating and consumable costs. 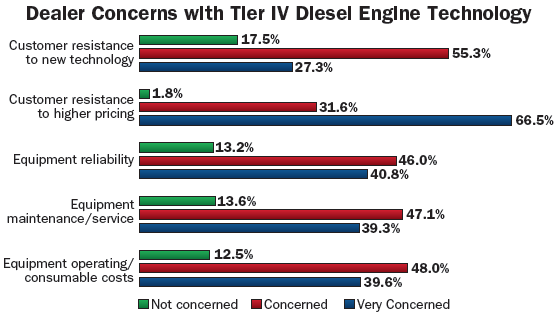 Few dealers believe that their customers are eager to purchase equipment with Tier IV diesel engines, in large part because they don’t fully understand the technology behind the lower-emission machinery.